Note : This article ends with a link to a review of OVO’s service. WhatPhone was provided a free SIM with this 100GB of data bundle, from OVO, for that review.

We have seen sales of Mobile Broadband services on WhatPhone rocket in the last few months, a trend started by OVO almost exactly a year ago. Current denominations of data plans start at 2GB a month (this and other lower end data plans appealing especially to those who use tablets) and rise to the 100GB plan that OVO launched today. The large end of the data bundle family serves those with external ‘dongle’ mobile broadband connections, usually for laptops.

We have covered the ‘phenomenon’ previously.

Without rehashing that article, the most important aspects of these 25GB+ bundles are :

We have also answered the question ‘How to pick the right mobile broadband plan.

What do we think of OVO’s plan, in a nutshell?

We think OVO’s plan is great. What they’re offering aligns completely with the research we’ve done recently. Australians want speed and reliability above everything else. OVO seem to understand that.

Matt Jones, CEO said (this from the Press Release) “Mobile broadband’s speed, reliability, ready availability and portability are all advantages, particularly compared to fixed broadband that is plagued with connection delays and impacted by weather and the quality of the connection to the home. And for the majority of Australian households that will consume less than 100GB of data a month, it’s an immediate fix to the constant buffering and drop-outs experienced when we all sit down of an evening to stream the latest episode of our favorite TV show.

Matt from OVO claimed download speeds of up to 100Mbps (download) – much faster than almost any current fixed broadband connection and as fast as the best you’d get under even the most expensive tier of new fixed NBN plans.

As always, we trust and verify, so, using an OVO service and a device which offers the best possible connection speeds, we ran a speed test. Holy cow. He’s right. 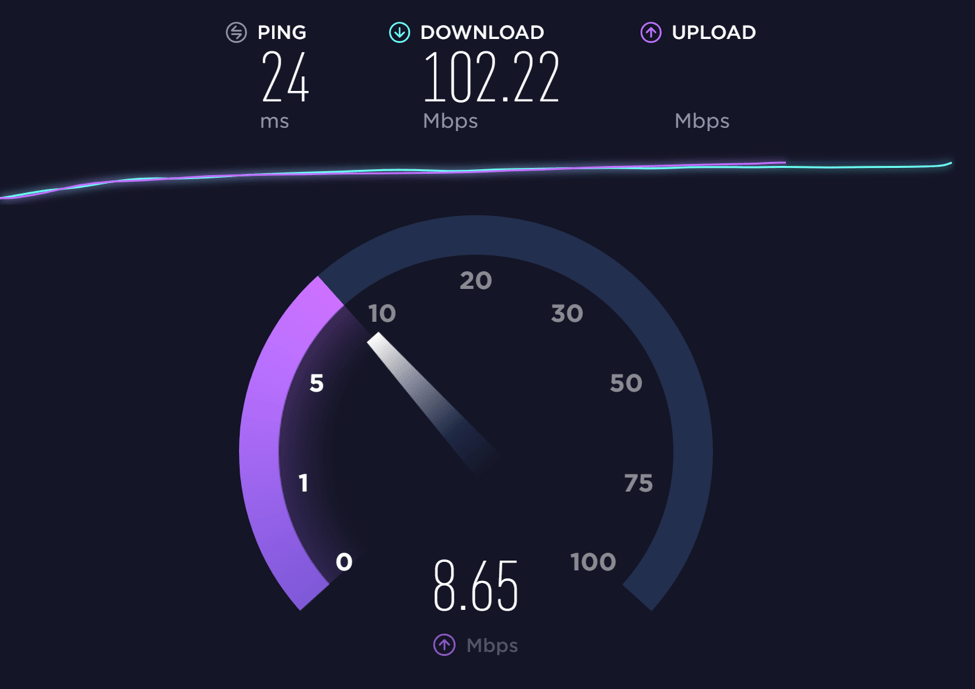 The below is a visual summary of the results from one of WhatPhone’s recent survey questions. 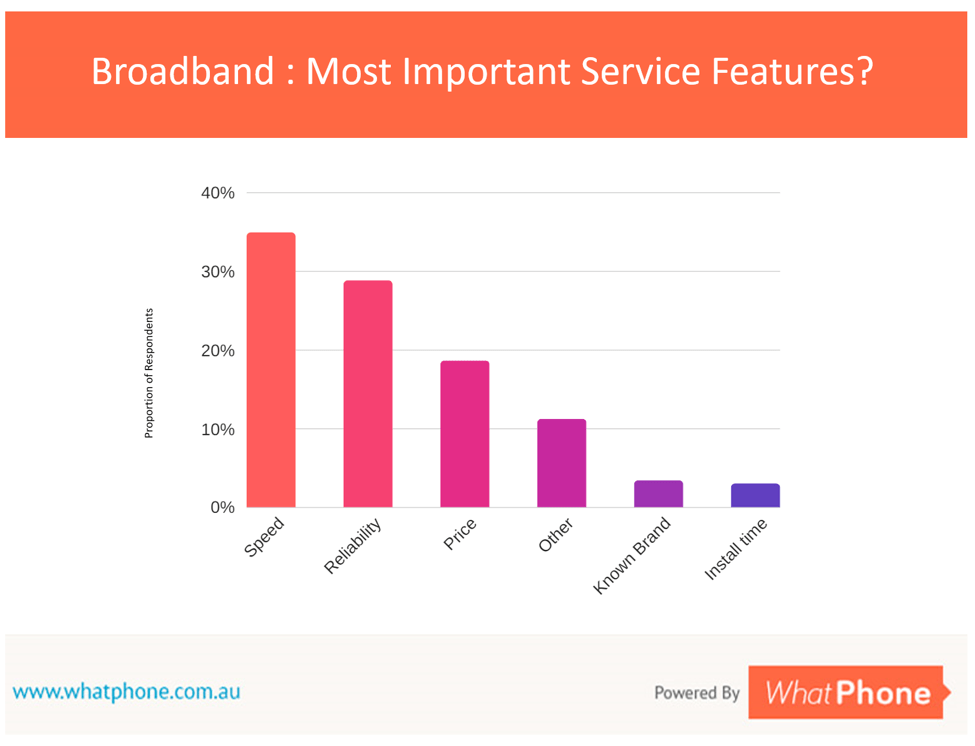 Our survey reveals an answer which might not have been immediately obvious. Speed and reliability of mobile broadband services are more important to Australians than the price of that service.

Also, the fact that people will buy this service from unknown brands is significant too, especially for OVO who, despite a recent push in to radio advertising are still to become a household name.

Some basics to be aware of when considering one of these mobile broadband services:

In short, pick a 4G, prepaid mobile broadband connection for the best experience. 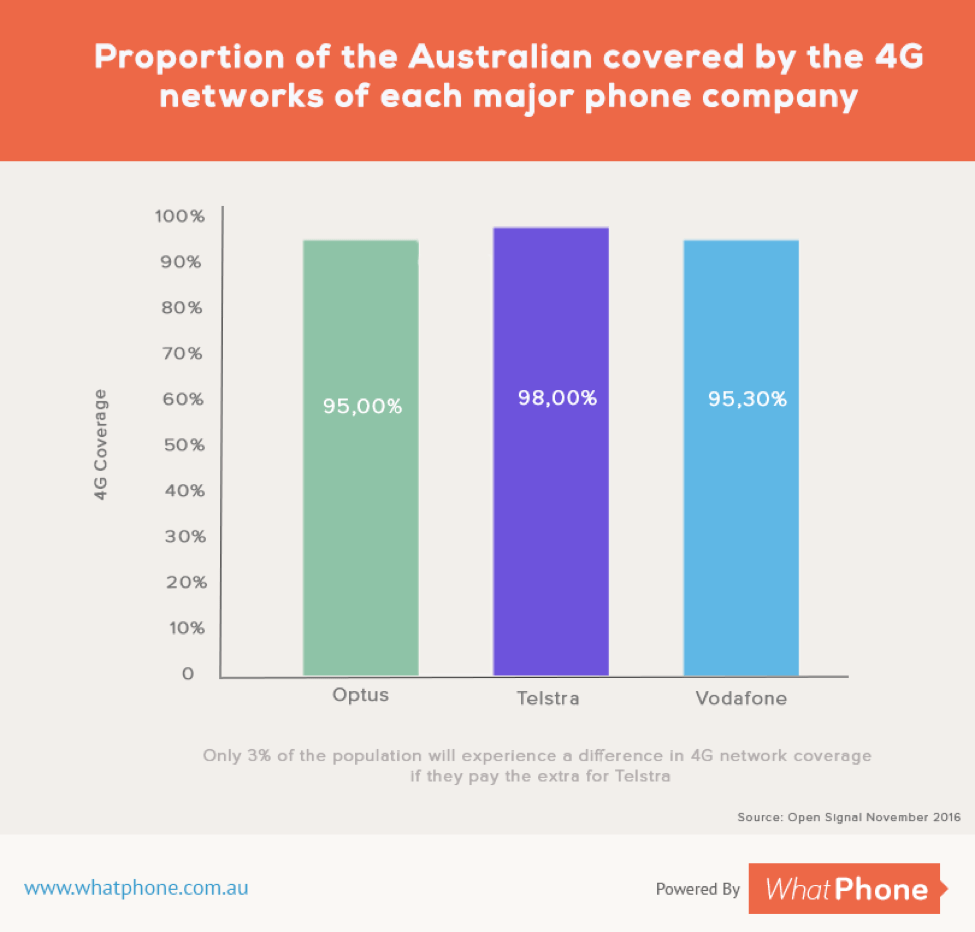 Mobile broadband is obviously a key component of OVO’s plan range. This announcement of a 100GB bundle come to their first bundle Almost exactly a year ago.

This new plan is about 100% bigger than the predecessor significant in itself for reasons we call out below.

You can find out more about OVO in our review. It’s worth reading. We’re focused on mobile broadband here but they do have other aspects to their service, like a raft of zero rated content.

How much data do people use on fixed internet connections?

Quote : The short answer to this question is that, at the moment, people use : 3 or 4 times the amount of data in their fixed line connection as is included in OVO’s plan.

The short answer to this question is that, at the moment, people use : 3 or 4 times the amount of data in their fixed line connection as is included in OVO’s plan. 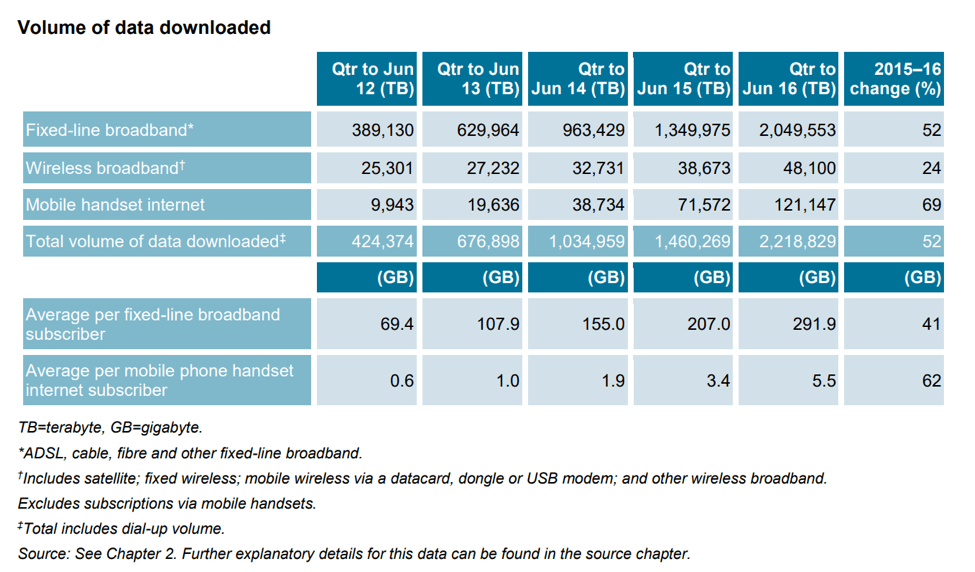 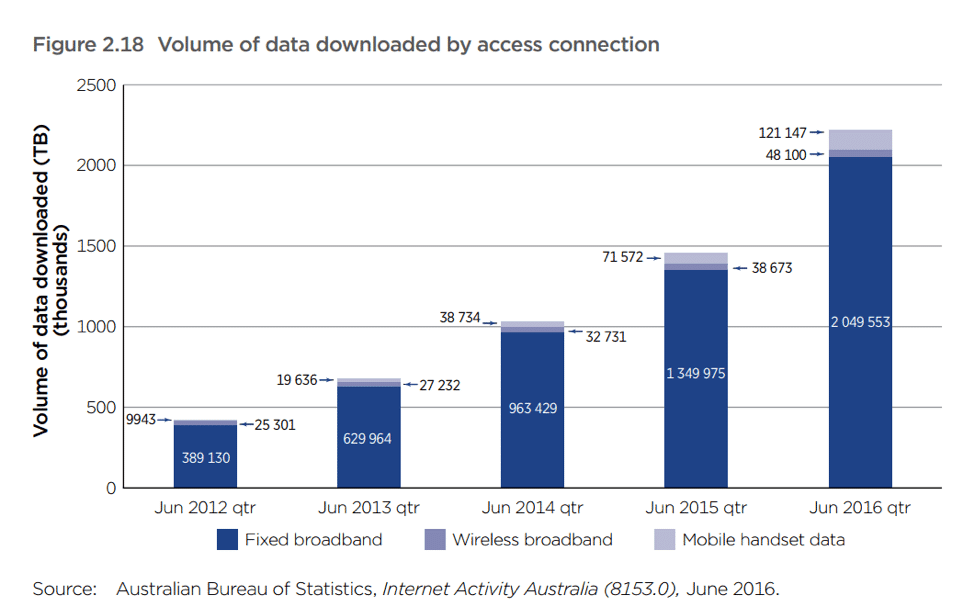 Above : Source : The ABS quoted in ACCC documentation

Note also that the amount of data people are using over fixed connection has risen 52% in the last year and about the same for previous years.

My experience is that the ABS stats tend to trail real usage behavior by at least a year. And remember, these statistics are from the period in which we saw the arrival of Netflix, a confounding variable if ever there was one.

Remember, however, that these numbers are averages. That means there are as many people below average as there are above it. Most likely, individuals or couples rather than families would fall in to that bracket. There are also groups of users who would value this service above others, whether or not they used the full 100GB allocation. People who move house frequently, students and renters, for one, would be happy to avoid the set up costs associated with fixed broadband (where it routinely costs $100 to move a connection from one property to another. ) Families who like to keep the kids entertained on iPads in the back of the car on long journeys and business people too may be prepared to pay the extra for a mobile service, perhaps in addition to their fixed connection at home.

What 100GB plans could mean to the industry

Without getting too geeky on this new plan type, the potential ramifications for the industry as a result of 100GB mobile broadband plans are substantial.

First, as we can see, in the last 12 months, OVO have doubled the data they’re offering in their plans. Usage of fixed services is increasing at around 50% per year. 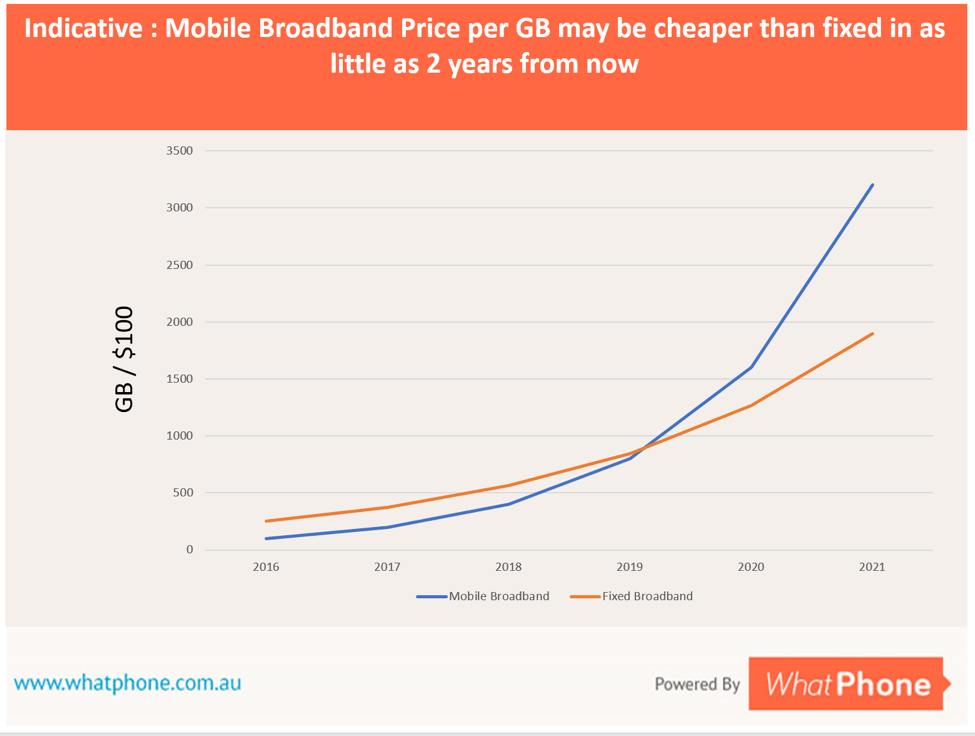 It’s only an indicative chart. We’re not comparing apples with apples, exactly. However, it seems reductions in price / GB for Mobile are outpacing price reductions in Fixed. That means that, as soon as 2019, Mobile Broadband could offer price performance which is better than fixed and which provide enough data for any kind of user.

Industry economics seem likely to exacerbate this trend. The wholesale cost of NBN connections starts at about $60 per month. That means if any telco, including Telstra or Vodafone , want to connect a new customer to the NBN, they can charge, say $70 per month for it but have to give $60 of that to the government in the form of NBN Co.

If, on the other hand, Vodafone, or Telstra, want to connect a customer to their mobile network, using a mobile broadband bundle, they can charge $70 for it and make $70 per month. They own the mobile network, they lease access to the fixed network. The mobile option (considered at the margin of a new connection) is 80% – 90% different.

That’s a big profitability difference and an enormous incentive for the big phone companies to sell mobile plans, not NBN fixed plans.

Speed and reliability are important to people when they’re buying a mobile broadband service. OVO have made a great start here offering their own speed test facility:  notbloodynecessary.com

However, this is only the start. We’d love to see telcos advertise availability average download speed statistics. That is the speed people can expect to get at peak times.

We’d also like to know the proportion of time the network is available for users. Every phone company has network outages. To compare the phone plans we’re picking, we need to know those numbers. Fast food restaurants have to tell us the calories in the food we buy. Is it that different that a telco should tell us we could expect 5 hours downtime a year and an average speed of #*s ( out of a possible 5 )?

The word innovation is used every day. Whether you’re a customer of OVO or Optus, the most important things about this service are speed and reliability. Providing these data points would be an innovative step. OVO’s website gathers that data. Perhaps they will open the Kimono and share it. How does their mobile service compare to fixed? They buy their service from Optus. Is mobile as reliable as fixed??

As you can see, the proportion of people who are using Mobile Broadband is tiny compared to fixed. So is the amount of data transacted over wireless data networks at this time. But a number of factors are pushing Mobile Broadband as the preferred service both from a customer and company point of view.

OVO’s 100GB plan is a bold move. There is a maximum number of people (someone once told me 200) who can access a single mobile tower for data at any one time. While the ACCC is explicitly looking into speed claims, Mobile Broadband is a mile field for statistical claims. That said, I tested the connection and my personal experience was exactly as claimed.

In 2017 / 2018, this Mobile Broadband package is probably most interesting for people who use less than the national average of around 250GB a month. That probably means people who don’t share their mobile broadband connection with too many people: Individuals, couples, business people and students/renters. It will also appeal as an additional connection for an existing family.