HTC One Or Samsung Galaxy – HTC Vs Samsung’s Best

HTC One Or Samsung Galaxy – Summary

Due to be released in February 2013 and delayed 2 months by component shortages, HTC really dropped the ball on the launch of the HTC One. Which is a shame. Because it is a spectacular phone. Some would say it’s the best Android device ever made.

If you’re trying to decide what’s best, the HTC One Or a phone in the Samsung Galaxy  range, here are the key differences you might like to consider. 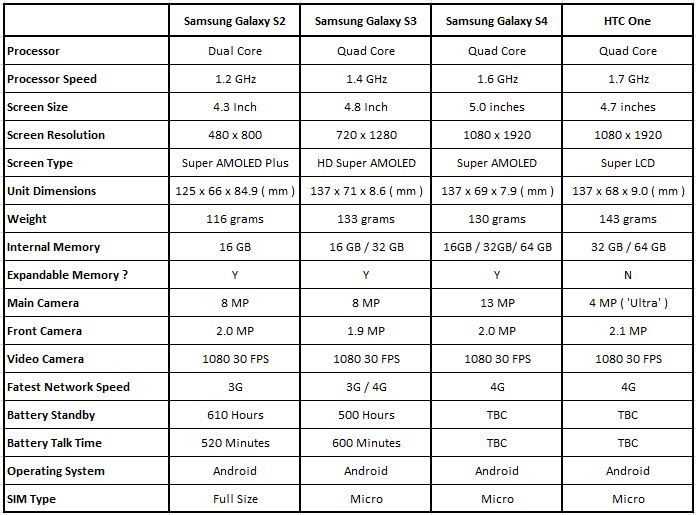 HTC One Or Samsung Galaxy S3

WhatPhone has an in depth review of the HTC One vs Samsung Galaxy S3.

Key differences between the products are :

You can check out the full and detailed comparison of the HTC One Vs Samsung Galaxy S3 here.

HTC One Or Samsung Galaxy S4

WhatPhone has an in depth review of the HTC One vs Samsung Galaxy S4. Key differences between the products are :

The HTC One Unique Software features are covered above in the Samsung Galaxy S3.

The Samsung Galaxy S4 software is even better thought out than the Samsung Galaxy S3’s. Somehow, Samsung have added extra features and made it simpler to use, all at once. The homescreen draws through interesting images from Trip Advisor. Quick Glance uses Infra Red technology to sense when your hand is near and automatically shows you a summary of missed messages by type. The video player software, already best in class has been further refined. Now, when you look away from your phone, the video you’re watching will pause until you look back !

Remember, there is a more in depth analysis of the differences between the HTC One and the Samsung Galaxy S4 in this article.

HTC One Or Samsung Galaxy  – Differences They All Have

The Samsung Galaxy range has a number of consistent elements to it. Many of these features are different to the capabilities of the HTC One. For example :

Expandable Memory :
Every device in the current Australian Samsung Galaxy Range has a slot in to which a Micro SD card can be inserted. Instead of paying for memory installed on the device and being limited by that, with Galaxy Range phones, you can choose the memory that’s right for you. Of course, memory gets cheaper over time which means you’ll get more memory for the same spend if you buy it later in your contract. People who have large music collections, quantities of video to watch or who take a lot of pictures on their device might equally benefit from the capacity expandable memory gives you to swap cards in and out of the device. The HTC One has an enclosed chassis and no expandable memory capabilities.

Swappable Battery :
Every phone in the current Australian Galaxy Range has a removable battery. Since batteries wear out over time, after repeated use ( and phone batteries are in almost constant use ! ) It’s often useful to consider the benefits of being able to swap a battery out. Of course, a removable back cover and interchangeable battery offers the facility to install bigger batteries which last longer or a spare, charged battery to keep up your sleeve for when you need it.

The HTC One’s enclosed body means it’s not possible to swap the battery over without taking it in for ‘repair’.