HFC Vs ADSL Vs NBN Vs Mobile Broadband

Find out which of Australia’s Internet technologies benefit you

Technological advancements have led to the roll out of many new Internet technologies. Many terms and acronyms represent many different available services. This can be confusing when choosing the best technology and mobile plan for yourself.

Here, we break it all down for the consumer by describing the popular options in the Australian market. Take a look at the most popular internet technologies in Australia.

Australians can connect to the NBN (National Broadband Network) in several different ways. The method you’ll use depends on your location, type of property, and a few other factors. HFC (Hybrid Fibre Coaxial) is one of the ways through which you can get connected on the NBN.

HFC network technology uses the infrastructure laid down by Optus and Telstra in the 1990s. These subscriptions aimed for subscription television services such as Foxtel to deliver high-speed broadband Internet nationwide.

You connect to the HFC cable broadband through a connection point similar to that used for Pay TV delivery. From there, the technician connects it to a cable-ready modem or modem-router. With the rollout of the NBN, HFC cables are integrated into the NBN as part of the long-term Multi-Technology Mix strategy.

ADSL (Asymmetric Digital Subscriber Line) broadband is a connection that telecommunication companies provide over home telephone lines. This internet service sends data signals along with the existing copper infrastructures that have been used for telephony services for decades. These copper lines feature more bandwidth than is required for telephone calls. ADSL broadband requires a connection point at a telephone exchange within 5km distance from the exchange.

ADSL broadband in Australia is available as an older ADSL standard (which is rare these days) and the faster ADSL2+ standard. The maximum speed of ADSL is around 7.2Mbps download and 384Kbps upload, while ADSL2+ can deliver download speeds of up to 24Mbps and upload speeds of up to 3Mbps. 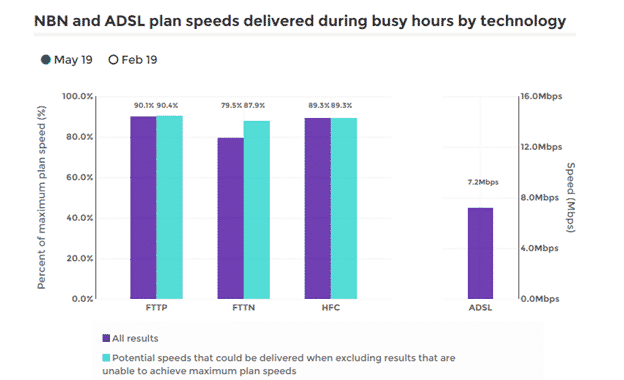 ADSL services are available throughout Australia, as long as you live within the required radius of an exchange. If you’re in an area where fixed-line NBN is installed, ADSL services will no longer be available.

The Australian Government rolled out NBN (National Broadband Network) to provide Australians with high-speed broadband access. They provide wholesale services to phone companies and internet service providers who offer NBN plans for businesses and Australian households. It is an upgrade to the country’s existing phone and internet infrastructure.

The NBN plan is to connect eight million businesses and homes across the country by the end of 2020. One of the goals is to provide people with access to fast and reliable internet services for banking, streaming music and videos, online shopping, and connecting with family and friends.

The NBN technology relies on a range of broadband technologies, such as new fibre-optic cable, fixed wireless, and satellite, as well as existing copper lines to deliver access to fast and reliable internet. Most NBN customers can install their NBN equipment for free from their network operator’s official website. An NBN report shows that 9.5 million Australian businesses and homes connected to the NBN access network this year, an 82 percent increase from the 6.7 million connections of May 2018.

Mobile broadband refers to an internet connection delivered over a mobile network. It is the same networks that smartphones utilize. You can plug these little dongles, also known as a USB modem, into your computer to access the internet instantly.

But today, you can get portable wireless hotspots and fixed home wireless modems with increased data allowances to deliver mobile broadband. With 5G rolling out in Australia, mobile broadband may become the most popular and competitive Internet access method, given its wireless nature and fast speeds.

Telstra’s HFC cable network and NBN are gradually merging to offer up to 100 Mbps download speeds and up to 40 Mbps upload speeds. Meanwhile, most homes in Optus cable areas will be connected to the NBN using fibre to achieve similar speeds to HFC cable.

Australia’s fast mobile broadband may get faster soon as all three top carriers, Telstra, Optus, and Vodafone, are working to improve their networks. Telstra has the fastest Speed Score as a whole, and during both peak and off-peak hours. The telco also ranks eighth in the list of 12 cities analysed by Speedtest.net.