TPG Is Taking the 5G Race to Telstra

While Vodafone and TPG spend a couple of years fighting the ACCC’s opposition to their proposed merger, Telstra and Optus were moving fast with their 5G rollouts. The two latter telcos both launched commercial 5G last year, giving them a significant head start.

However, earlier this year, a federal judge allowed the Vodafone-TPG merger to move forward. In July, the merger became a reality as both telcos became TPG Telecom Limited.

With their resources now put together, as well as the merger fight put to rest, TPG Telecom is now officially in the 5G race. The telco launched its first 5G site earlier in the year, and has some ambitious plans in the next year.

And while Telstra leads the 5G race in Australia so far, TPG Telecom might close the gap pretty soon – if not take the lead outright.

What the Vodafone-TPG merger means

Prior to the merger, Vodafone had hit its spectrum limit, leaving them with no room for growth. Hitting the spectrum limit led to telco losing customers.

TPG, on the other hand, had lots of unused spectrum, a resource that would boost Vodafone significantly. As a result of the merger, the newly formed TPG Telecom now has around 60 percent more spectrum than Vodafone did prior to the merger. 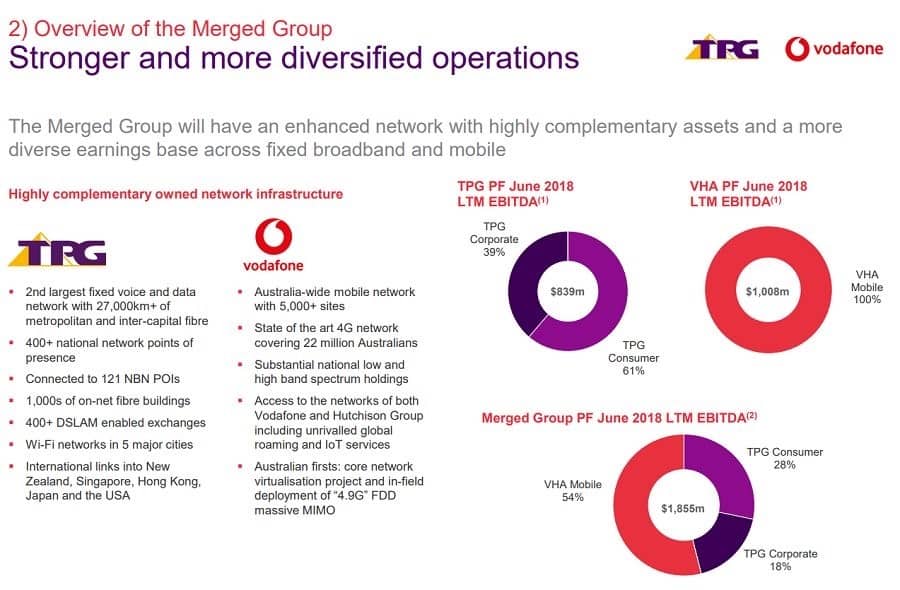 Combining the strengths of TPG and Vodafone could make TPG Telecom a major threat in the telco market. src

Both telcos combined means a more competitive telco market. With TPG’s spectrum and capacity and Vodafone’s reach and customer base in the mobile sector, expect plenty of 4G and 5G growth for TPG Telecom.

TPG Telecom turned on its first 5G site in Parramatta earlier this year. While this sole 5G launch isn’t enough to put TPG Telecom ahead, its ambitious future plans might be.

The newly merged telco recently announced its plans for 5G, over the next year. TPG Telecom expects its 5G network to cover over 85 percent of Australia’s “top six cities, by the end of next year”, says CEO Inaki Berroeta. The telco already has over 1,200 5G sites commissioned and underway.

Assuming this feat can be accomplished, it would place TPG Telecom in a very competitive position in Australia’s 5G market. So far this year, Optus’ 5G rollout has seemed to be at a standstill despite its targets of 1,200 5G sites by March of this year – it is unclear whether that goal was ever reached. But Telstra, on the other hand, is making strides.

Telstra clearly leads the 5G race right now, but next year might see TPG ahead

Telstra 5G is already available in 53 cities and regional towns across Australia, and 210,000 5G service lines are connected to their network. Telstra recently announced that over 250 Victorian suburbs now have at least 50 percent 5G coverage. The giant telco is leading the 5G pack so far, and plans to continue to do so.

Telstra has announced that its 5G coverage will spread across 75 percent of the population by June of next year. While this is a significant target, TPG Telecom’s 85 percent target might put it ahead.

TPG Telecom has entered the 5G race very late, which will make their 85 percent coverage an even bigger deal if they pull it off. Targeting next December makes it a realistic, reachable goal. Perhaps such an announcement might push Telstra to even further, loftier targets for next summer in an effort to maintain their lead in Australia’s 5G race.

Targets are not concrete in the 5G race. This is especially the case where unforeseeable factors like the coronavirus pandemic disrupt the telco environment. Optus is a prime example of what seems to be an elusive target. The telco announced late last year that it was on schedule to have launched 1,200 5G sites by March of this year. However, it is unclear whether that target was ever reached.

That being said, TPG Telecom’s plans to accelerate their 5G rollout is a great deal, but it isn’t definitive that it will go exactly as planned. However, with 1,200 5G sites already commissioned and in progress, TPG Telecom is certainly taking the 5G race to Telstra.