As the economy takes a hit, search for phone plans that save you money

The coronavirus outbreak is changing the way consumers spend their money. As most Australians stay home to slow down the spread of the virus, the economy continues to take significant hits. And a new survey indicates things might not get much better even after the pandemic, as Australians indicate an unwillingness to spend the way they did before the outbreak.

A recent survey by data analytics company IRI Australia suggests that only 15% of Australians plan to spend the way they did prior to the COVID-19 pandemic. And while the coronavirus outbreak is having a global impact on the maority of countries’ economies, Australians seem to have a bleaker view than others. The majority of the 13,000 Australian households surveyed expect a weaker economy for the next 12 months.

Here’s a look at some other key findings from the IRI survey:

With sources of income declining (if not disappearing altogether), consumers have to spend less and pay more attention to value products than brand name products. And as phone plans have become a staple amongst Australians, now is the time to shop for value-driven phone plans from smaller telcos.

During a recession, consumers tend to hold on their money a little longer. As the economy declines, many consumers may have to work for less pay – if they’re able to find work at all. This translates into a reduced willingness to spend, further shrinking the economy.

The COVID-19 pandemic is having that effect on Australia’s economy right now, and most expect it to stay that way for over a year. Most are staying home either willingly or based on some type of governmental directive or guideline. This has affected businesses, causing some to cut down employee hours or lay off workers. This means less money in Australians’ pockets and, again, an unwillingness to spend. 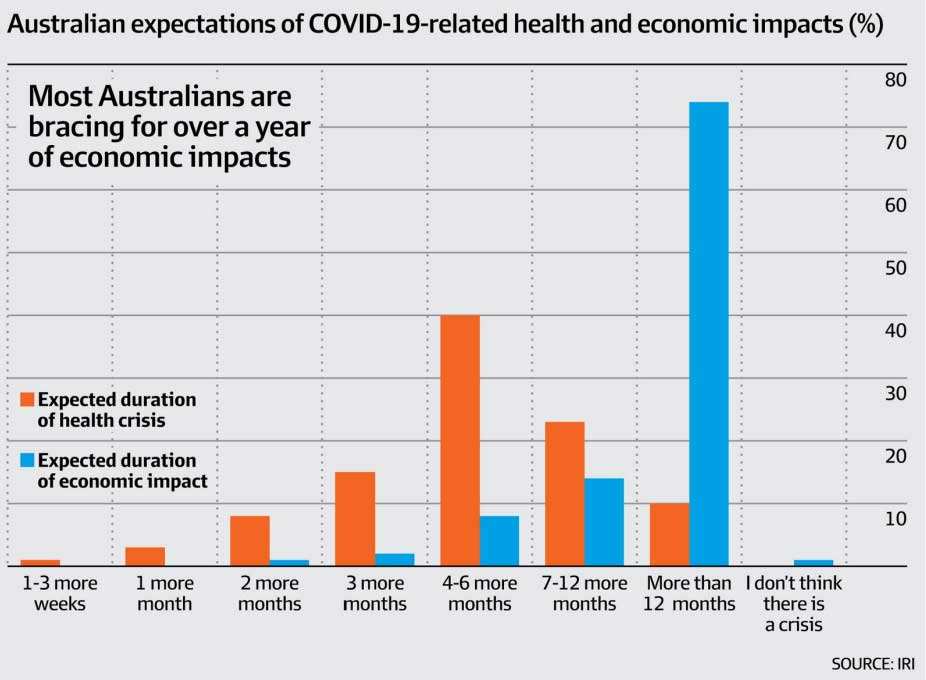 Over 70% of Australians expect COVID-19 impact on the economy to last more than 12 months. src

And as consumer demand reduces, value deals become more attractive – and more available. This is one of the best times to move away from brand name plans and shop for a phone plan from smaller service providers, especially now that you have a lot of time on your hands.

If you’re looking for value in a phone plan, the best place to start is MVNOs (Mobile Virtual Network Operators – the smaller telcos). These telcos resell the major networks (Telstra, Optus, and Vodafone), so they don’t have to worry about infrastructure costs, overhead costs, and wide ranging products lines. As a result, MVNOs can offer some of the best plans to consumers during economic downturns.

MVNOs are becoming increasingly popular amongst Australians, largely due to their value offers. And because there are so many of them in the country, the competition is stiff – leading to even more competitive, value-driven deals.

Here’s a look at some example:

Even if you want entertainment and plenty of data, you’ll find great deals from smaller telcos. With the COVID-19 pandemic expected to have a long, drawn out impact on the Australian economy, it’s best to look for ways to spend less on your phone plan, and the best place to start is MVNOs.

To get you started, we put together a few examples of some of the best MVNOs out there. You can also compare more phone plans here. And if you want a more in-depth look into phone plans and the best offers out there, download The Guide to Australian Phone Plans for free.