The coronavirus has caused major changes around the world, and Australia is no exception. Measures to keep people indoors have been around for months. The economy has taken hit after hit since the mantra of social distancing, and the horror of job losses.

Over 70 percent of Australians expect the coronavirus impact on the economy to last over 12 months, and have decided to spend less as a result. This reasoning is also global – Morgan Stanley economists and Goldman Sachs Group Inc.

With the government measures to keep people indoors, physical businesses have had to either close down temporary or permanently, while others have found innovative ways to carry on business through digital means.

For the latter, they might have found a new way of doing business – a better way, in fact. Going digital means cutting costs – letting go of that bulky brick and mortar retail store and saving money in the process.

Such an arrangement seems most attractive to telcos, and we’ve seen some developments suggesting phone companies might be willing to go full digital even after COVID-19.

The dilemma: For telcos, deciding to close retail stores depends on the target demographic

Only 15 percent of Australians plan to return to how they used to spend before the coronavirus pandemic. For telcos with brick and mortar retail stores, this might mean a decline in foot traffic, and perhaps a sign that retail stores could become a thing of the past.

Retail stores cater to those who prefer in-person interactions. This is typically the older generation, those who don’t spend a lot of time online. So the decision a telco must make in regards to whether retail stores are necessary depends on the demographics they cater to the most.

In other words, while the vast majority of Australians own a smartphone, almost all Australians between 18 and 24 own a smartphone. That age group would certainly be less concerned about retail stores closing down, and more interested in having more online options for purchasing the phone plans.

Looking at these figures, it’s easy to realize where the bulk of mobile consumers come from, but is that enough for telcos to forget about other demographics?

Probably not, because even 84 percent of Australians aged 75 years and older also own a smartphone. That is a huge percentage as well, and in a demographic that would much rather shop at brick and mortar stores. 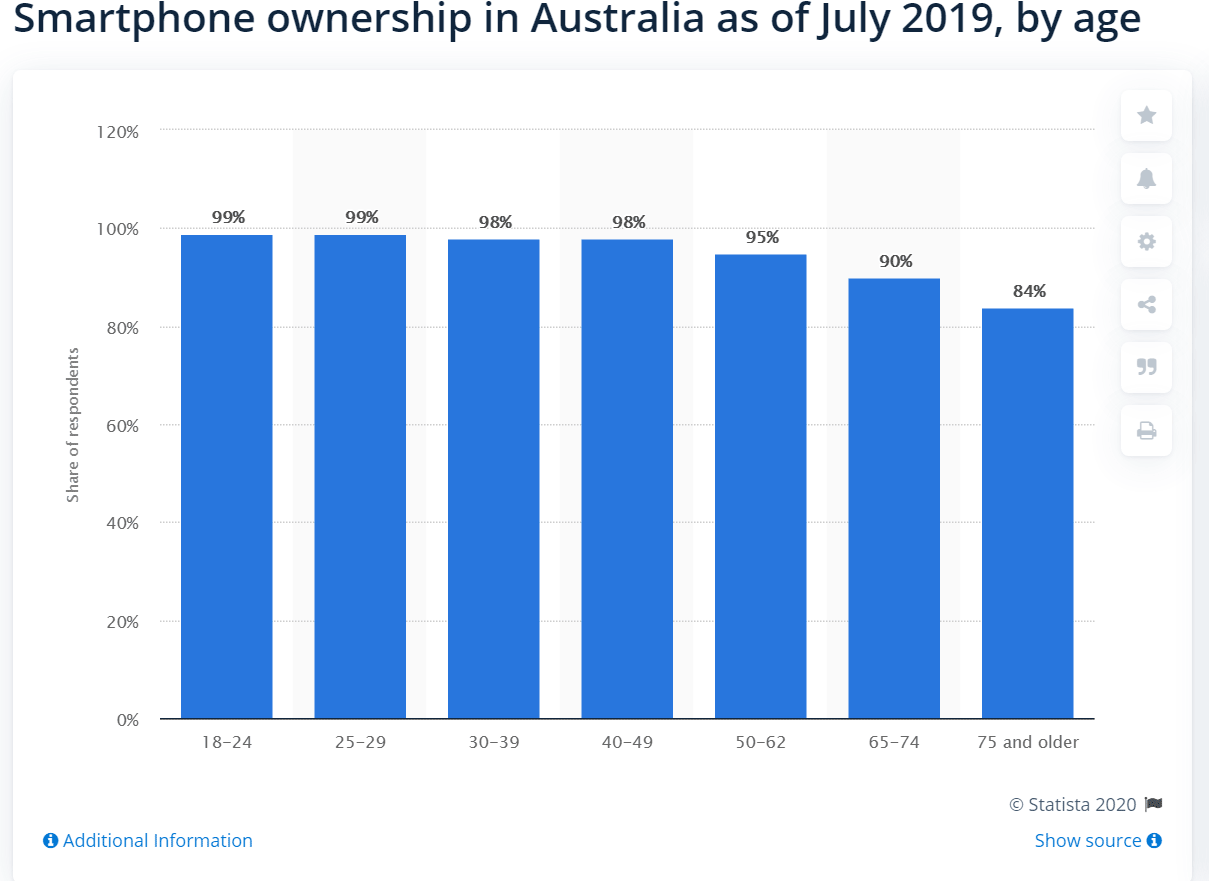 Almost all Australians between 18 and 24 own a smartphone, but the vast majority of the elderly do too. src

Closing call centers might be an easier option, as some telcos are already functioning without them during COVID

Both Telstra and Optus had to find ways to digitalize customer care operations after their call centers in the Philippines were shut down due to that government’s COVID-19 restrictions and measures.

Those closures came at a time when network traffic had spiked 20-60 percent, and customers were experiencing outages from Telstra and Optus due to congestion from increased phone usage as many people stayed at home.

Telstra-owned MVNO, Belong, announced back in June that its customer support team was going full digital, and will remain so even after the coronavirus is no longer an issue.

According to Dion Van de Kamp, Belong’s head of social media and digital content, going full digital had always been the plan all along, but “COVID-19 just sped up the process,”.

This makes one wonder how many other telcos have had the plan to go fully digital all along. In fact, Belong is owned by Telstra, so one can question whether this is a test by Telstra to see how a fully digital telco might fare in the market.

Further, newly-merged Vodafone and TPG (TPG Telecom) recently announced Felix Mobile, a fully digital telco. The mobile service provider will have no stores – all operations will be handled online, via an app.

So far, some phone companies seem to be using COVID-19 as an excuse to close down retail stores. Obviously, foot traffic, the key metric of success for retail stores, is down because of the coronavirus, given the how the number of people in a shop has been limited because of social distancing rules.

But stores have always been a problem for phone companies. They ‘re expensive to run (rent and wages) and they are used for customer service a lot, which phone companies would rather have customers do online or through the call center (it’s cheaper that way).

Overall, Belong’s Dion Van de Kamp is probably right – COVID has probably sped up Australia’s path to digital interactions. Everyone is on Zoom and working from home. Australians are becoming used to this, and phone companies might be wise to take advantage. But with the older generation still holding a chunk of smartphone ownership, whether to go full digital is still a tough question to answer.