Countries Across the Globe Currently Leading the 5G Race

2020 is the official year of global 5G adoption

In its latest report, “The State of 5G Deployments”, VIAVI presents statistics that highlight the exhilarating speed at which 5G networks are expanding across the globe. (link to: https://www.viavisolutions.com/en-us/literature/state-5g-deployments-2020-poster-chart-en.pdf) The report shows that 5G sites are currently hosted in some 34 countries and 378 cities around the world.

So far, Europe, the Middle East and Africa (EMEA) have the largest concentration of 5G sites. But Asia is hot on their trails, falling short by just a handful of cities. The Americas seem to be trailing the rest of the world including the Oceania region.

Here’s a closer look at 5G establishments across specific regions around the world: 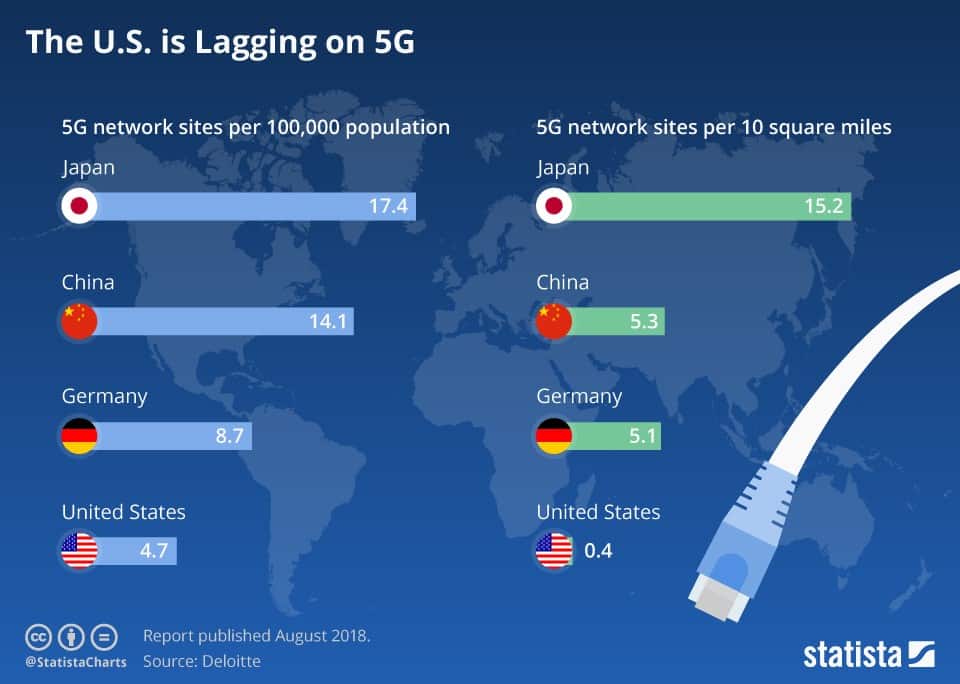 The US and other American countries, combined, were lagging behind most parts of the world in the 5G race as of 2018, but the US itself has since picked up speed. src

Although this region has seen a relatively lower volume of new 5G sites, it’s expected to catch up with the rest of the world in the next few years. The region started out 2020 with speedy developments.

In the U.S, carriers currently running 5G include Verizon, T-Mobile, AT&T, Sprint, C-Spire, Starry, and many others. In Canada, the leading telco Rogers Communications launched its foray into the country’s 5G arena with a $4 billion investment, while others like Telus Mobility have plans in motion to establish their 5G networks in 2020.

2020 is also the year when top telcos in countries like Mexico, Puerto Rico, and Honduras are planning to launch out into the 5G space.

In this region, countries like Chile and Argentina were the first to launch 5G, but they’ll soon be joined by others in 2020. The leading telcos in highly populated countries like Brazil, Colombia, and Paraguay have pledged to have their 5G networks ready for public consumption in 2020. Other places like Aruba will open up 5G networks to their public much later around 2022 – 2023.

A handful of Asian countries have signed on to 5G bandwagon, with South Korea leading the fray in the region. In South Korea, the three leading telco powerhouses SK Telecom, LG Uplus, and KT closed ranks to set up a constellation of 5G sites across highly populated areas of the country. The telcos currently have their sites in places like Seoul and surrounding areas, Incheon, and Gyeonggi.

In Japan, 5G has been in the works in various tech labs around the country since as early as 2010. So far in 2020, industry leaders NTT DOCOMO, KDDI, Rakuten, and Softbank have rolled out their 5G networks across various cities in the country.

Industry leaders in China such as China Mobile, China Telecom, and China Unicom have also rolled out 5G networks across the country, while a few leading telcos in Hong Kong are expected to wire populated areas in the region with 5G connectivity between 2020 and 2021.

Other Asian countries where leading telcos are gearing up for 5G adoption in 2020 include Thailand, Taiwan, Singapore, India, Indonesia, the Philippines, Vietnam, Pakistan, and Cambodia. Others like Bangladesh are renowned for their relatively slower pace of adopting new mobile network generations are not expected to make any significant moves of 5G adoption within the next few years.

Ooredoo, Qatar’s leading telco was the first company in the world to roll out commercial 5G when it launched its 5G network in the country back in 2016. Ooredoo also serves customer bases in many other Middle East countries including Iraq, Palestine, Oman, etc, where 5G is also catching on fast. Other countries in the region currently experiencing speedy 5G developments include Iran, Kuwait, UAE, Saudi Arabia, Turkey, Bahrain, and Kazakhstan,

5G is currently available in top tier cities in many African countries, including South Africa, Morocco, Egypt, and Uganda. Other countries that look poised to adopt the new technology for public use between 2020 -2021 include Nigeria, Senegal, Lesotho, the Democratic Republic of Congo, Tunisia, and Kenya.

Many European countries began testing out 5G networks since 2015, and are poised for a mass-scale rollout of 5G networks in 2020. These include Germany, Norway, the UK, and Switzerland.

Vodafone is one of the major purveyors of 5G in Europe. This year, the telco giant has launched its 5G networks in European countries that are currently a hotbed for the new technology, including Czech Republic, Italy, Spain, and Malta.

Most other European countries also have 5G base stations within sight across their populated cities, from Estonia to Portugal, Belgium, The Netherlands, France, Denmark, Austria, Sweden, Finland, Russia, Luxembourg, Slovakia, Belarus, Romania, Hungary, and Monaco.

Australia and New Zealand were among the first countries to adopt 5G for public use. Australia’s Telstra launched its first commercial 5G sites as far back as 2018, but Optus turned on the first commercial sites in the country in January 2019 – Telstra followed suit. Other telcos soon joined in the following years.

Telcos in New Zealand also began testing their 5G networks as early as 2018, and are expected to open their new network to most of the country in 2020.

5G is here, and many countries around the world can now say the same. While the technology was a talking point just a few years ago, it has now become reality. As infrastructures continue to develop, expect even more of an expansive, global 5G rollout.