Does Google/Facebook/Apple Listen to my Phone Calls?

Privacy is often regarded as a 21st century myth. With the world now more connected than ever, it is easier for larger corporations to mine personal data from their users. While most believe this to be impossible given the numerous privacy terms and conditions they’ve signed in the past, what percentage of consumers genuinely know what those contracts hold? Certain disturbing occurrences across a wide demographic of Australians may lead you to reevaluate what you regard as privacy today.

A good number of Australians have reported some troubling scenarios while using technology, such as advertisements that are relevant to subjects discussed merely minutes ago suddenly popping up. While this is indeed a disturbing occurrence, it isn’t rare — it’s much more common than you think.

In a study conducted by the Unisys Security Index, 41% of respondents received a social media post or advertisement relevant to topics discussed aloud. Aside this bothersome occurrence, 26% of the survey’s respondents reported that smart virtual assistants such as Amazon’s Alexa and Google Home asked questions without prompts. 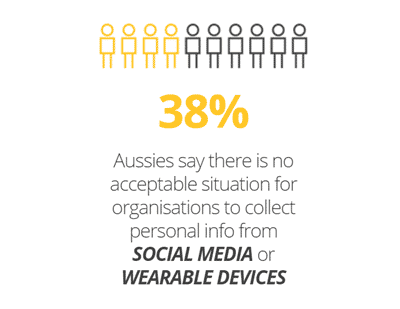 Australians are against their personal information being collected. Source

Ashwin Pal, Unisys Asia Pacific Security Services Director, has reported equally eerie occurrences concerning his smart devices. According to Pal, “Recently I hadn’t turned Siri on and it asked for more information about what I was talking about. That personally freaked me out. Consumers need to be aware about what’s going on, make sure you know what your device is doing and if you aren’t comfortable turn it off.”

Do Google/Facebook/Appler really listen to my phone calls?

There is no straight answer to this question. There is a possibility that neither Google, Apple, nor Facebook are listening in on your phone calls. However, this does not mean they aren’t listening to, or collecting, sensitive information besides phone calls.

In 2019 alone, numerous media giants including Facebook, Amazon, Google and Apple have admitted to listening in on various aspects of their subscribers private speech.

In August, Facebook admitted to using human contractors to transcribe recordings of users without their knowledge. While the company claims this practice has been paused, that is all many believe it to be — a claim. There is evidence that Amazon, Apple and Google have had similar practices in the past.

In April, an article published in the Bloomberg revealed Amazon was using human recordings as a quality control mechanism for its virtual assistant, Alexa. Similar reports were offered when Google attempted to carry out some damage control after a contractor leaked over 1,000 audio clips to Belgian public news channel, VRT. The claim is that 15% of these tapes were made by accident and contained deeply sensitive information. Similarly, the Guardian revealed Apple practiced these unethical mechanisms as a means of improving its virtual assistant, SIRI, and dictation via its devices.

Although Apple insisted its practices were less revealing than those of Google and Amazon, this is up for heavy debate. The two practices are invariably the same and it is a tad whimsical of Apple to think touting their spying as more secure would make it better.

Final words: How can I stop my device from listening in on me?

The thought of large telecommunications and media companies recording your private information leaves many understandably uneasy. There are some steps that can be taken to secure more privacy for yourself in today’s world. Here are some of them:

Privacy is a major concern, as it should be. Today’s interconnected world is driven by data, and acquiring data is becoming easier than ever before. Data is big business, and companies are aware of that. You, the consumer, should be too — being aware will result in diligent efforts to prevent your personal data and information being swindled without your knowledge.