Does your phone need a ‘scrunchable’ battery?

The J.Flex foldable battery can be produced in a variety of shapes and sizes to fit into various devices. src

Who are ‘Scrunchable’ batteries made for?

A handful of tech companies have been chasing down the development of foldable batteries for several years now, and the final products are about to hit the markets. But do you really need a ‘scrunchable’ battery for your Android phone or iPhone? How about for your other wearable devices and IoT home automation tools?

Up until now, we’ve been stuck with lithium-ion batteries to power just about all our gadgets. The rigid, rectilinear form factor and heftiness of lithium batteries have held us back from making bold strides in various flexible technologies. Even many foldable phones have not been as flexible as many would have wished for because of their inflexible, bulky batteries. Thankfully, there have been some major breakthroughs in foldable battery technology.

Professor Markus Niederberger and his team of researchers at the Department of Materials at the Swiss Federal Institute of Technology in Zurich have developed a mold-breaking prototype of a thin-filmed, foldable battery that retains its shape after sustaining vigorous stretches, folds, and twists.

A similarly robust flexible battery, J.Flex, has been developed by Jenax, a tech company based in South Korea. According to EJ Shin, head of strategic planning at Jenax, the company is “putting batteries into locations where they couldn’t be before.”

The anatomy of ‘Scrunchable’ batteries 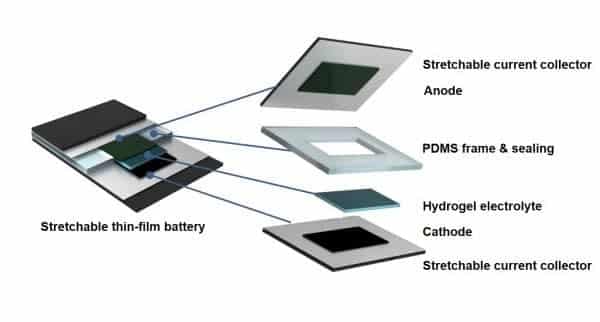 The components of a flexible battery. src

Flexible batteries are composed of thin layers of foldable materials that act as various battery components such as membrane separators, cathodes, anodes, and electrolytes. So far, most companies have fallen short of suitable flexible materials for many battery components. But in teasing their new product, Niederberger stated that “nobody else has used exclusively flexible components as rigorously as we have to produce a lithium-ion battery.”  Shin also echoed a similar sentiment, fully confident of their product’s market readiness.

The mold-breaking prototypes use highly-conductive, carbon-based, stretchable plastic for the anode and cathode. In J.Flex, the electrical-conductivity of the plastics is reinforced with a thin layer of tiny silver flakes embedded in a fashion that keeps them in lockstep constantly, even when twisted and folded. Both electrically conductive materials complement each other as the battery is held in various positions. J.Flex also uses graphite and lithium cobalt, another two excellent conductive, srunchable materials.

As easy as that sounds, Shin states that the dexterous composite of flexible materials is “a combination of materials, polymer electrolyte, and the know-how developed over the years.”

J.Flex is highly versatile, thanks to its form factor which makes it a good fit for a wide range of devices, from phones to IoT devices and sensors. The battery’s thickness barely surpasses 0.5 millimeters, and it can be miniaturized to a 20 by 20 millimeters (mm) form or enlarged up to 200 by 200 mm. That implies that we’ll most probably find sizes of the battery suitable for just about any Android phone or iPhone.

The size also determines the battery’s capacity, which varies between 10 milliampere-hours and 5 ampere-hours. At this rate, Shin says a single charge can power a sensor for a month, but the charge lasts shorter the heavier the usage.

In the Niederberger’s prototype, an eco-friendly, water-based electrolyte gel is sandwiched between the two electrodes, making the battery environmentally friendlier than traditional batteries. “Electrolyte solutions in present-day batteries are toxic and flammable,” says the researcher

Final words – The challenges ahead

Niederberger believes the technology is still premature for the markets and more research is needed. Jenax has so far filed over 1,000 patents related to their technology, but they’re not in a rush to push their product to the markets.

One area of improvement everyone is working on is the charge capacity, which needs to be increased to power more devices efficiently. That way, they can complement the mobile experience of flexible phone users reveling in the best mobile plans. And in doing so, the manufacturers must also ensure that they don’t undermine any other aspect of the battery, including its safety.

The batteries need to be well-secured from electrolyte leakages from the twisting and folding motions which can cause an explosion. To address this, Jenax recently created a proprietary semi-solid gel polymer electrolyte. “We went to one of the biggest causes of battery explosions and made it non-flammable,” says Shin. Jenax is now poised to launch the production line for the battery before the end of the year, possibly ushering in a transition from the era of lithium-ion battery domination.