How 5G and AI Tie Together

5G and AI benefit each other

5G isn’t alone – the technology comes with high expectations because of the many other technologies we hope it will advance. You’ve heard about driverless cars, the Internet of Things (IoT), surgical robots and more. To operate flawlessly and reach or exceed our expectations and their potentials, these innovations need a wireless network that’s better than current LTE solutions, and 5G is expected to be just that. 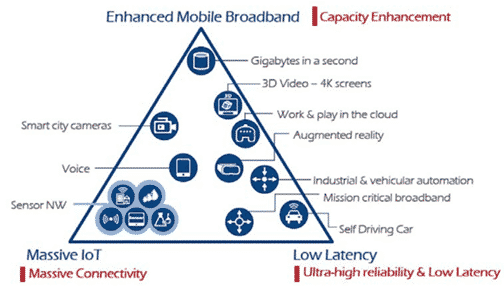 5G improvements in speed, bandwidth, and low latency, and some applications that benefit. img source

While 5G may boost innovation, Artificial Intelligence (AI) also plays a role in making 5G live up to expectations. A lot of the technologies 5G is expected to boost have some AI integration somewhere, and even the deployment of 5G itself could benefit significantly from AI applications.

That being said, AI itself will also benefit from 5G. Artificial Intelligence is all about algorithms that become more and more intelligent over time, for the precise reason of performing tasks seamlessly – tasks that, without AI, would be left to a human tapping buttons repeatedly or, even worse, making exhaustive uses of a pen and paper.

In this article, we’ll take a look at two areas where 5G and AI will help each other live up to expectations in this fourth industrial revolution. Read on to explore.

Gone are the days when phones were purchased for calls and texts. Today, smartphones are increasingly judged by the quality and quantity of cameras on the device. But these cameras could eventually become more than selfie gadgets.

Smartphone cameras will become major players in the IoT environment. The IoT initially depended on sensors to communicate between devices. For instance, parking sensors, motion sensors, and heart rate sensors. Smartphone cameras today can take over those sensor responsibilities with the aid of AI.

Here are some examples: Telstra recently used AI cameras to track water flows in a river by measuring its height. They also setup a Raspberry Pi to determine whether a desk was occupied or not.

But getting the best out of an AI powered camera requires fast data transfer speeds and low latency for seamless response time. That’s where 5G comes in. While you can expect to see the IoT sector increasingly shift to AI-powered cameras as sensors, expect that shift to be dependent on the 5G rollout.

5G has been an expensive feat for telcos so far, and the price tag will continue to increase. Telstra and Optus have targeted this year for a significant rollout throughout Australia that began last year, and they’ve spent massive amounts of dollars already.

But Optus just successfully tested a 5G video call on a spectrum shared with 4G streaming video. The concept behind this is referred to as Dynamic Spectrum Sharing (DSS), and it’s going to be a boon for telcos looking to save a ton of money on the 5G rollout.

Spectrum is limited, and with the increase in network use that’s expected as 5G emerges means an increase in spectrum demand. Telcos have to figure a way to make use of allocated spectrum as 5G is rolled out.

DSS allows both 5G and 4G to share spectrum without having to split the spectrum. Imagine a telco with 20MHz allocating 10MNz to 4G and the other 10MHz to 5G. Such a scenario might create a waste because 5G isn’t fully rolled out and so there might be a lot of unused spectrum left in the 5G part, while the 4G part might be overcrowded.

But then again, who knows? Maybe the 5G spectrum allocation is just right, or maybe it’s too little. So how do telcos know what exactly to allocate without having to manually increase and decrease? DSS takes that question out of the equation with the help of AI, and intelligent algorithms assign spectrum seamlessly.

Here, Optus 5G video call demonstration while streaming video on 4G has significant implications. Being able to share spectrum seamlessly means 5G can be rolled out on current 4G spectrum, significantly reducing costs associated with buying or allocating spectrum to 5G. This AI-driven DSS solution means a faster 5G rollout that might require the need of software upgrades alone.

AI is just as significant a development in the technology world as 5G, if not more. While 5G is expected to boost innovation in several industries, most of those innovations are powered by AI. Artificial intelligence is limitless in its applications. Any innovation that solves a problem can do so easier with intelligent algorithms that reduce the need for manual, human labour – that’s what AI does. With AI and 5G having a hand-in-hand approach, expect the next decade to bring about some dynamic advancements in virtually all industries.