5G transition will be more dramatic than previous generations’

5G is poised to redefine the way we interact with the world around us. With the potential benefits of the technology far outweighing its drawbacks, it’s no wonder governments, tech companies, and stakeholders across industries are clamoring to join the 5G bandwagon. A fully functional 5G network can empower applications and innovations that will significantly fast-track economic growth and technological advancements.

However, 5G transition will be a lengthy and arduous process that will require billions of dollars of capital investments for several years to come. So is it worth dumping 3G and 4G for 5G plans at the moment? To help you decide, here’s a comparison between 5G and the older network generations.

The key differences between 5G and previous generations 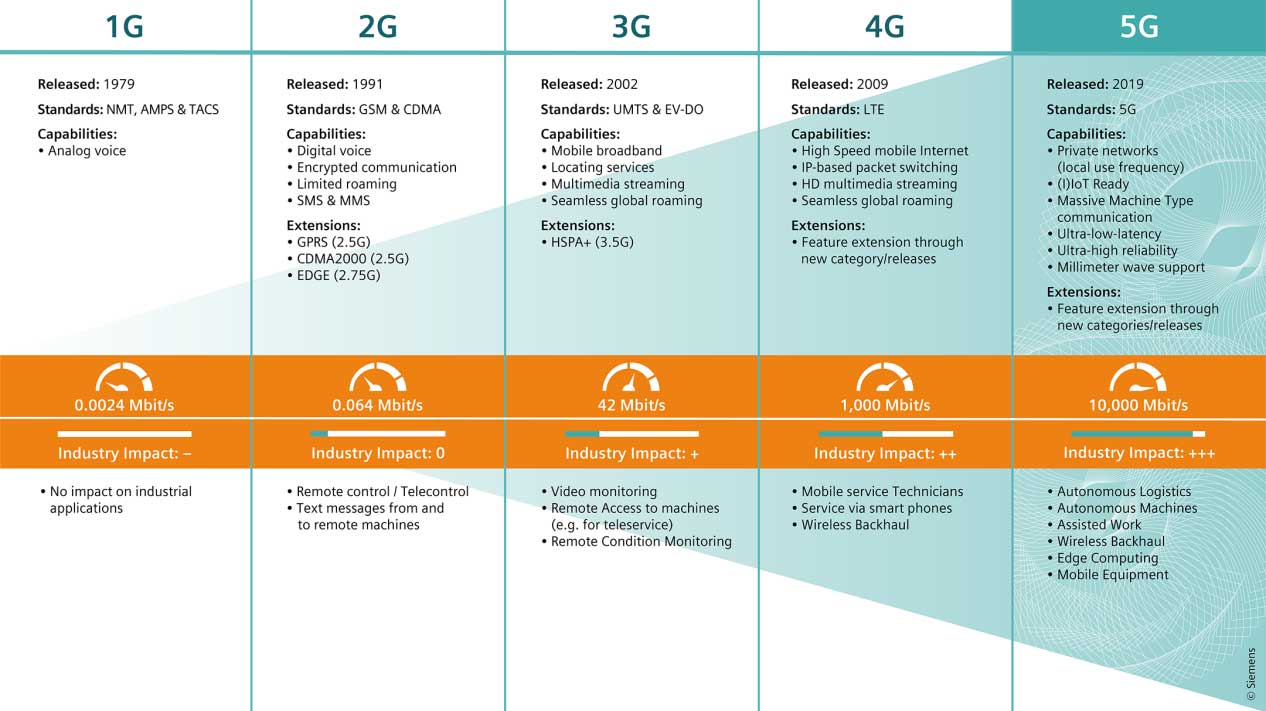 5G vs the previous generations. src

Here’s a comparison of 5G against previous wireless network generations, based on speed, bandwidth, and latency.

Network speed is one of the areas where the difference between 5G and previous generations is the most dramatic. The stark difference in speeds results from the use of a whole new range of frequencies like mmWave and high-band spectrum in 5G. The super-high-speed airwave allows devices to transmit much larger volumes of data at faster rates on 5G networks. With 5G speeds superseding 4G by up to 100 times, you can download files that would take 10 – 20 minutes on 4G within just a few seconds on 5G.

But it’s not only movie buffs and heavy internet users who’ll appreciate the incredible difference between 5G speeds and those of previous network generations. A wide range of high-tech applications will emerge in various industries from manufacturing to healthcare and automobiles, thanks to the phenomenal data speeds of 5G. For instance, connected components of building IoT systems can rapidly exchange streams of data between themselves to adjust to environmental changes to maintain optimal environmental conditions at all times.

One of the main reasons why 5G transition has trundled on despite concerns about the health risks and immaturity of the technology is that we’re fast running out of capacity on the previous generations. The capacities of 4G and 3G technologies have been overstretched in major cities across the globe. In some places with congested networks, data speeds have plummeted to the extent that people wonder if what they’re using is actually 4G and not 2G or 3G.

Enter 5G, and we can now expect almost everything around us to be connected to the internet. With its bigger traffic capacity, 5G will fuel the unprecedented proliferation of connected devices. 5G utilizes a disproportionately wider range of spectrum. To put things in perspective, 5G is like an expansion of a road from two lanes to a freeway with multiple lanes. With a significantly larger bandwidth, 5G’s network capacity is over 100 times that of previous generations.

Besides its remarkably faster speeds and wider capacity, 5G also outstrips the previous generations in terms of latency. Latency refers to the time it takes to send data from one device to another. Together with data speed, which refers to the amount of data that can be transmitted through a network within a specific period (measured in bits per second), latency determines the speed at which we download and upload data on a network.

Latency is measured in milliseconds, but it can culminate in a lengthy period with the transmission of huge volumes of data.

At best, existing network generations can work with a latency of about 50ms. With 5G, latency is nearly inexistent. 5G can operate with latency as low as 1ms – 50 times lower than that of the previous generations.

To put things in context, the brain processes signals sent from the eyes within about 10ms. With information exchanged between devices at a fraction of that time, our real-time experience with various 5G-powered applications will be enhanced magnificently.

Experts believe we’re still a long way from 5G completely replacing previous network generations. That means for years to come, our mobile connectivity will likely be a hybrid of 5G and previous generations. As the new technology is rolled out gradually, we’ll have to fall back to previous generations from time-to-time. But with a clear understanding of how differently each network works, we’re less likely to be befuddled when we find ourselves switching from 5G to 4G or 3G.