How Does the Internet of Things Work?

You’ve probably heard about the Internet of Things, commonly referred to as the IoT. But chances are you might not really know how it works. If that’s the case, you’re not alone – many don’t even know exactly what it is, talk less about how it works, given its complexities and how wide ranging its applications are.

To simplify things, the IoT consists of interconnected devices that communicate over the internet. One device might control others, or communicate information about its surroundings to an interface that can control it, or make decisions on its own based on predefined settings.

Think about smart home appliances as an example. You may purchase a thermostat that has an app that’s downloaded to your smartphone. You can regulate the temperature via that app on your smartphone, or enter settings for it to regulate itself by. Or how about a smartwatch for your child? It likely comes with a tracking functionality that alerts you via an app on your phone when your child goes outside a designated area, and such IoT devices already have data plans to help them stay connected.

IoT applications get even more complex than that, to larger scale environments like smart cities, and industries such as agriculture and healthcare. But the concept is the same – devices communicating data collected with sensors of some sort, (link to, ) and doing so over the internet.

Step-by-step look at how the IoT works 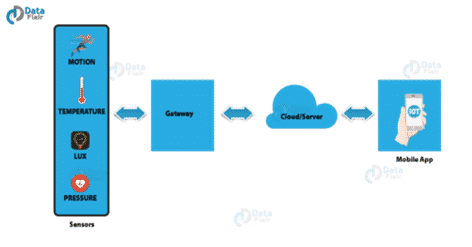 The IoT in a nutshell. Image Source

Think about the IoT as a system consisting of sensors that collect data which are transferred via an internet connection to an interface that can command an outcome. Hopefully, that wasn’t too complex an explanation, but in case it is, here’s a step-by-step look.

The Internet of Things have wide ranging applications

The IoT doesn’t end with consumer devices like smartwatches or smart thermostats or your Amazon Echo. It goes well beyond that. The described steps of how the IoT works were intentionally simple. In reality, however, it applies to more complex industries and structures, but the steps, at the core, remain the same. Overall, the purpose boils down to improving efficiency and quality of life.

In a smart city, those garbage cans would be equipped with sensors that detect the level of garbage within. They would communicate that info to the clouds via the internet. That info would then be processed and sent to a user interface in the city. The garbage can that isn’t anywhere close to being full won’t alert the user that it needs emptying – instead, it might give an approximate date of when that would be necessary, based on the rate it has been filling up. The other garbage can will report that it should be emptied and it really won’t wait until it’s overflowing before doing so, because it has been communicating its garbage level throughout. This way, the garbage disposal worker will attend to only the garbage cans that need to be emptied, going directly to them based on the communicated information, saving both time and resources.

IoT systems are already becoming very popular. You’ve used some, perhaps, on a smaller scale, but will eventually experience it on a larger scale. With 5G networks emerging, the environment is becoming more conducive for the IoT because it functions better in a wireless environment. Because 5G promises high speeds and bandwidth, as well as low latency, the entire data transfer process will become extremely smooth.