As 5G progress is being made in Australia, iPhone users are eager to join

5G has been the talk of the technology world for the past couple of years. Last year, the wait was over in Australia – both Telstra and Optus launched their 5G networks in select cities throughout the country. Earlier this year, Vodafone followed suit with a 5G launch in Parramatta.

We also saw Android smartphone manufacturers get into the 5G conversation last year. The most popular was the Samsung Galaxy S10 5G, and the telco has even followed up with another 5G phone this year – the Samsung Galaxy S20 series that’s available from a number of telcos.

But with all three major Australian telcos now offering 5G plans and devices to some extent, there’s been a glaring hole in the conversation – Apple iPhones. So far, iPhone users have a lot of questions about their device’s 5G compatibility, if any, and we’ll answer them all in this article.

While 5G is already live in select cities throughout Australia, iPhone users are left without any 5G-compatible devices. Apple released the iPhone 11 last year, but that device didn’t have any 5G capabilities.

But this year, Apple is expected to step into the 5G handset market with the iPhone 12 series. The only concern is whether or not the ongoing COVID-19 pandemic might delay the release of any 5G iPhone, considering how the outbreak has disrupted virtually every industry around the world. However, despite such concerns, Apple seems bent on a 5G device being released toward the end of this year.

Apple has good reason to want to launch an iPhone with 5G compatibility this year, regardless of any disruptions the coronavirus outbreak has caused. That’s because 5G is becoming more and more available throughout the globe, already in 34 countries.

Here’s a look at the top 10 countries with the most 5G cities so far, according to VIAVI Solutions: 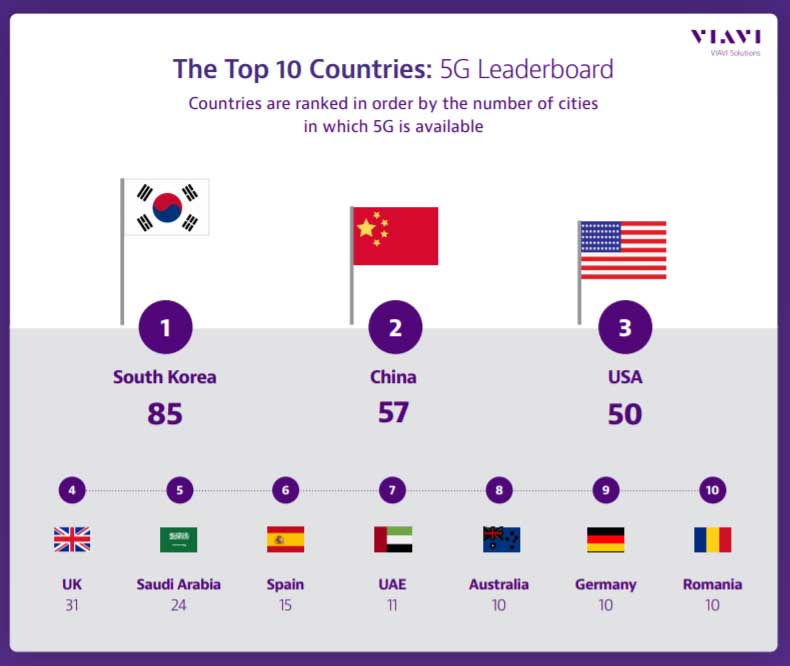 Top 10 countries with the most 5G connected cities, according to VIAVI. img src

With Australia having the eight highest number of major cities with 5G availability in the world, the country’s rollout is well on schedule. And because nearly half of all smartphones used in Australia are iPhones, you can imagine how eager Australian iPhone fans are to welcome a 5G-capable device.

This is all because of the benefits of using a 5G network:

These benefits lead to an overall improved data experience on a smartphone, from streaming to gaming, video conferencing, and beyond.

And with 5G plans already out from the major telcos, as well as a number of Android phones that are 5G-capable already in stores (and more coming) this year, Apple’s 5G iPhone is much anticipated.

Here’s a summary of the 5G plans from Telstra, Optus, and Vodafone:

Expect a 5G-capable iPhone device towards the end of the year, as early as September. With other major manufacturers already having 5G smartphones on the market, Apple would be wise to release it’s 5G smartphone sooner rather than later, regardless of any coronavirus disruptions. And with Australia ranked 8th in the world as far as the number of cities with 5G availability, iPhone users in the country are eager for a device that can take advantage of the benefits the fifth generation mobile network technology has to offer.