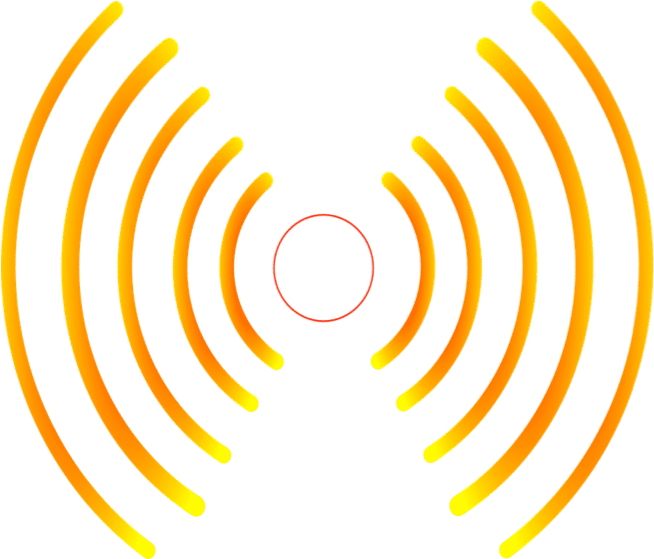 Wi-Fi calling is already available in Australia with some phone companies.

Optus have now launched their WiFi Calling app. We’ve updated the article below with some comments and screenshots to show you how it works.

What is WiFi Calling ?

WiFi Calling has become a hot topic on the Australian mobile phone scene. Hopes of major improvements in mobile phone reception and call quality followed in the wake of a number announcements in the industry and launches of similar services overseas.

As its name suggests, WiFi Calling describes voice and data transmission, from a mobile phone, over a WiFi or wireless network. Most people have a home broadband connection these days and most of them have a WiFi router attached. WiFi is what you use to connect to the internet from your laptop when you’re doing email in your bedroom. Now, using WiFi calling, you can use the same home wireless network to make phone calls from your mobile. If your mobile device incorporates a WiFi Calling adapter you can connect it to the wireless network via a WiFi hotspot. WiFi calling allows you to make calls and enjoy high-speed Internet over your existing WiFi frequency.

WiFi connectivity is widely used in other communications media. For example, Skype and Viber may already be familiar brands and apps to you. Both use WiFi networks to connect users’ voice calls. Increasingly, people are finding this sort of app convenient for their business and social messaging needs.

The implementation of WiFi calling smartphones delivers comparable benefits. The difference is how easy it is to make the call. WiFi calling apps provided by your phone company have a significant benefit. They integrate with your existing phone book.

Who can use WiFi Calling?

If you want to use WiFi calling in Australia, you will need to have a smartphone with a WiFi Calling capability installed by the manufacturer. At this stage, in Australia it is not an app you can buy and download on the internet.

The range of compatible devices starts at the top end of town. But it is steadily expanding. For example, Apple’s iOS devices ( iPhones 5s, 5c, 6 and 6 Plus ), and newer android devices Samsung Galaxy 55 and 56, are all built with the necessary gubbins which allows them to work with WiFi Calling.

You might need your phone company to update the phone firmware before the feature activates. Once you’ve done that, WiFi calling is as simple to turn on and off as Bluetooth..

Cellular network coverage in Australia covers most people. However, everyone has experience of situations where their calls have dropped out, or the network they use doesn’t provide a signal in one room of their house. Most users believe there is abundant room for improvement – whichever phone company they use.

The Australian government shares this opinion. In a recent proposal to investigate “mobile black spots” they state ;

Inadequate mobile phone coverage is a significant issue for many Australians, particularly those living, working and travelling in regional Australia.

Industry analysts believe that the introduction of Wi-Fi calling is essential to plug some of these mobile service gaps.

The Verdict on WiFi calling

Most people feel they pay too much for their mobile phone access. Given that, it’s incredibly frustrating to find yourself in a situation where you can’t make a call or get access to the internet from your phone. Everyone has a friend who needs to stand at the bottom of their garden to get a signal, even in some of Australia’s largest cities.

The phone companies have spent billions of dollars of their own money trying to improve Australian coverage outside and inside buildings. Things have gotten better, notably for Vodafone, in the last three or four years, when it comes to phone company coverage. However, the exponential increase in the growth of data threatens to overload the networks again unless they get their capacity planning right.

WiFi calling represents one of two parallel ideas which will help users and alleviate some of their pain. First, using your own WiFi network in your own home doesn’t cost the phone company anything and lets you browse and make calls as much as you need to where previously there was no signal. Second, the metamorphosis of phone booths ( by Telstra ) and bus stations ( by Vodafone ) in to free WiFi zones will help take the weight off the cellular network to transport all that data we’re using.

Unusually, both initiatives are free to users, easy to use and significantly improve the experience they get. What’s not to like about WiFi calling on your phone ?

How Much is WiFi Calling Going to Cost Subscribers?

In the UK the EE phone companies applies the same rate as regular mobile calls and deduct the time from the subscriber’s allowance. US phone companies are more generous with free WiFi Calling services included in service bundles. It remains to be seen which of these paths Australian phone companies will follow.

While there are real expectations that Australian mobile devices users will benefit significantly from the introduction of WiFi Calling, it is unrealistic to expect this is going to guarantee your mobile connections wherever you are located. Important points to keep in mind:

Australians are impatient for the phone companies to offer WiFi Calling but there are still no definite dates. Besides the desire to enjoy its benefits there is also the issue of national pride. Australian telecom is one of the most advanced in the world but in this area they have fell behind other western countries. In the US WiFi Calling is widely available. In the UK the EE phone company introduced WiFi Calling in April 2015, and Vodafone should soon follow suit.

Spokespeople for Optus and Vodafone tell the media they have plans to introduce WiFi Calling before very long, although the exact dates have not been announced.

UPDATED : We said Optus looked most likely to be the first at the finishing post – and launch WiFi calling in Australia.

It’s as easy to install as downloading an app from the iTunes or Google Play store. Integration with my address book in Android was easy and I was making wifi calls in no time. As a user, you don’t want to have to worry about the technical ins and outs of how it works and I was impressed. I didn’t have to. There were a lot of caveats to consider, as you can see from the screenshots below. However, for those who suffer from poor coverage in at least one room of their house, Optus’ first to market solution is a nice free fix. 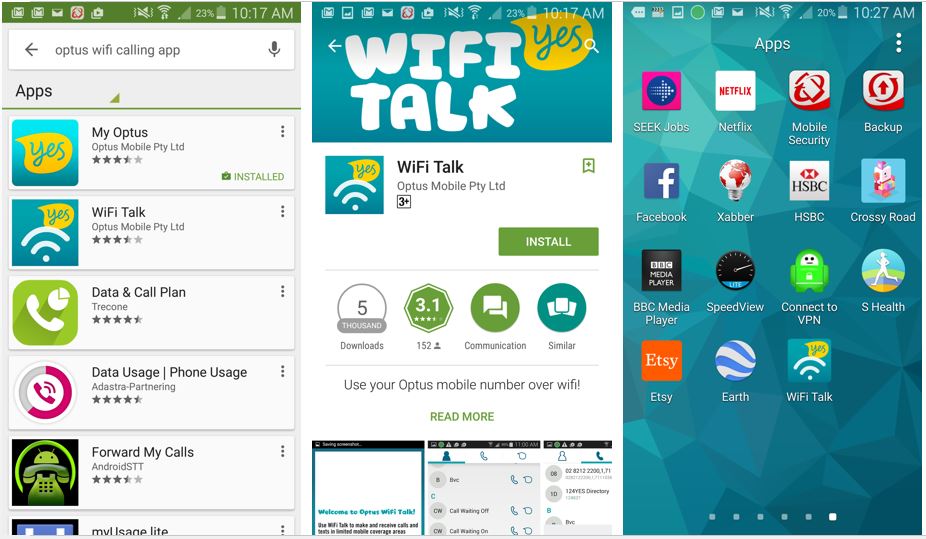 Optus has already launched their own WiFi calling app 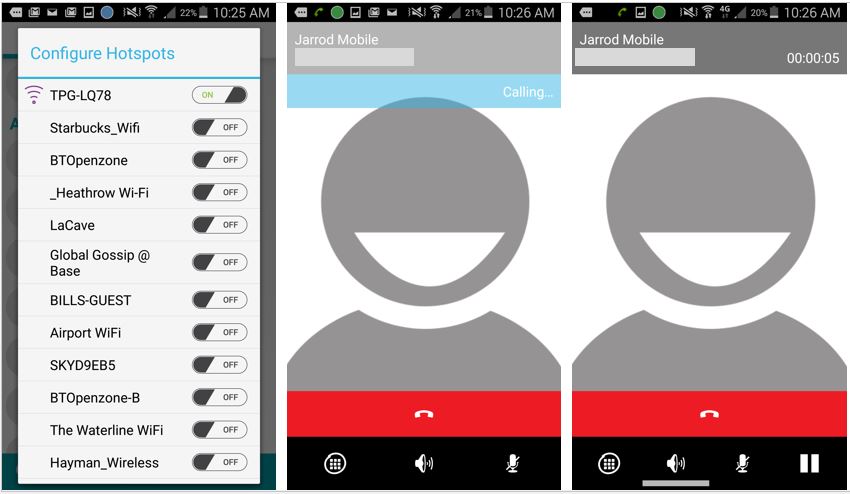 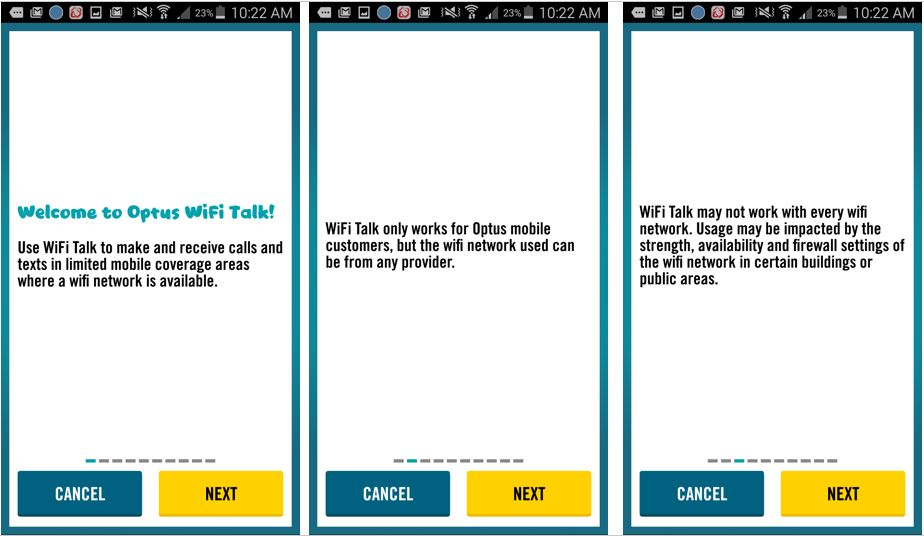 These are the steps you need to follow, to install the Optus WiFi Calling App