A used phone as an inclusion on a phone plan – can it really work?

Macquarie’s Nu Mobile scheme is now a bit clearer. Back in April, the new MVNO announced its intentions to launch, laying out its plan to provide customers with used smartphones alongside postpaid contract plans.

Following their announcement, major telcos Telstra and Vodafone showed interest in similar schemes. This, of course, would place Nu Mobile in a very competitive space as the new company staves off both MNOs (Mobile Network Operators) and MVNOs (Mobile Virtual Network Operators). In fact, the very idea of its strategy – an MVNO financing used phones on postpaid plans – places the company in a gray area that seems too competitive and confusing to begin with.

This all seemed a bit odd at the time, and actually still does. But with new details on what exactly we should expect, things are a bit clearer than they were a couple of months ago. The idea in a nutshell still remains the same, but the latest details fill in some blanks.

Perhaps the most curious part of the Nu Mobile scheme has always been the used handset idea. We certainly understand Macquarie’s thinking in that regard – they’re literally sitting on over a million old phones that have been returned after being leased out by telcos, so it makes sense for them to figure out what to do with those phones.

But we’re not so sure Australians will buy the idea. After all, according to our poll, Aussies just aren’t into used devices. 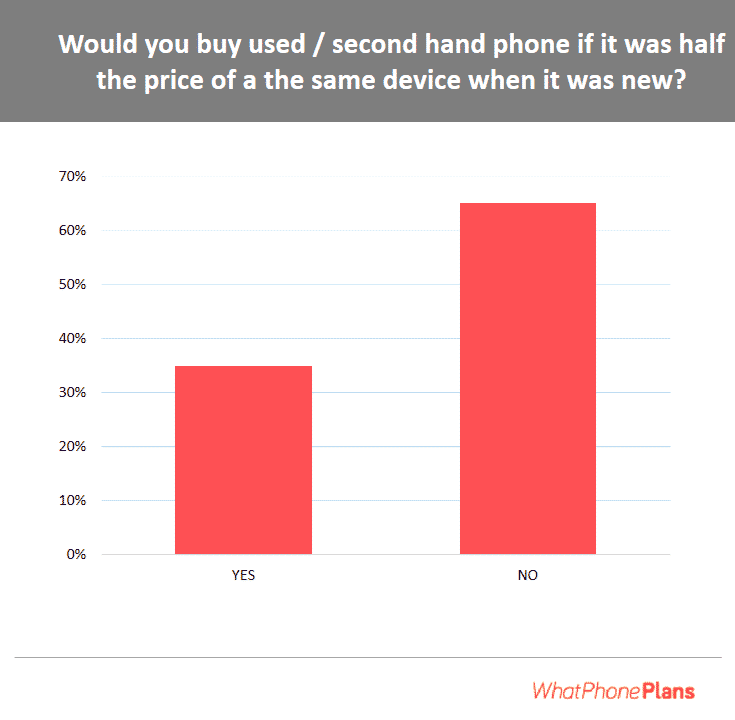 Over 65 percent of Australians would avoid used phones even if they cost half the price of what they were when new. Source.

In addition, Nu Mobile isn’t just selling used devices; they’re tying month-to-month plans with them by force – literally. We think this complicates things even more. The sales pitch is a bit too loaded, especially at a time when telcos are in a hurry to simplify things by separating their phone plan sales from the sale of devices. Nu Mobile seems to be going against the grain here by ignoring this trend.

Now that we have more details on what Nu Mobile is actually offering though, perhaps we can take a deeper look into whether this might work. Here’s what we now know.

While this seems quite fair for a used phone purchase, our concerns still remain. Yes, a 12-month warranty and the opportunity to return or exchange your handset whenever you please are great comforters ( although we have no idea what constitutes a “fault of your own” and Nu Mobile does not explain ). But the fact remains that Australians still aren’t fans of used devices. Tying that used device to a contract plan makes it even less attractive.

Nu Mobile’s plans are actually very competitive. Their data inclusions are good, and so are their prices. The data bank feature is also a great response to Australians’ demands for fairness. The “One-off Bonus” data is also a nice touch for the same reason, as it allows customers to store that data and/or use it at any point throughout the life of their plan.

But the fact remains that these “month-to-month” plans are tied to second-hand devices, which you might opt to pay off over a 24-month period, meaning they can essentially become 24-month phone plans rather than month-to-month. This mandatory hand-in-hand used phone + plan tie-in is where things get a bit muddy.

As stated, Nu Mobile actually have some fair terms for their second-hand devices as far as the warranty and exchange/return policy are concerned, which is a good thing. The company also has some value-driven plans that use parts of the Telstra 3G and 4G networks, which is also a good thing.

But when you tie these good things together so that one can’t exist without the other, they become not so good. This hand-in-hand scheme takes away a significant amount of flexibility and adds unnecessary complications. Customers crave flexibility, and telcos are running away from complications. Nu Mobile’s strategy seems to ignore both of these facts.

MVNOs are increasing in popularity, thanks to their simplicity. Australians flock towards their SIM-only plans because they prefer the independence of prepaid plans and bringing their own phones – the flexibility and ability to choose what they want. Nu Mobile, an MVNO itself, is moving in the opposite direction. 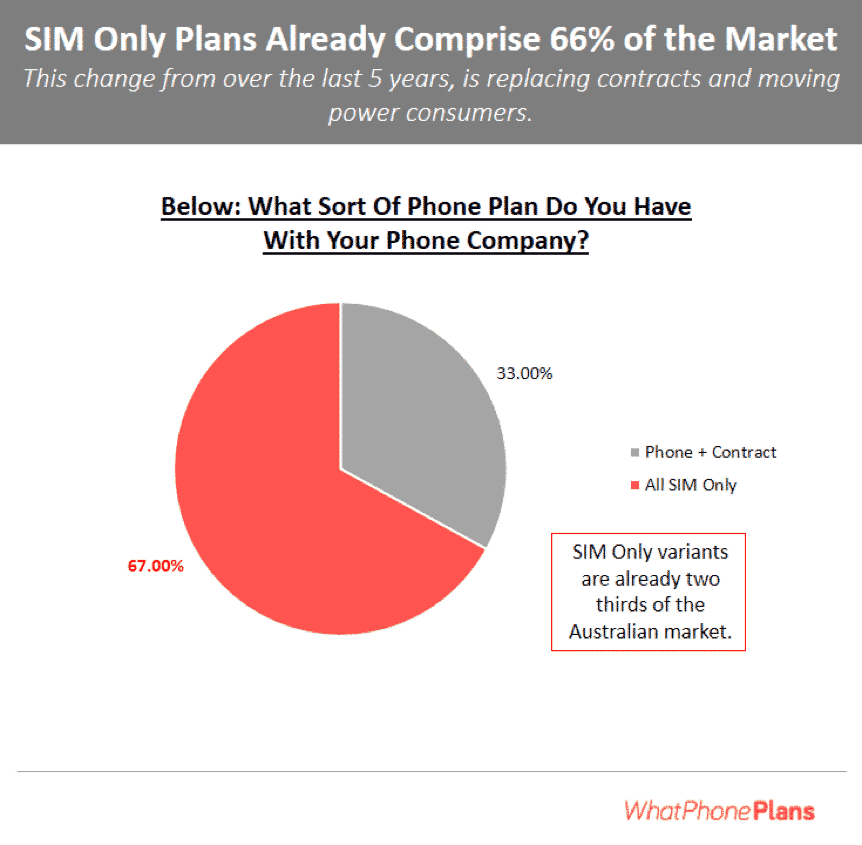 Two-thirds of Australians prefer SIM Only plans to being tied down with contract plans that come with phones. Source.

We’ve seen major telcos revamp entire strategies just to get in line with this trend. For example, Telstra recently made some moves that were consistent with its T22 goals of simplicity and flexibility. The giant telco revamped its postpaid month-to-month plans to allow customers add their own phones to their plans, along with other flexibility-driven ideas.

The point here is that Nu Mobile is significantly limiting customer choice. Not only do you have to purchase their handsets to take advantage of their plans, but they’ll also only sell you second-hand phones. You have no option for a brand new handset, you can’t bring your own phone, and you can’t purchase a phone from somewhere else. It’s hard to imagine this being a hit.

In a previous article, we cited some possible reasons why Australians aren’t big fans of purchasing used handsets. One of the possible reasons has to do with the uncertainty of just how long the device will last. Nu Mobile attempts to address that concern with its 12-month warranty and exchange/return policy. We commend these policies, but they still leave some of these concerns alive.

Assuming your second-hand phone kicks the bucket on the 13th month, what then? Your warranty died a month prior and you have 11 months left on your 24-month payment plan. Yes, you have the option of returning the device or exchanging it and so you exercise that choice. But it’s a dead device, and so a return will likely leave you paying for 40 percent of the remaining 11-month balance, thanks to their 60 percent buy-back for “significantly impaired” devices.

And to address the most questionable part of it all, even the 12-month warranty is solely dependent on whether your second-hand phone stopped functioning “through no fault of your own”. So who decides who caused what? Questions like these simply aren’t pleasant when dealing with second-hand devices.

Thus, we believe most Australians will stick to their preference of purchasing a brand new older model smartphone if newer models aren’t affordable, and then purchasing a separate SIM Only plan for it. But NU Mobile doesn’t allow that, again denying the customer an independent, well-reasoned choice.

As we’ve pointed out, in all fairness, Nu Mobile have some pretty good plans. They also have some very comforting terms for their handsets. But, as we’ve also pointed out, tying the two together simply takes away the flexibility and choice that Australian customers crave.

MVNOs are growing in popularity for their simplicity and flexibility, as well as their cost-effective value. NU Mobile only satisfy the value part with their plans, but they significantly tie the customer’s hands by forfeiting flexibility and choice, which in turn subtracts points from the overall value of their scheme. Forcing a second-hand phone on a customer who likes their plans just doesn’t seem like a winning strategy, but that’s exactly what the Nu Mobile concept does.