No Huawei? What Does That Mean for Phone Plan Prices?

Huawei claims it was right about price hikes on SIM plans as a result of Australia’s 2018 ban, which barred the company from participating in the country’s 5G rollout. The Chinese tech giant points to Telstra’s recent price increases as proof.

Telstra recently announced price hikes on its SIM Only plans. The announcement came when the telco was supposed add a $15 extra charge for 5G access, but it scrapped that idea in place of an overall price increase.

Optus and TPG Telecom (Vodafone) have skirted the question of additional charges for 5G access. Initially, TPG Telecom ruled it out, stating that 5G will cost the same as 4G. Recently though, the telco did an about-face, stating that it might charge more for 5G in the future.

So far, 5G phone plans’ higher prices seem to be the result of a lack of competition in the 5G equipment supplier market. Huawei, of course, sees Australia’s decision to ban it from the country’s 5G rollout as a direct cause of that lack of competition and, therefore, the predicted price hikes.

Huawei has been a major player in Australia’s mobile technology market. The company supported about half of Australians’ mobile broadband at one point. But in August of 2018, the Australian government banned the Chinese tech giant from building the country’s 5G network.

Australia wasn’t alone, however. Several countries joined in criticizing Huawei for being an instrument of the Chinese government. The United States led the charge, citing national security concerns if Huawei was allowed to build 5G infrastructure. Most European countries were open to Huawei, but some like the UK and Germany mauled over the idea of banning the tech company as well – the UK finally did. 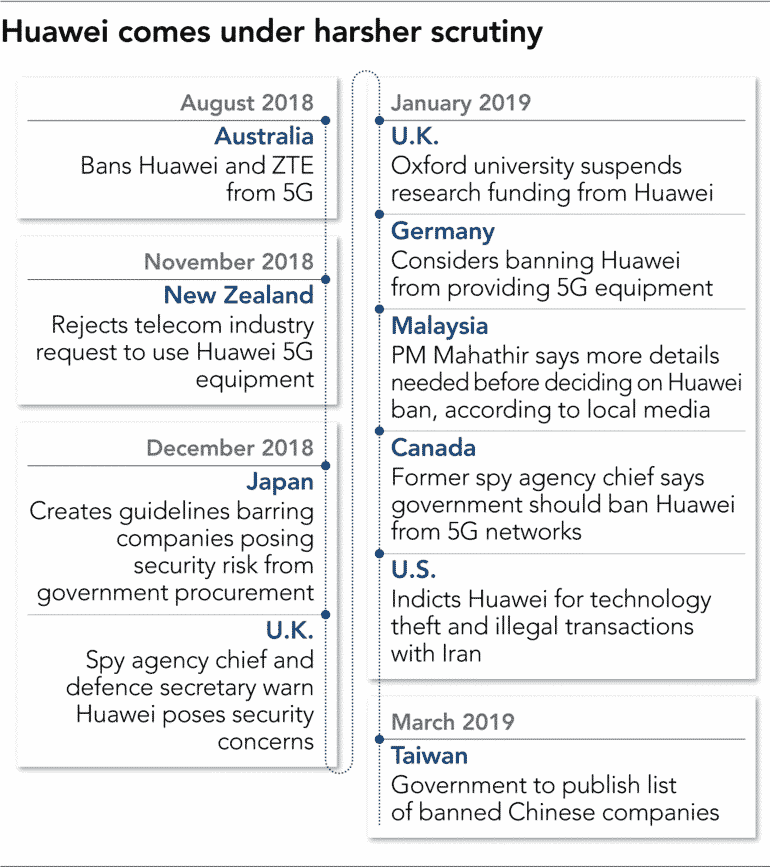 Several countries took steps against Huawei, either banning the company or considering a ban. src

The results of the Huawei ban

Huawei claimed that the Australian ban would result in higher SIM plan prices and inferior 5G quality. Right now, the tech giant seems to have been right.

Optus CEO Allen Lew admitted that its 5G network was inferior without Huawei. The telco had worked with Huawei for years, including on its 5G technology, before the government ban. Apparently, without Huawei, Optus’ 5G speeds and overall performance declined when working with other companies.

Huawei points to the British government’s confirmation that banning Huawei will cost it at least $3.59bn in extra costs and delay their 5G rollout. Those extra costs would have to be passed down to consumers in an effort to recoup expenses and losses.

Huawei also cited Frontier Economics, an Australian economic advisory firm, which predicted a $2.1bn increase in 5G rollout costs in Australia as a result of the ban. That, too, will be passed down to consumers.

Oxford Economics has also predicted that the Huawei ban will increase Australia’s 5G rollout costs by 30%, and that 3 million Australians will miss out on the technology as a result of the ban as well.

So why could this happen? Lack of competition – simple. When supply drops, prices increase.

In this case, with Huawei out of Australia’s 5G market, Ericsson has become the go-to vendor. This leaves a monopoly – or duopoly if you consider Nokia – which, no doubt, means the company has sole control over supply and, thus, pricing.

Huawei had intentions of bidding on Telstra’s 5G plans in an effort to challenge Ericcson’s deal with the telco. That, no doubt, would have sparked some healthy competition to drive costs down, regardless of which tech company would have ended up getting the deal. But today, that’s all speculation because the ban put a halt to the challenge.

Telstra tried to mask its recent SIM plan price increases as reasonable adjustments, considering those increases came with additional plan data as well. However, it’s obvious that the increases are 5G related.

Last year, Telstra announced that customers will be allowed to try out 5G free of charge for a year, after which access to the technology would cost an additional $15 per month on its Small and Medium plans. Instead, after that one year, Telstra recently abandoned that idea and increased the prices of all postpaid plans instead, and blocked the Small plan from having 5G access. That means that if you want 5G access, you must pay a minimum of $65 per month.

This scheme is essentially an additional cost for 5G, regardless of how its being sold. And while Optus and TPG Telecom (Vodafone) have been noncommittal on the question of extra charges for 5G, chances are they will eventually start charging more for the technology as well.

The fact is that the 5G rollout has always been an expensive idea. And with Huawei out of the picture and a resulting lack of competition, the 5G rollout has become an even more expensive prospect. Those expenses will in turn be passed down to telco customers in the guise of SIM plan price hikes.