With competition coming in, the Australian telco market is likely to get tougher especially for the big players like Telstra and Optus. As it normally is, competition comes along with opportunities for customers to choose phone plans depending on their preferences.

Among the factors subscribers look for before subscribing to a phone plan include affordability, network coverage, reliability, fair treatment, quality customer service, and innovation. Research has indicated that fair treatment is about 3 times as important as innovation in phone plans. 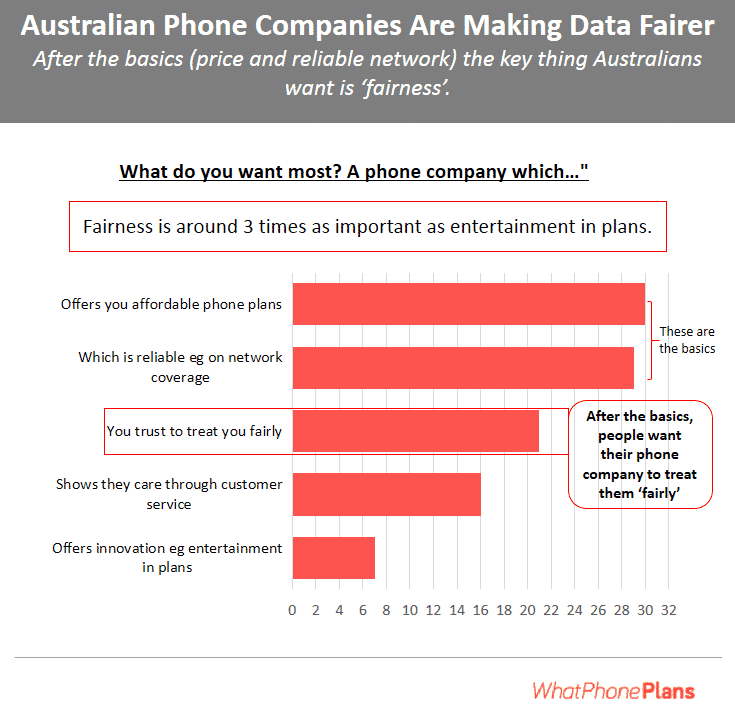 The Real Issues in Data Fairness

The way telcos are managing data is increasingly reducing the trust their subscribers have in them. Generally, customers are after phone plans that are fair. This may seem ambiguous at first, but fairness goes beyond a relative term to point at specific issues customers want addressed by telcos.

The big phone companies in the market are busy spending millions on content and gradually losing sight of the small yet important things they can do to satisfy their clients. For instance, they can build better data plans and make their data transactions transparent. From the customers point of view, fairness in data management includes:

Adopting a fairness approach to data management is not just beneficial to the subscribers, but the telcos as well. For instance, such an approach will reduce churn, improve trust, reduce complaints, enhance acquisition, reduce expensive content fees, and create a marketable unique selling proposition.

The Problem of Numbers

Despite the win-win scenario we have discussed above, companies are unlikely to follow that way. The reason is, they easily get hooked on the extra revenue they get when customers blow their data limits. This is especially true given the tough environment telcos find themselves in, which is characterised by shrinking revenues and margins.

To these companies, the fair data management ideas summarised above seem too expensive to execute. In their view, fairness means a reduction in the average revenue per user (ARPU) while ordinarily the number of subscribers migrating to other carriers is minimal.

The Opportunity for Tier 2 Companies

With the large companies dragging their feet in fair data management, MVNOs can swoop in and capitalise on this acquisition opportunity. With fair data schemes, smaller phone companies can encourage usage. For instance, they can give their customers a free GB after they exhaust their limit. This marketing change can potentially drive usage and create a sense of fairness to subscribers.

A good example of a MVNO that has implemented a fairness model is Belong Mobile. This is a subsidiary of Telstra, known for its data vault feature. Belong allows you to purchase data at fairer pricing and to keep it forever.

Using the Porters Seminal Quadrant, you can divide the telcos into 4 groups in terms of competitive advantage. On one quadrant is cost leadership, the other differentiation and on the remaining two, cost focus and differentiation focus.

TPG’s approach is mostly in pursuit of low cost mass market offering. Their cost base is small and operational efficiency high. In its strategy, TPG is likely to bundle their fixed services with their new mobile services to take advantage of their 2 million fixed subscribers and 360,000 customers currently on their mobile products. TPG has no existing customer revenue to protect and only needs 500,000 customers to break even which is about 4% of the available market.

If TPG can implement an unlimited data plan, it could gain almost half the customers they need to break even. This is particularly attractive for TPG bearing in mind their plans to spend $600 million building their own network for 4G speeds. The numbers will help them recoup as much as possible in the meantime before people move to 5G.

Therefore, MVNOs have a massive opportunity to attract subscribers from Tier 1 companies by offering them data management incentives which are pocket friendly. Belong has already set the pace hopefully others will follow suit.