This week, on a mission to help you find what phone is right for you, Whatphone gave me the Samsung Galaxy Note to review. I must admit, I was looking forward to seeing what Samsung had done with this device – my first go on a Phone / Tablet combination – or a Phablet as some have taken to calling them.

It’s probably worth mentioning here that I never read the instructions for a device. I don’t want to set the expectation with the User Experience team at the device manufacturers that I am anything other than extremely lazy.

The elephant in the room – how big is it ? 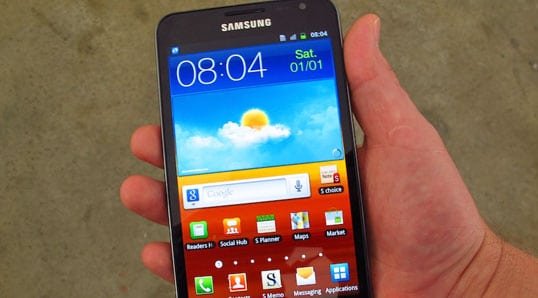 I expected a box closer to the dimensions of a tablet than a Smart mobile phone but it ( the box ) was about the same size as a usual Smartphone fare which hinted at the portability of the unit and Samsung’s positioning of the Note.

Initial concerns about not being able to put the device comfortably in to my pocket were revealed within minutes as prejudice. The extra half an inch on both height and width dimensions doesn’t suddenly make this unwieldy where the HTC One X or SII could fit. At 9.65mm thick it felt thin, and, given its face, light.

This is a really important point. A lot of people are going to write the Note off because of its size and they shouldn’t.

All in all, size was ‘manageable’. It was comfortable to hold portrait although I couldn’t quite get my one handed grip right in landscape which meant using the stylus it comes with was less convenient that way.

I must admit, the iPhone’s keyboard is better than any of the Android devices I’ve tested. Typing with fingers on the Note was slightly easier because of the increased screen size, obviously, it spaced the letters on the on screen keyboard out more.

This is an important factor for me. Android keyboards ( at least the ones installed when you buy the device ) are usually annoying. Not so here.

All in all, I don’t think it would be fair to describe this device as an elephant in the room. It was slightly larger and that actually got a few comments from people who noticed and asked about it.

It’s a slightly more expensive product, because of the specs of the components and capabilities I guess and because it’s half Smartphone, half Tablet. I must admit I did feel like I’d be happier with a pouch for it to minimise the chance of scratching the screen because …

What you get for the extra size on the Note is screen size, obviously. And be clear, it’s quite a screen.

I watched a film on it and could imagine myself comfortable on a plane for hours making the most of the screen’s capabilities rather than entrusting my AV entertainment to Jetstar.

As usual for recent Samsung releases, the device had an additional Micro SD card adapter which is something I always look for – given the amount of AV ( Audio Visual ) content I like to carry with me.

Internet Browsing was just fantastic over the 3G network. Loads of information on the screen, fluid movement. Browsing was a pleasure.

It would be remiss not to mention the stylus / drawing capabilities. They were fine but in my role at Whatphone, it’s hard to see them being anything other than a diversion for noisy kids who are hanging around.

The 8 Mega Pixel camera is brilliant and renders fantastically on the screen. Video is equally strong, shooting at 30 frames per second.

You can click these images for bigger versions. Remember though, these are optimised for this page – they are not the full image quality you would get from a Samsung Galaxy Note. They do give you a good idea of the camera quality even in low light though.

The Touchwiz software ( Samsung’s GUI – Graphical User Interface which sits on top of the Gingerbread – Android 2.3 ) is nice to use and the video editing capabilities while not immediately intuitive were learned quickly.

Making a second edited video would be a breeze. The dual core 1.4 GHz processor did struggle sometimes with short delays in the video editing suite but I can forgive that for HD editing in a handheld device. There’s a lot of processing required.

As usual with Gingerbread, there is a slight shutter lag between you hitting the ‘take a picture’ button and the snap going off. I found I noticed this more when returning from more current Ice Cream Sandwich Android products.

Talking of Touchwiz, it’s just great. The installed apps are fantastic ( although I find HTC offer more choice ) and gave me more than I needed to thoroughly test and use the device.

The size and brightness of the screen does, of course, present a challenge for the battery. Even including one which kind of looks like it could start a car.

The battery in the Note gave me pretty much everything I needed. I left mid day to venture in to Sydney, shot, admittedly, a lot of video and then watched a film – but then started getting the usual worrying notices about having to shut down apps and curtail usage.

On the way home, I took a lead from Kramer and listened to podcasts, trying to eek out the battery and see how far it would take me. To be fair to the Galaxy Note, I got home 24 hours after I’d left and it was still firing although my feeling is that it was on fumes.

The device worked fine as a ‘phone – the basics you’d expect. You’ve seen the bits I loved.

Overall though, for me, the Note didn’t quite do it. It was neither this or that. I felt I’d sacrificed some portability for the benefits of a tablet when, really, I use my tablet at home, in front of the TV. I use phones when I’m out and about.

The Note uses the same Android and Touchwiz software as is available on other devices ( Android I mean and assuming an upgrade to Ice Cream Sandwich – 4.0 – by the user – like I say, mine came with Gingerbread 2.3 ) so the decision to get a Note is a decision about form factor.

Other situations where its form factor would be most useful – like on a ‘plane or if I took a train to work and back every day for an hour – are too rare for me to warrant the investment in, what is, a more expensive device.

That said, it was great in a lot of ways and the size is not as off putting as you’d think.

I also found the device grew on me the longer I had it. I hear the same from other people in the Whatphone office. So watch the deals and if the Gal SII goes EOL ( End of Life ) and the Samsung Galaxy SIII / HTC are substantially more expensive, make a note and give it a go.

Check out this article if you’d like to compare the Samsung Galaxy Note vs every other device in the Whatphone top 7.

Hope you find what phone is right for you.