Smart Guide To NOT Being On Your Phone All The Time

This is great for the progress of technology, but it isn’t necessarily that great in other aspects. Smartphones are useful, but they can also be so useless when we use them unnecessarily. Many Australians agree with the previous statement. In fact, the same 2018 Deloitte report found that 41 percent of Australians worry that they use their smartphones too much, and that proportion was expected to grow. 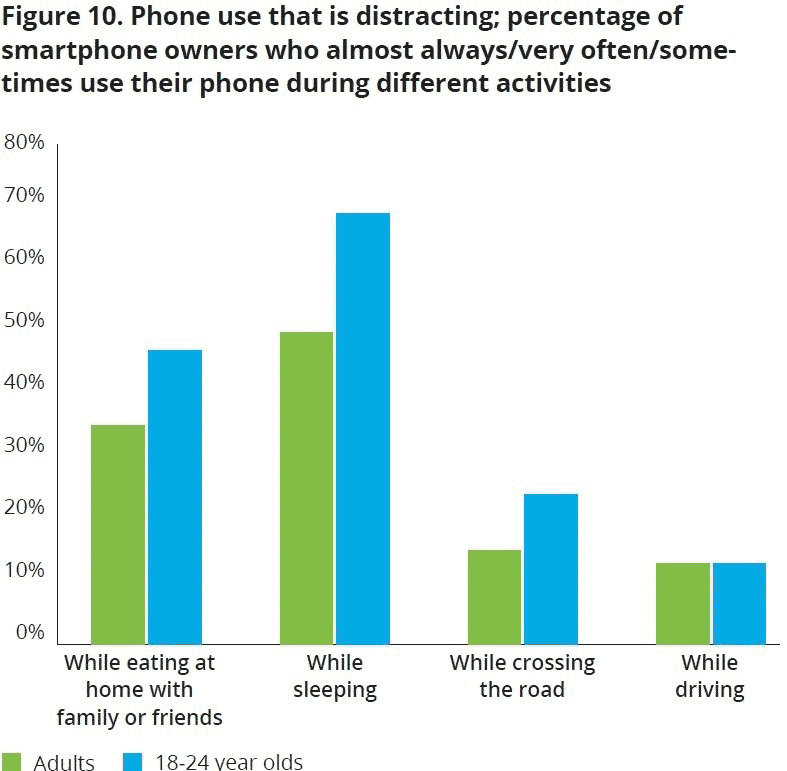 Deloitte report suggest high percentages of adults are distracted by their phone usage, especially those between 18 to 24 years. src

So how do you reduce your smartphone usage? As difficult as it seems, it’s actually possible. We’ve put together 3 smart tips to guide you towards your freedom from using your smartphone all the time.

How COVID-19 has increased smartphone usage

As if we weren’t already on our smartphones long enough, the coronavirus pandemic came around and gave us even more time on our hands. Measures were taken to keep COVID-19 in check, mostly centered on staying at home, working from home, and generally maintaining social distance.

Being away from our friends and family for so long has resulted in a spike in mobile phone usage. In fact, telcos like Telstra and Optus experienced network outages from congestion due to the high network traffic. And with the vast majority of the country owning a smartphone, telcos experienced almost a 70 percent spike in data traffic between 9am and 5am, a time frame when most Australians would have been at work or school if there was no COVID-19 to worry about.

These increases are the norm in today’s world, but they don’t have to be. Using your smartphone all the time can literally keep you from doing the things that are truly important, so figuring out how to put that device down can do wonders for your overall wellbeing.

3 smart tips to avoid using your smartphone all the time

1. Turn off most apps’ notifications

Pretty much every app on your phone can notify you whenever it feels like. It might be an update, or a suggestion, or anything to remind you that the app still exists. At the end of the day, it’s all just a ploy to get you to spend some time on that app, where you’ll be bombarded with attempts to keep you on that app longer than the time needed to simply see what the notification was about.

The most common of these are social media apps, where you get alerted pretty much every time your online friends do something – anything. At times you check out these notifications and end up spending way too much time on the app, after being kept on longer by other feeds.

To avoid this, turn off your your apps’ notifications. You don’t need to know every time someone posts a status update on Instagram, or tweets on Twitter, or comments on Facebook. Go to your phone’s settings menu, scroll to apps, and shut off each app’s notifications (except the important apps like your phone call app, SMS app, and perhaps your email app) to get some much needed peace of mind.

Social media can be addictive, and it counts for a chunk of the time we spend on our phones. Sometimes social media apps can be very useful – for instance, you might get updated on latest breaking news, they serve as an easy and convenient way to communicate with friends and family, and they can help you keep your friends and family up to date about what’s going on in your life without actually having to call or text.

But social media can also become extremely distracting, and sometimes we bring the distraction upon ourselves by posting too much. That’s right – although you might spend a lot of time scrolling through other people’s posts and updates, you might equally spend too much time posting your updates and scrolling through what people have to say about them. Avoid falling into the trap of frequent updates to cut down on your smartphone usage.

We know phone calls went out of style a long time ago. But despite the fact that half of all phone calls get ignored, they can really come in handy in cutting down your phone usage.

Instant messages, chats, texts – these are the common ways people communicate these days. Part of the reasons are because they are less intrusive, they can be direct, and they don’t require immediate responses.

But that’s not always the case.

A lot of times, when we text or chat, the conversation drags on and on for a lot longer than anticipated. You might get caught in an endless loop of new topics as both parties have more time to think about them. You might also get other messages while responding to one, which can suck you into several other endless chats all at the same time.

But making a phone call can help you avoid these things because they are usually targeted at one party, allowing you to avoid being contacted by others who see you’ve logged online. Phone calls might seem uncomfortable these days, but that’s all the more reason why they might be quite brief so you don’t get too distracted. Just make sure you give a heads up before dialing a number to avoid falling into that half of phone calls that get ignored.

Smartphones are everywhere. You probably have one, and so do most people you know – if not all. But these helpful gadgets have a way of taking over people’s lives and becoming a distraction from the things that really matter. If you feel that way, then you’re not alone – over 40 percent of Australians felt the same way in 2018 and that proportion has definitely increased today.

To keep your phone usage in check, there are a number of things you can do. Shutting off notifications is a key starting point, especially for those tempting social media apps. The tips we’ve put together should hep you cut down on your smartphone usage, but it’ll take a lot of discipline to really make them work.