The Internet of Things- What Could Go Wrong?

The Internet of Things (IoT) refers to interrelated devices that communicate ot transfer information among themselves using the internet. It could be computers, mechanical or digital devices, or even human beings or animals with outfitted with sensors that are capable of transferring data.

You probably already have an IoT device. Smartwatches for kids are quite popular today, coming with their own IoT plans. Such devices demonstrate the IoT at the consumer level. Here’s how: The smartwatch is fitted with a sensor of some kind that detects where the child is, and whether the child has left a designated area. That information is then sent to your smart phone via the internet, alerting you of what just happened.

But while the IoT is clearly beneficial in today’s world, the technology doesn’t come without drawbacks. In this post, we’ll take a look at what could possibly go wrong with the IoT, but first let’s take a deeper look into how the technology actually works.

How does the IoT work?

IoT devices are suited with sensors that collect data about their environment. These devices then share collected data by connecting to an IoT gateway or other edge devices where data is either sent to the cloud to be analyzed or analyzed locally. Sometimes, these devices communicate with other related devices and act on the information they get from one another. 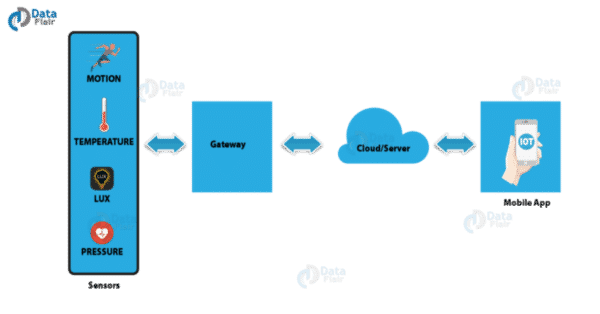 In this case, IoT devices do most of the work without interference from people. However, people can still interact with them by issuing a command, setting them up to take a particular action when sensors detect specific parameters, or just by accessing the information they collect. Here are a few examples:

All of these and more are achieved by the IoT through sensors in the devices that detect changes in the environment, and then transfer data to the cloud (or store locally) using the internet for data processing.  The information is then analyzed to confirm if changes are required to be made on the IoT device (based on predetermined settings), or the analyzed data is sent to a control interface (which could be your Smartphone, tablet, etc.) where the user can either make changes or not.

How Australia is harnessing the IoT

Australia is currently ranked as number 21 in the world in the use of IoT, offering significant economic benefit through smarter use of infrastructure, efficiency gains, and more sustainable business growth. One major move is the partnership with the Australian Computer Society (ACS) to evaluate the potential economic benefit of the IoT.

As a result of the extensive takeover of IoT technology, five sectors have the most to gain:

In these sectors, Australia has the opportunity to bridge the gap in productivity through the intelligent use of the IoT., despite how new the technology is.

3 most likely things that could go wrong with IoT

Yes, the IoT has a ton of potential, but like most technologies, there are some concerns. Here’s a look at three potential problem areas:

People, organizations, and even countries are embracing the digital transformation the IoT brings to better meet their daily needs. While that might be a worthwhile venture, it is also very important that proper research is carried out to ensure efficient use of IoT while keep risks low. Knowing exactly what can go wrong with the technology is important to keeping those risks minimal, or solving them if and when they occur.