These 3G Phone Plans Are All You Need

If you get a 3G SIM Only deal from a smaller phone company, you can save about 50% per month.

These days, 3G is the lowest level of technology you’ll get in any newly acquired phone. 3G phones are just normal phones which have a slightly slower data connection than their 4G equivalents. We’ve gone in to some depth previously on both 3G and 4G so we won’t repeat that here.

Why does 4G data cost more than 3G data ?

In many areas of our lives, we’re used to paying more for better service and higher speeds. We pay more to get a letter delivered first class than second class. We know fast cars cost more than slower cars. Sending a package by courier costs more if you want it there next day. The data you buy in a phone company plan can be considered analogous. It might be helpful to think of 3G as regular unleaded fuel. 4G data then offers speeds which you could consider to be the equivalent of super unleaded fuel.

From the phone company’s perspective, 4G data costs more than 3G data because each requires a network upgrade. Optus, Telstra and Vodafone spend billions of dollars each year maintaining and upgrading their network infrastructure.

The big phone companies charge you for 4G anyway

You’ll be charged whether or not your phone can even receive 4G data speeds.

Until 2011 and the release of the iPhone 5, 3G data was the latest thing. Up until that point and for the previous 5 – 10 years depending on where you were in the world, the best data delivery technology was 3G. Now, 4 years on from the first 4G device, finding a plan with 3G data built in to it rather than 4G isn’t always easy. You certainly won’t get one from those big phone companies.

Phone companies are more focused on the proportion of their customers who have moved ‘up’ to 4G than those remaining on 3G. 4G customers use more data and they do it in a way which is more efficient for the phone companies. In mid August 2015 Optus, as a midpoint, reported that 37% of their customers on 4G and are just about to close their 2G network. It can reasonably be assumed then that more than 50% of people still have a 3G phone, even now.

When you do find a 3G plan and when you have a 3G phone, putting them together is the closest thing that the industry has to a pricing loophole. 3G plans start at lower prices than their 4G equivalents. 3G plans cost around 50% as much as plans from the major phone companies. If you use your phone primarily for voice calls and SMS, you might want a 3G plan anyway just to save the money on a data service you’re not interested in using.

What’s more, there are choices on each of the 3 major networks’ 3G data infrastructure : You can get a 3G plan on Optus, Vodafone and Telstra, you just have to know where to look.

The reasons it makes sense to use a 3G phone

3G is older technology but it can absolutely make sense to get a 3G plan. People who buy 4G plans and phones are, even now, early adopters. One of the definitions of early adopters is that they are prepared to pay more for new technology.

There are those for whom a phone represents a useful tool rather than a fashion statement. Many of these people, in fact, as we’ve said, the majority of people overall, have 3G phones. 3G phones themselves are cheaper and the plans are too. 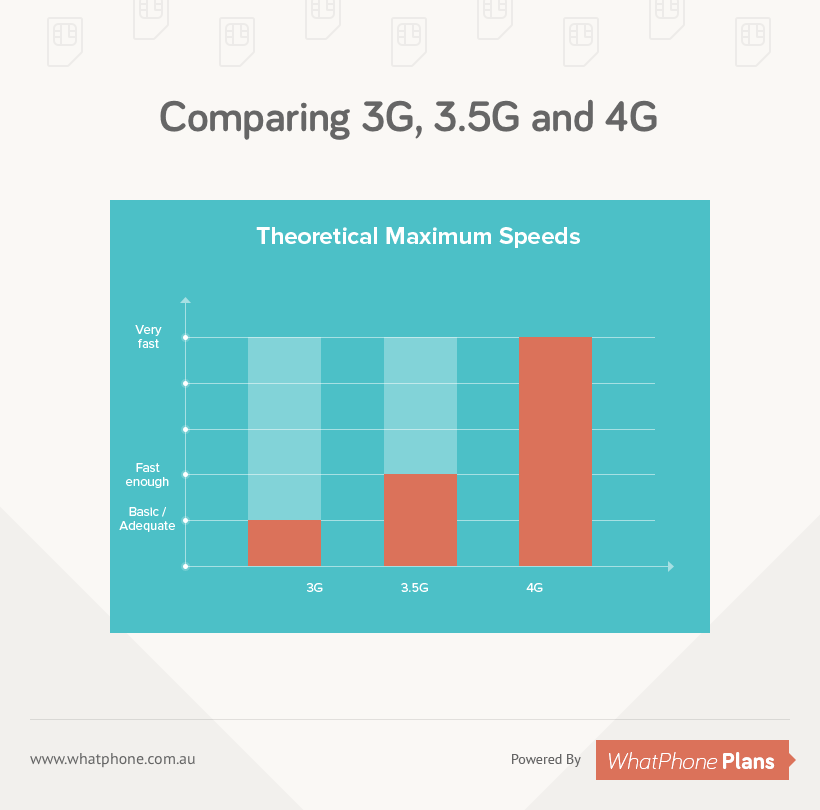 Reasons 3G has been superceeded

No-one is suggesting that 3G is the best technology available. 4G is better overall ( if a lot more expensive ) and here’s why.

Phone companies are part of the never ending technological march in to the future. 5G ( the successor to 4G ) is coming with traffic prioritization for driver less cars and emergency services. 4G phones get cheaper all the time and they do offer a better experience.

In the meantime, being slightly behind the technology adoption curve can work to your advantage. Choose one of Australia’s MVNOs or phone resellers and you’ll often find yourself paying 50 % of what you would for a 3G plan than if you went to one of the big boys.