With the newly merged Vodafone-TPG telco, Australia’s already competitive telco market is about to become even more so. After a long drawn-out battle with the ACCC over the $15bn merger, a federal court finally gave the telcos the go ahead. Almost 2 years after announcing the merger, TPG Telecom Limited became the new third largest telco in Australia.

This means a lot. It isn’t just about TPG Telecom but the telco market as a whole. Telstra and Optus had pushed hard while the merger was tied up, snatching up valuable market share as Vodafone reported loss after loss. But with the merger resulting in a bigger telco with much larger capacity, expect a series of plays from TPG Telecom to shake up the market and recoup those losses.

But what exactly will those plays be? Well, only time and TPG Telecom really know, but we can certainly speculate.

Telstra and Optus gained ground while Vodafone-TPG merger was tied up, but they took some losses as well

Vodafone spent a lot of time focusing on battling the ACCC, which opposed the merger with TPG. During that time, Telstra and Optus took the opportunity to expand their customer base and get a head start on 5G.

But it wasn’t all positives for Telstra and Optus – they, too, reported some losses:

So while Telstra and Optus were successful in maintaining their market share as the leading telcos in the country, it came at a cost. Because of how competitive the market is, both telcos had to slash prices and revamp their offers to lure customers. This, in turn, led to declines in revenue even with the increased customer base.

But that’s the typical way to gain momentum in the competitive telco market – slash prices with promo deals or even permanently. But the costs to a telco’s revenue are nothing to smile about. So will TPG Telecom use its strengths to make the same price slashing moves to gain lost ground?

What the Vodafone-TPG merger means for newly-formed TPG Telecom

Vodafone hit it’s spectrum limit prior to the merger with TPG. This meant there was no room for growth, and the telco lost customers. TPG, on the other hand, had lots of unused spectrum. The merger means the newly formed TPG Telecom has around 60 percent more spectrum than Vodafone did. 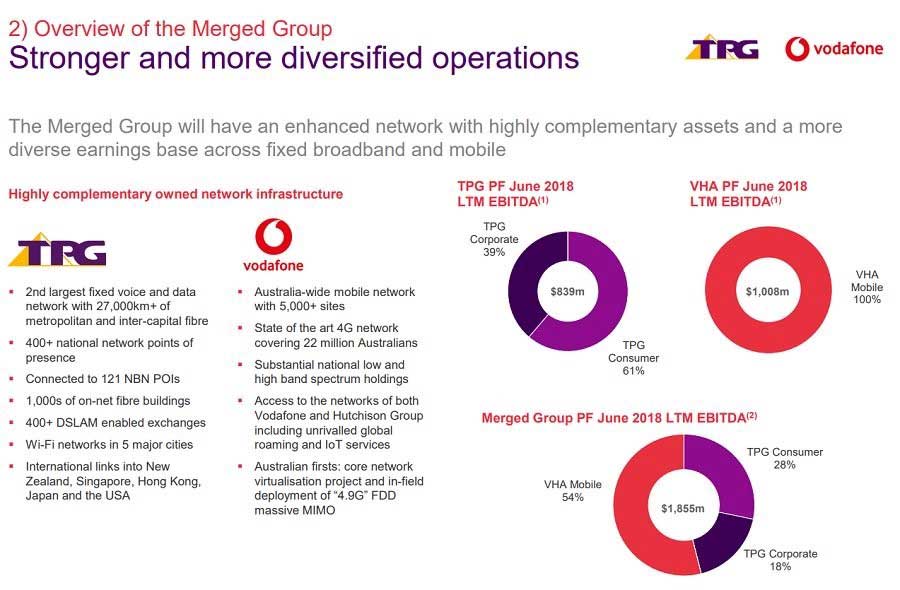 Combining the strengths of TPG and Vodafone could make TPG Telecom a major threat in the telco market. src

This is a big deal for the market. It means great capacity for 4G and 5G spectrum for TPG Telecom, which means plenty of room for more growth and customers. And with Telstra and Optus already experiencing revenue losses despite gaining more customers, TPG Telecom could make some aggressive plays to send those two leading telcos into even more losses.

Perhaps this could mean following Telstra’s and Optus’ footsteps by slashing prices and offering even more inclusions in mobile plans. While this would be sure to gain more customers, can the newly merged telco really take more losses after already sustaining deepening, consecutive losses?

TPG Telecom could also opt to raise prices, instead, in an effort to recoup those consecutive losses. Telstra recently did this with its postpaid plans, but that’s only after they’d already increased their customer base by slashing prices. In other words, such a move might not help Vodafone regain customers or even recoup revenue right now.

Telco is about scale. It is a high fixed cost business and the key thing Vodafone always needed was scale – a lot of customers to split those fixed costs over. Vodafone’s merger with TPG means the newly-formed TPG Telecom has that potential scale. To get those new customers, TPG Telecom can slash prices and send Telstra and Optus into an even more competitive market where they will be forced to do the same and sustain even more losses. Or TPG can increase prices to try and gain back lost revenue.

But there’s a third option that makes more sense – keep the prices exactly the same and offer telco discounts and/or more data. It’s lazy marketing but it’s what telcos know. TPG Telecom could significantly increase the number of GB sold in a phone plan and keep their prices the same. By doing this and offering more promotions that cut pricing, the “official” prices of plans and the brand don’t have to change, and can kick back in whenever the promo expires or is used.