What Does ‘No Lock-In Contract’ Mean? 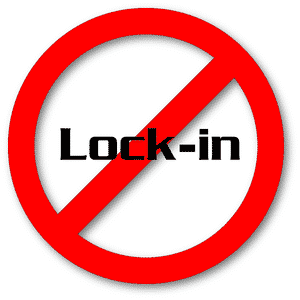 What is a phone contract?

Traditionally, phone contracts are contracts in which individuals procure a mobile device at a much smaller initial outlay than buying it outright. Once procured, the contracted individual will pay for the device over a stipulated period of time – usually 12 to 24 months. Since phone contracts are often provided by telecommunication companies, they come alongside plans on calls, texts and data.

What is a lock-in phone contract?

A lock-in phone contract is an agreement entered into by a teleco and a subscriber, in which the former provides the latter with a mobile device. Over a stipulated period of time, the subscriber must pay off the mobile device as provided by the telco.

This sounds like a pretty simple process, however, there is one catch; the mobile device can only function with a sim card provided by the telco. In essence, the subscriber is ‘locked in’ with the telco that has provided the device.

What does ‘no lock-in contract’ mean?

Nowadays, many of Australia’s major telcos are ditching lock-in contracts for ‘no lock-in’ contracts as this affords their subscribers more flexibility and ease.

Vodafone became the first telco to rid itself of lock in contracts in August 2017. Eventually, Telstra followed suit in 2019 with a massive overhaul on the structure of its phone plans and electronic products. Announcements concerning this overhaul were first made in 2018, however.

Types of no lock-in contracts

Examples of month to month and other types of plans being compared on Whatphone.com. Source: Whatphone

Final words: What are the benefits of no lock-in contracts?

By removing lock in contracts from their plan ranges, many telcos have opened up an entirely new dynamic of benefits to their subscribers. Some of these benefits include:

Thus, as stated, the decision is solely dependent on the customers’ needs. Both have advantages and disadvantages.