The NBN might see some much-needed improvement. Federal communications minister Paul Fletcher has announced upgrades to the NBN, particularly that the network will roll out fiber to homes to deliver download speeds up to 1Gbps.

The announcement comes at a critical time when 5G is dominating the telco news in Australia. The NBN, on the other hand, has faced criticism by both consumers and telcos.

But 5G has continued to roll out, with Telstra leading the way with over 2,000 5G base stations so far, and some really fast download speeds. (link to, “5G Update November 2020: Where can you get fast data now?” article) Telstra, though, also sells NBN plans, so how does a telco allow both offerings to coexist? And with the NBN upgrading to fibre, this means a significant increase in speeds, faster than current 5G averages. So how could this new NBN fiber development affect Telstra’s 5G sales?

The NBN has faced criticism since its rollout began

The NBN has been a disappointment to many consumers. The technology promised high speeds and reliability, but customers complain about slow speeds, down time, and outright failures that take a long time to resolve, even when technicians finally show up to fix issues. 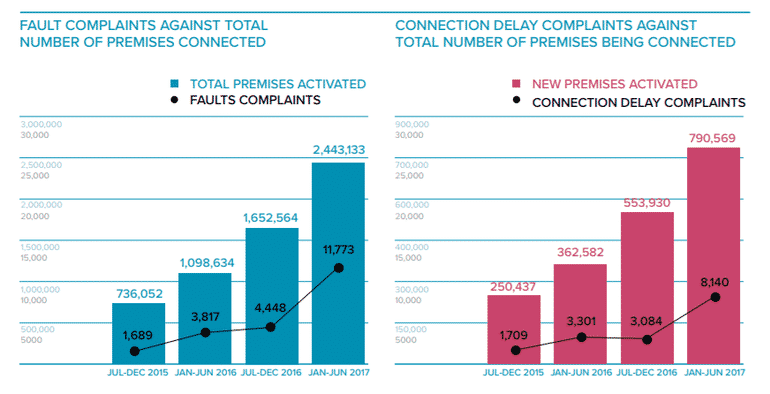 Rising complaints about the NBN. src

But consumers aren’t alone in their complaints. Telcos that resell the NBN to consumers have also complained, but for a different reason. They claim the profit margin on NBN services is too slim because the government sells their NBN services at such high costs, and has proposed even more taxes that further trim those slim profits.

But telcos like Telstra must also sell NBN plans, even though they may eventually have a better alternative in 5G home wireless broadband, both in speed and profit margins. Telcos want to sell mobile plans because they make them the most money. Compare that to the NBN where telcos have openly complained about profit margins.

The NBN’s upgrade to fibre will boost its speeds significantly

The NBN was initially slated to roll out with fibre cable. However, copper cables were eventually used to save costs and speed up the rollout. Those copper cables are the primary reason for the poor performance of the NBN, mainly in speed and reliability.

Now, the NBN plans to borrow $3.5bn to upgrade to a fibre network where fibre infrastructure already exists. There are also plans to have 75% of all fixed line premises connected via fibre.

Although fiber will eventually give the NBN ultra-fast speeds, Telstra 5G is faster than the current NBN

Right now, however, Telstra 5G is faster than the NBN. In fact, according to Open Signal, Telstra currently has the fastest 5G network in Australia when compared to Optus.

Telstra also has the widest coverage in the country, recently announcing that 41% of the population has now has access to Telstra’s 5G network. Here’s a brief look at Telstra’s 5G network so far: (link to, “5G Update November 2020: Where can you get fast data now?” article)

But because Telstra 5G has not been fully rolled out, its coverage is much thinner than the NBN. As a result, any kind of competition between 5G and the NBN would have to wait. But is such competition even possible?

Final words – Can Telstra use 5G to compete with the NBN?

Even if Telstra was allowed to use 5G to compete with the NBN, it would be difficult. First, Telstra 5G has less coverage than the NBN right now, so its faster speeds as of today won’t be worth much if you can’t get coverage in a particular are where NBN has coverage.

Second, the NBN will eventually upgrade to fibre, which is much faster than current 5G networks. Such ultra-fast speeds would be enough to win consumers over.