What The ‘Right To Repair Your Phone’ Means To You 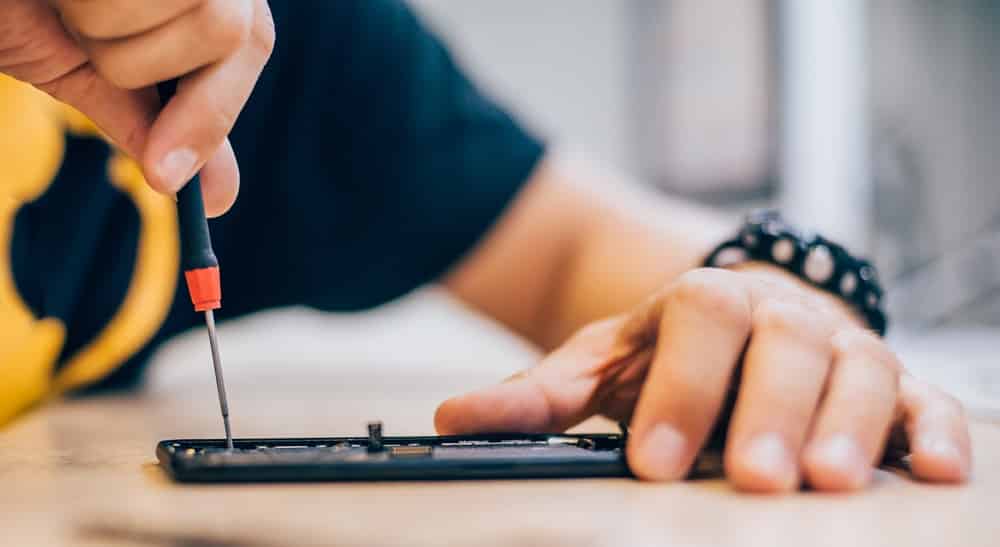 The manufacturer’s take on phone repairs

What happens when you can’t fully exercise your right to repair your phone? Or do you even have that right at all? Consumers are legally entitled to repair their goods. However, manufacturers can limit the extent to which consumers exercise such rights by denying access to the necessary information, tools, and parts needed for repairs.

To boot, the cost to repair phones through authorized service centers can be exorbitant in comparison to the cost of other alternative ways to repair phones. That’s if a comparison is even possible, as you might be stuck with only just the authorized service centers due to the complexity of the device. To make things worse, smartphones are quite fragile these days, leading to other third party add-ons such as phone insurance. 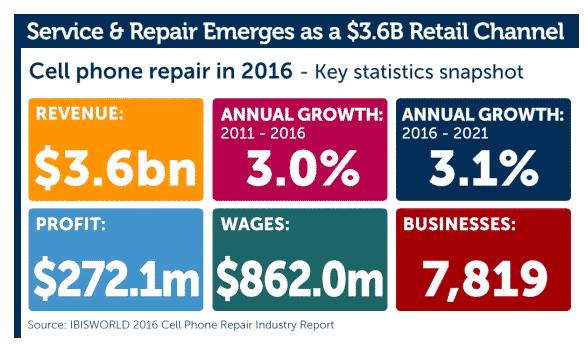 The phone repair business is a huge one. In the United States alone, 73 million consumers experienced phone damage, leading to USD$3.6 billion in revenue. Source

A few decades ago, most consumer electronics were much easier to fix without the manufacturer’s direct involvement. DIY (Do It Yourself) electronic projects were all the rage in those days. However, consumer devices are becoming more complex for customers to tinker with, and so actively involving the manufacturers is the norm of today.

Apparently, some phone companies are seizing on this increasing dependence. They put customers between a rock and a hard place, charging hefty repairs cost or offering awfully costly phone replacement deals. Tactics that deter customers from fixing phones through unauthorized agencies — such as electronic locks and restrictive warranties — also feature in many phone companies’ playbook.

Legislation that protect your ‘right’ to repair your phone

In the United States (U.S.), for example, a national right-to-repair bill for farm equipment was proposed earlier this year. The bill’s sponsor, U.S. Senator Elizabeth Warren of Massachusetts, knows first-hand how such a bill would likely turn out. In her home state, a similar bill was enacted in 2012 that mandates car makers to avail customers of information and tools necessary for repairs, and for new cars to support generic diagnostic tools.

However, Senator Warren’s proposition is only tailored towards farm equipment. Every consumer deserves a well-instituted right to repair other equipment and purchased property as much as farmers do. Phone owners can also benefit immensely from such a bill, having the choice to avoid high costs of repairs in authorized service centers. Such a bill could also have environmental benefits, as phone owners will no longer have to throw away phones that can only be repaired in authorized centers that charge exorbitantly.

The Federal Trade Commission in the U.S. has weighed into the matter, announcing an up coming hearing in July. However, national legislation may not be the only way to solve the problem. Phone companies can adopt national standards for providing wider access to tools and information for carrying out repairs.

However, a form of government regulation — not necessarily on the federal level — might be needed to kick-start the widespread adoption of such national standards. The Massachusetts right-to-repair bill triggered a national dialogue which led to an agreement between car companies and individual auto-repair shops across the country over easier access to tools and information needed for auto repairs. 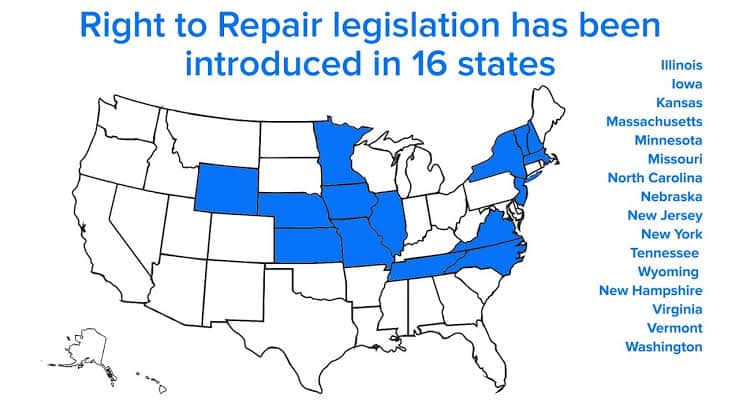 States in the U.S. where right-to-repair bills have been introduced. Source

A similar bill,  which has been in the works in Minnesota for several years now has been tipped to inspire rights to repair initiatives on the national level.

The push back from manufacturers

Apple, one notable manufacturer that regularly charges exorbitant fees for repairs, has tried to make amends lately. It no longer voids the warranty on phones if their screens are repaired by other companies. It also paid for the installation of screen-repair equipment at 30 branches of Simply Mac, an independent retailer, in parts of the country that have been without authorized Apple technicians for years.

However, like many other phone companies, Apple would prefer policymakers to stay out of the issue. The tech giants are lobbying aggressively against state right-to-repair bills. And like other companies doing the same, Apple claims such bills might undermine their reputation and jeopardize the quality of devices.

The tech giants have deployed even more disturbing tactics to derail right-to-repair bills. Lydia Branch, a Nebraska state senator who proposed a right-to-repair bill in 2017, was barraged with threats of increased rates of hacks and lithium battery disasters by Apple lobbyists.

Manufacturers obviously see the repair industry as a lucrative one. Phones are fragile gadgets, especially newer models. Also, they are mobile, on-the-go devices. These factors make smart phones easy to break, as they are frequently used in situations where they might be dropped, causing damage. Water damage is also an issue, despite some manufacturer’s recent attempts at water-resistant smartphones.

The prone-to-break nature of these devices make repairing them big business. However, consumer rights dictate that a right to repair these devices should exist, especially considering how fragile they are.

While it’s acceptable to persuade customers to use authorized service centers, or to go for new phone deals, it’s unacceptable to leave customers with no other alternative way to repair defective phones. The current state of affairs is worrisome, and requires urgent legislative intervention.