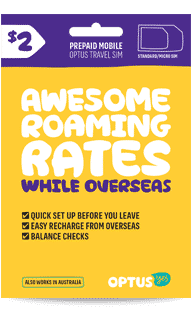 Australian phone companies are in an intense competition to acquire new customers, so Optus seems to be testing out a different approach. With thousands of visitors passing through airports daily, the major telco has decided to target travellers with a SIM card that offers an irresistible deal for a very affordable price.

Travellers passing through a number of Australian airports including Brisbane International, Gold Coast, Melbourne, Perth, and Sydney International airports will be able to pick up one of the new travel prepaid SIMs from the Optus store or other airport stores such as WH Smith, awpl, and NewsLink.

The travel SIM is valid for 28 days, although visitors will have a limited chance to recharge. It costs only AU$30, which entitles users to unlimited standard talk and text across Australia, and unlimited standard international calls to Canada, mainland China, France, Germany, Hong Kong, India, Ireland, Japan, Malaysia, New Zealand, Singapore, South Korea, Sweden, United Kingdom, and the United States.

However, the biggest drawcard is the massive 60GB of data that comes with the SIM. Once the data quota has been reached, the card is rechargeable, but the value declines each time. It will cost travellers $30 to recharge – the first and second renewals get 35GB of data, and subsequent renewals only 10GB.

To further increase its appeal, those who purchase the SIM will also be able to download the free MyOptus app. The Optus Perks program is a standard feature for Australian customers, giving them access to exclusive deals. However, a new program will give international customers additional tourism-related deals and discounts in addition to the usual services like tracking usage.

The new offshoot of their perks program is aimed at tourists utilising their new travel SIM. Called “Experience OZ”, the app will offer tourists a 15% discount at more than 2000 attractions, tours and activities around Australia.

International roaming can be an extremely expensive part of travel – particularly if the traveller neglects to keep a close eye on their usage. Bills totalling thousands of dollars have been reported by people overseas who have forgotten to connect to Wi-Fi and accidentally used roaming when streaming video, for example.

Using a mobile phone overseas is made possible by agreements between international telecommunication companies. A traveller is able to access phone services in their travel destination, and then the bill is forwarded to their usual phone company and eventually passed on to the traveller – often at a significant mark up.

While phone companies have traditionally made all international roaming expensive, data comes at a particularly high price. Having access to mobile data at a reasonable rate can make a trip much more enjoyable, with on-the-spot access to maps, social media, recommendations and online booking functions. These days, many people prefer to communicate online as well, choosing apps like Facebook Messenger, WhatsApp and Skype over traditional phone calls.

Optus have made travelling in Australia much more convenient and affordable – and at least for the meantime have all but ensured that travellers will choose Optus during their time in the country. While the advent of eSIMS will potentially change the way travellers use their phone overseas, for now Optus have taken advantage of the large volume of visitors that arrive daily. How much difference it makes to their bottom line, only time will tell.