Virgin Mobile Gone by 2020 as Optus Pulls the Plug 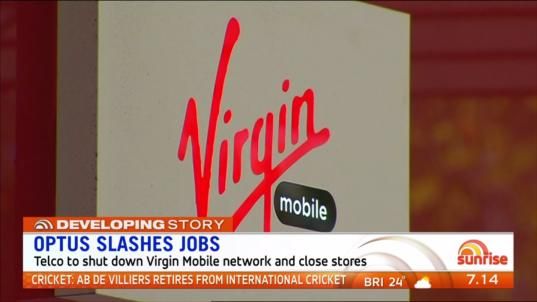 Optus has confirmed that Virgin mobile will be shut down, with all Virgin customers who do not find another provider automatically moved to Optus. The decision confirms rumours that have been circling for some time, and comes as TPG enter the Australian mobile market as the fourth major telco. This decision reflects the greater push on telcos to restructure and offer more than just basic plans.

In 2000,Virgin Mobile began as a joint enterprise between Optus Mobile and Virgin Mobile UK, with Virgin Mobile bought out by Optus in 2006 for $30 million. The plans they offered were lower-cost options that focused on the youth market. They were among the first to identify customer demand for high data inclusions in their plans.

In December last year, Virgin stopped offering pre-paid plans, focusing only on post-paid SIM and phone plans. They are one of the only MVNOs that offer premium phones on a plan, making the iPhone X and other high end devices available to customers. Unlike most MVNOs, they have 36 stores Australia-wide and are in competition with the bigger players such as Telstra, Vodaphone and Optus themselves.

Why Shut It Down?

While it has been reasonably smooth sailing for some time for the major telcos, it’s now a time for re-evaluation in the face of coming changes. Many companies already offer unlimited calls and text, and with the new “unlimited” data plans emerging, there isn’t much more room to stretch in terms of plan inclusions.

TPG has entered the running by investing in their own infrastructure, making them the fourth major player in Australian telecommunications. Many big companies are shifting their focus from purely mobile plans to a range of investments in areas such as media and technology to stay ahead of the game. Optus has to look elsewhere to gain more customers and increase their own revenue.

Virgin Mobile had a strong reputation as a brand that appealed to younger customers, offering low cost plans with comparatively high data. With the appearance of a large number of low cost MVNOs using the infrastructure of the three major telcos and offer very low plans, the appeal of Virgin is somewhat diminished.

Virgin Mobile is also a competitor for Optus, even while being owned by them, and Optus needs to gather its customers close during these times of restructure. Optus currently has to pay Virgin Mobile UK for the brand licensing, and getting rid of the Virgin Mobile brand will free them from the branding costs as well.

Optus are counting on more customersas many people currently subscribed to Virgin Mobile who don’t opt out will move automatically to Optus. However, presumably many Virgin Mobile customers will take the opportunity to research their options instead of automatically defaulting to a plan that may not offer the best deals.

Optus have traditionally focused on offering a high quality service as opposed to low prices. However, their current tactics to attract more customers could jeopardise their brand reputation. While moves such as requiring EPL fans to sign up on a long-term contract in order to access content might have gained more customers, it hardly inspires loyalty to the Optus brand.

These tactics certainly increase the customer base in the short term, but hardly increase trust and brand loyalty. Virgin Mobile plans generally offer better value for their customers, so closing down of the brand and the resulting loss of jobs could create resentment instead of enthusiasm.

Optus has also been fined $1.5 million by the Federal Court after the ACCC filed court proceedings in regards to Optus deliberately misleading their customers about their NBN rollout. Customers were advised that services would be cut off much earlier than they actually were, and it was implied that customers could only re-sign with Optus, when in reality they could have chosen another ISP. The ACCC estimated that Optus benefited by around $750,000 by making these misleading claims.

Virgin Mobile currently have around 36 stores across Australia, representing around 200 jobs. It does appear that Optus is looking at moving some (or all) employees over to the Optus brand, but the details of any possible redeployment have yet to be confirmed.

Optus have said they will phase out the brand over a period of two years, so Virgin Mobile should be gone by 2020. Virgin customers who choose not to change providers will be switched over to Optus automatically. Customers will be contacted directly about the changes.