Get Generous With Data on Belong Mobile Plans 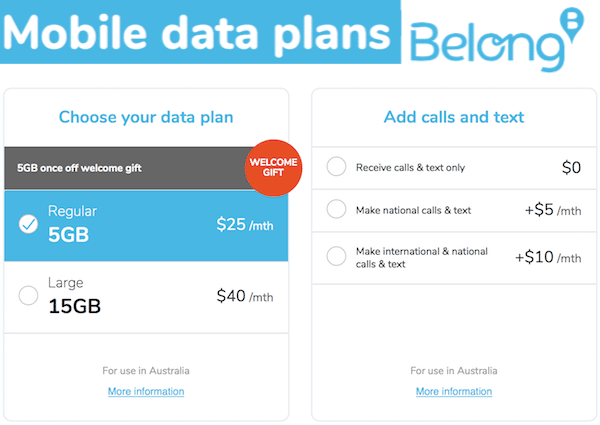 Phone companies – especially MVNOs – have to work hard to stand out from the crowd, and two obvious areas to promote are allowing customers generous access to data and keeping prices low. Belong Mobile have entered the market aiming to be competitive on both fronts.

Belong launched in October 2017 as a MVNO using the Telstra network. They had offered fixed broadband services for 4 years prior to the mobile launch. The Belong marketing concept mostly centres around the idea of “fair” treatment of data – whatever you pay for is yours. That strategy is reflected in two main points of difference from other telcos – firstly, the “data vault” which holds any unused data for as long as the account is active; and data gifting, which allows Belong customers to share data between themselves.

It’s a great incentive for people whose data use fluctuates, or who like the idea of storing data for a rainy day. It’s also a clever strategy on Belong’s part to discourage customers from leaving – with a vault full of data, why would you? Virgin were the only other company offering data rollover and gifting on a post-paid plan, but Optus are closing the brand down.  That means that Belong will have even more to offer customers who like to keep what they pay for.

With Belong Mobile, if you have more than 1GB in your account and you want to share it, you can. You simply log into your account, choose who you would like to gift the data to and how much, and press send. You’ll both get a notification with full details of the transfer once it’s complete.

You can gift as much as you like, in 1GB increments, to any Belong customer. And in accordance with Belong’s policy that any data you get is yours, any data that is gifted will go into their data vault along with their regular data, to be rolled over for as long as their account is active and paid on time.

You can’t gift data to someone who isn’t a Belong customer, if you don’t have enough to meet the 1GB minimum, or if you have an amount owing on your account 10 days after the monthly payment due date. Once your account is paid up you can go right back to gifting. You can check how much data you have given or received in your Service History, found in the “Manage” section of the website.

Why it’s Worth It

Data gifting is one way that a company can reward customers who sign up friends and family. It’s great for people who use a lot of data to benefit from people who don’t need all of theirs. People can pool data – for example, a couple who wants to be able to stream a movie or two while on holiday could save their data and gift it to one account.

It’s hard to know exactly how much data you really need, and as the price point on most phone plans changes based on data allocation, people could be spending more than they need to in order to stop themselves running out of data. Under Belong Mobile’s system, customers only need a little bit more than their normal usage to save up for times where their data needs are unusually high. And if they miscalculate (and know a generous person with spare data) they can get a top up to get them through the billing cycle without paying a cent.

The latest offering for mobile customers is unlimited data, and on the surface, it’s about the only offer that beats Belong’s data rollover option. Whether it really is better value than Belong’s rollover and data gifting options is up for debate.

Optus experimented with an unlimited data plan, offering it to selected customers on a trial period before withdrawing it. Vodaphone and Telstra countered with their own “unlimited” plans, offering a limited amount of data at full speed, with unlimited data at a drastically reduced speed once the cap is reached.

TPG’s unlimited plans work off a similar principle (and will cost next to nothing while they rollout their infrastructure) but the TPG data allocation at full speed is 1 GB per day, with the full speed allowance renewed each day instead of at the end of the billing period.

The Option That’s Right For You

If you use a lot of data, you might like the idea of an unlimited plan. However, bear in mind that while data is theoretically unlimited, once you have reached your allocated amount of full-speed data your internet access will be painfully slow.

If you take the slowed-down data out of consideration (which most people would find only suitable for basic functions like checking social media and getting emails), you’re much better off on a high data plan that has a cheaper monthly cost. The unlimited plans are only worth the extra money if you use the slowed-down data regularly, which most people realistically will find it hard to get the full value from.

Belong offers competitively priced plans with data that is yours to keep and use however you want. The freedom to store up data and to give and receive it when necessary will be more valuable for most customers than painfully slow internet once a cap is reached. Belong continue to rise in popularity, and as their customer base increases, hopefully your chances of getting some gifted data would go up too.