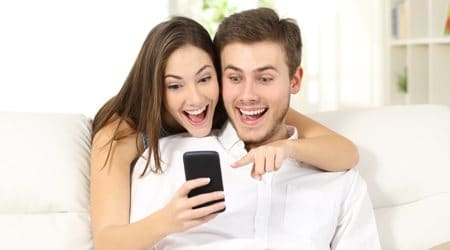 In Kogan Mobile’s, one of Australia’s fastest growing prepaid plan providers, most recent 6 monthly financial report, it was revealed that the company had broken the $1 million sales for the first time. This result was a great surprise for the online business which had not expected sales to exceed $600,000 in that period. It reported gross sales of AU$1.1 million in just 6 months which was not far off their hoped 12-month target of AU$1.4 million. Kogan said that this million-dollar sales figure is due to the business relationship it had set up with Vodafone.

Kogan has become well-known as an online retailer but for some time it had offered a mobile service through an arrangement with Telstra, but that didn’t last long. It was re-activated in October 2015 using the Vodafone network and through this relationship it has started to grow its customer base.

Kogan Mobile has kept as up-to-date with its network as Vodafone and it currently uses a blend of coverage for its calls, messaging and data including which are 4G (LTE), 3G+ and 3G. 4G is the 4th generation of technology used by mobile networks and enables faster speeds for internet surfing, video and music streaming, downloading and gaming.

Last year in April, the company issued an announcement to Kogan Mobile subscribers that they were to be given the opportunity to use the 4G network provided by Vodafone Australia. All existing and new customers were moved onto this higher-speed delivery network in June of last year and they were charged no extra for using this service.

The arrangement that Kogan has with the telco is that Vodafone runs the operations leaving Kogan the responsibility for marketing, branding and attracting customers. Kogan’s CEO reported that the mobile division is growing because of the way it promotes and delivers plans to the market.

For the 6 months ending 31st December 2016, Kogan topped $143.9 million in sales, which is $20.6 million on top of predicted sales. This has come from a number of business interests as well as online retail sales which has grown to a customer base of 3.7 million which is an increase of more than 60 percent since 2015. Kogan travel has made a significant contribution at $2.8 million. Additionally, the launch of Dick Smith added revenue of $6.5 million in revenue.

What does Kogan Mobile offer its customers?

It’s a no-frills arrangement for subscribers who have an unlocked phone available. If you don’t have one, you can always try kogan.com online retail store and buy one there.

The smallest prepaid plan is for 30 days and offers:

The larger 30 day prepaid plan costs a little more at $49.90, which comes with unlimited national texts and calls and 12GB of data.

Kogan mobile hasn’t forgotten those customers who may prefer long expiries and it offers a number of options. If you want to get the worry of topping up on a regular basis you can pay $179.90 for a year which includes unlimited national texts and calls as well as a 1GB of data per 30 days. It might be of little use for your iPhone for downloads but for a back-up handset this is a very reasonable deal. They are also great for those who hate receiving bills and prefer to pay upfront and know exactly what they have paid for.

With this sort of positive financial news for Kogan Mobile it means that these independent mobile virtual network operators (MVNOS) are standing out from the other telcos by offering sound no-frills deals that can’t get you into debt and are there when you want to use them.

The more areas of Australia that Vodafone Australia breaks into, the better it is for both smaller MVNOS and users. Vodafone Australia has just announced its expansion into Tasmania which will help a lot for those travelling customers who want to hit the wilderness of Tasmania and are Kogan customers.