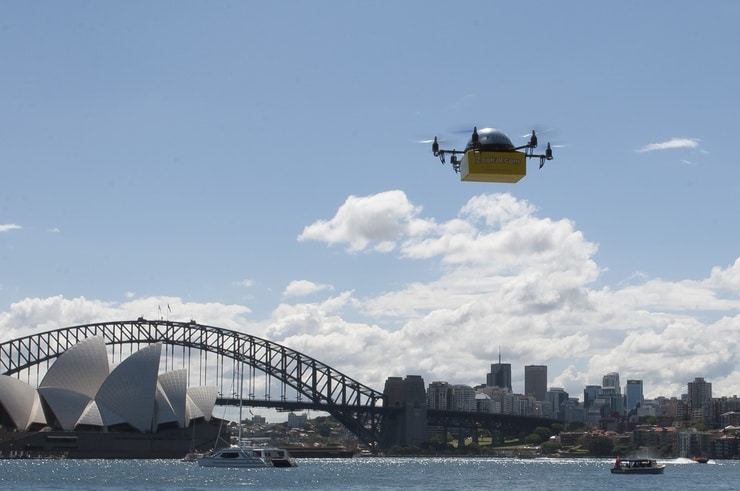 Like many new gadgets, the rich and famous flirt with them first because of their initial high price and novelty value. However, it’s never too long before gadget fanatics of any income earning group start to show an interest and either purchase the device using a credit card, or save enough and buy outright. Drones have pretty much fallen into the latter category. The odd observant bystander might spot one in the distance or jump out the way of an errant one but now they are becoming quite commonplace.

You don’t even have to go online to buy one as Myer’s is selling them at very reasonable prices, starting in the low $200’s with no camera attached. You simply attach your own GoPro and press the record button and off it goes. It’s a little bit more than a toy remote helicopter, plane or sailing yacht as it’s easier to control and the engine can run up to 25 minutes with a reasonable range of at least 3 kilometres. Some of the more expensive models can even get out of sight of the operator. The main use commercially is to send back images, either static or video, to a smart phone. If you buy one with a 12 MP camera the image quality in HD is crystal clear.

New drone users’ rules make them easier to use

Many of the rules for drone use haven’t changed much at all. It’s just the licensing which has become easier, or now non-existent, for drones less than 2kg in weight, unless used for commercial purposes. Drones less than 25kg can now be flown without the need for a license if they are to be used for sport and recreation or used on private land for spotting, private aerial photos, agricultural operations and for communicating.

It will be simpler for drone owners to accumulate a bit of cash from selling images and video footage that their drones have taken while out and about.

Where Telstra fits in

Up to now drones are only permitted to be flown in the sight of the operator, even if they have the capability to go further. Telstra is trying to get this law deregulated as it believes it can help to control where the remote controlled device can go. Telstra has 8,500 mobile towers which it believes could remotely warn drones if they are entering a danger zone like a flight path in real-time. So far, amendments by the aviation regulator made recently for drone operators no longer ask commercial drone operators to be licensed if the device weighs two kilos or less. Virgin Australia and Qantas are not that happy about these changes as they believe the presence of drones and their use by novice operators could well have an impact on airspace and passenger safety.

What does Telstra think?

Telstra, being a telecommunications giant, homes in on the act if anything new technologically arises, especially if it believes the company and its customers could benefit in some way. It is suggesting that its mobile towers can be used to communicate effectively with drones through smart technology and management systems that monitor air traffic.

According to Telstra, there should be no danger when drones are directed out of the line of sight of the operator. It is now saying that more discussion is needed and the select committee should initiate a forum involving the various stakeholders, including the aviation authority, commercial and personal users and suppliers of the drones. Up to now they have quietly been used to monitor volatile situations in infrastructure if the safety at a site could be an issue.

Goldman Sachs has revealed that the drone industry could be worth 200 billion dollars in sales by 2020. This means it’s not going to be used just as a toy in the future. On the commercial side of things, the pizza chain Dominos will soon be putting drones on trial when they are sent out to deliver pizzas.

Telstra is currently using drones to check on its mobile towers. It has eleven licensed pilots who are operating remotely controlled aircraft throughout five areas across the nation. It is now clambering for nationwide approval to run pilotless drones outside of a pilot’s visual line of sight (BVLOS) so that it will have the ability to check on damage done to mobile towers after a severe weather event or other catastrophe. It also believes that other events like a bush fire or the presence of great white sharks off a busy swimming beach could be monitored more easily if drones had more space to legally operate in.

Australia Post is already experimenting with drone deliveries which it hopes will be continued into 2017, but it believes a slackening off of the BVLOS rules will help it move forwards.

The winners and losers in the drone game – is our privacy at stake?

Amongst other things the new rules regarding drone use if implemented will mean a loosening of the current rules concerning drones being use for commercial purposes but there will still be restrictions. Recreational users are set to gain as long as they follow the rules, so no doubt many more drones will soon be flying around across Australian skies. So far, we have no recourse if our personal privacy is invaded by a drone until someone raises concern and pursues a claim against a drone for breach of privacy.

In 2014, a standing committee for the Commonwealth House of Representatives recommended legislative changes to offset the dangers of drones and their invasion of our privacy. These however have not been as yet considered by the government. At the same time the Australian Law Reform Commission said the country should enforce a “tort of privacy” which would protect people from being intruded by drones. If this was to take place those affected would be allowed to sue anyone who was caught invading their privacy.