Telstra’s Getting Smart on Smart Homes 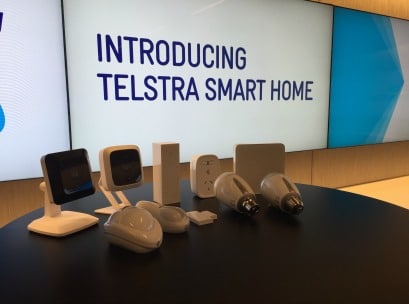 Communication today is rapidly moving beyond just calling and texting and accessing the internet using the data on a smart phone. So called ‘smart homes’ inch closer to reality alongside the smart phone. According to Telstra, in the very near future, we will still have phones and they will be used to communicate with devices and gadgets installed in the home. Busy people, for example, who rush out of their homes forgetting to turn the heating on or air conditioning off (who hasn’t done that) will soon be able to monitor and activate or deactivate these aspects of Australian domestic life, wherever they are as long. All they will need is phone reception, either cellular or wireless, an app from Telstra and some ‘Telstgra Home’ equipment.

Just recently, John Chambers, a Senior  Telstra executive, demonstrated the use of the company’s Smart Home app. With it he can keep an eye on his teenage daughters to make sure they are not opening the back door to let their boyfriends into their rooms at night. Which seems like an oddly invasive and paranoid way to advertise a new technology.

Further, if his son who is aged 19 tries to gain access to his liquor cupboard, Mr. Chambers receives a video notification. He also pointed out other pertinent features of the app, including switching his home’s gas heater on, while he’s still in bed so it’s nice and warm when he gets up. He also demonstrated the use of a more generic ‘smart plug’ for outside (patio) lighting, which, again, using the app, he can now control from anywhere. Soon, said Mr. Chambers, every major appliances in your home will be connected to your phone in this sort of way. The concept is the domestic version of The Internet Of Things, a system under which we begin to connect everything (including physical domestic products) to the internet.

Smart Home Telstra package is on its way

Telstra’s Smart Home package is just one product from a suite the telco is bringing to market, on as it moves  to deliver it’s recently updated brand promise. Telstra want to move away from being a telco and towards being a marketing and tech/IT services company. These Telstra Home devices are, in part, a response to a genuine Australian need. Surveys on this issue have revealed that 80% of Australians fear leaving an appliance switched on when they go out.

Telstra Home will attract a monthly cost of $25 and is likely to be part of a mobile, broadband ‘combo’ announced in the months ahead.

If Telstra doesn’t get enough customers for this mainstream offering, they’ve disclosed a desire to cash in on the disabled and elderly market. Using technology very similar to Telstra Home, family members will be able to keep a track of elderly parents, while they remain at home. It should be possible to track the whereabouts of your grandfater or grandmother as they go about tasks in the home. If you see they have left an appliance on you can send them a reminder to turn it off and if they suffer distress, they can tell you and you can get them help.

For those affected by a disability, Telstra home could be a way to create a more independent lifestyle. Disabled people are, of course, jsut as tech savvy as anyone. They do, however, benefit from the potential to  improve their lives disproportionately through this sort of technology. The sorts of things Telstra has in mind for the 500,000 plus disabled Australians who are spread throughout the country include:

Telstra is not the only company looking for ways to cash in on smart home devices. Device makers are in on the act too. This includes Apple, Samsung, Google and Amazon. Telstra’s Connected Home and more general tech solution business could be worth upwards of US$12 billion in Australia alone. Put in those terms, it’s easy to see why Telstra are leading the field and educating the market.

Telstra expects to target Australians in their own homes

Telstra’s Chambers is not looking for a generic solution for Australians, he said. The suggestion was that tech giants tend to focus on products and solutions which serve a global market and Telstra can do better by focusing their attention on uniquely Australian needs. Additionally, he said, this is just the start; the range will expand to be a ubiquitous, intuitive platform working off a single app, flexible enough to incorporate any new devices purchased from Samsung, Apple or Google.

As a rough guide, Telstra say Australians who are interested in incorporating smart home features into their busy lives should expect price tag in the region of $5,000 price to do it. For this, they could purchase up to 30 different smart devices, for each of which, Telstra will charge $25+ a week Telstra.

As the telecommunications business becomes more competitive in Australia, the telcos have to look for ways of attracting new and retaining existing customers. They want a stable customer base tied in with as many services as possible. Telstra Home is the first foray in to consumer Internet of Things applications from the major Australian telcos. It is clearly a key strategic priority for the company. I have been told, for example, that Telstra do not let MVNOs, smaller phone companies who use their network, sell capacity for Internet Of Things applications such as Telstra Home. Big T wants it all to themselves.

At this stage, the facilities Telstra Home offers are reasonably pedestrian. However, they are well thought through and Telstra’s demonstration will bring the concept and possibilities home to many people who have not yet considered this sort of useful facility. In time, I suspect, we will see a good deal more of this sort of offering from telcos and become more used to sensors in our home appliances + an app to control them.

The internet of things is well explained here : http://www.theinternetofthings.eu/

The potential for the Internet Of Things to positively influence the elderly and disabled is well covered in this article by Forbes : https://www.forbes.com/sites/quora/2016/04/07/how-technology-will-change-the-lives-of-people-with-disabilities