The upfront postpaid plans come with some great benefits, and the new inclusions aren’t bad either. We’ll tell you all about it in this article.

Less than 2 years ago, Telstra revamped their postpaid plans, scrapping contracts and replacing them with month-to-month plans. That revamp came with a lot of benefits – it allowed customers bring their own phones and plug in a Telstra SIM, and simplified Telstra’s offers significantly.

Fast forward to 2021, and Telstra are revamping their postpaid lineup once again. This time, Telstra will replace those plans with upfront postpaid plans.

Upfront postpaid plans are also SIM only, so you can still bring your own phone.

Here’s a look at how the new upfront postpaid plans differ from Telstra’s current month-to-month plans: 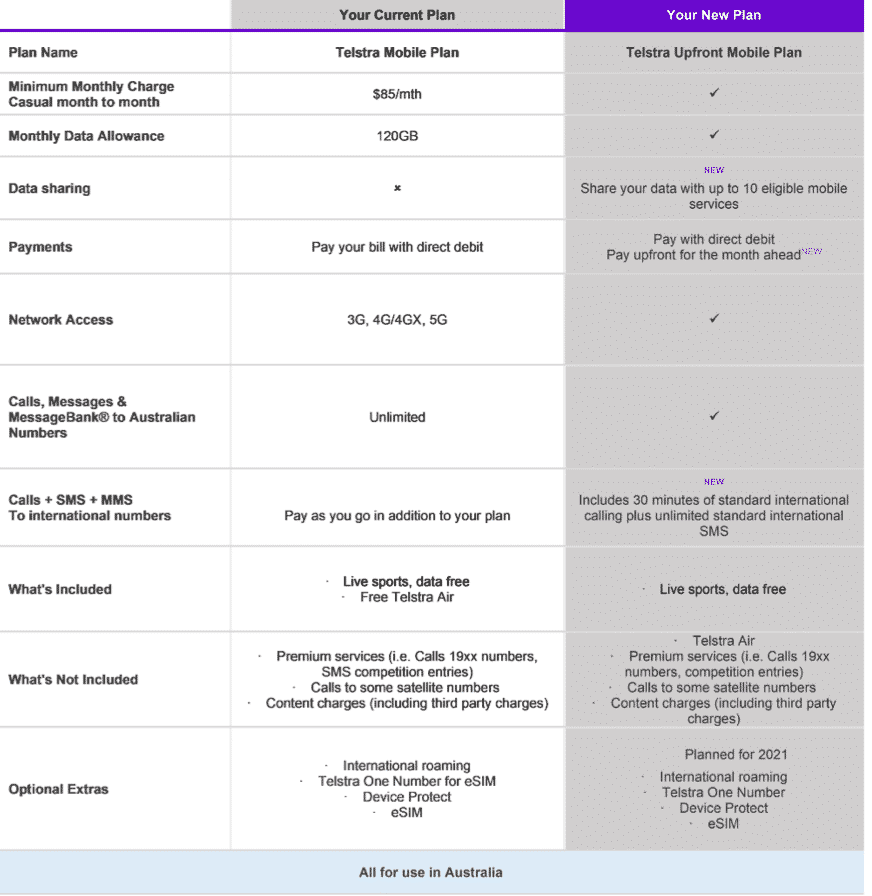 The new upfront plans are already live for new customers, and current customers will be switched over in the coming weeks/months. And if you don’t want an upfront postpaid plan, you can easily switch to another telco.

Signing up for the new upfront plans is very easy, compared to current plans. The current process can take up to 2 hours on a Saturday morning if you want to get a phone on a postpaid contract (I know, I’ve done it). The new upfront plans, on the other hand, won’t require a credit check, making them much faster to sign up for.

Why the change to upfront postpaid plans?

The postpaid market has become very competitive over the years, mostly due to the outright handset market, where you can pay upfront for your device and add any SIM of your choice.

Yes, Telstra’s current postpaid plans are SIM only, so you can bring your own phone. They are also no lock-in plans, so you can leave whenever you want. However, with so many other companies like JB Hi Fi, Harvey Normans, and even phone manufacturers like Apple and Samsung selling handsets outright direct-to-consumer, there’s no telling which telco SIM that consumer will choose.

In fact, retailers like JB Hi Fi and Harvey Norman try to steer customers toward the telco that gives the most commission when a device is purchased outright, rather than the telco with the best phone plans. This makes the market even more competitive for brands like Telstra.

In fact, in the first half of last year, almost 65 percent of all Telstra’s new postpaid customers came from Belong, its MVNO. This shows the difficulty the telco has had in the postpaid market, mostly due to how competitive the device outright payment market has become with all major telcos offering SIM only plans.

Will Telstra’s new upfront postpaid lineup solve their subscription woes? That’s yet to be determined. After all, the telco revamped their postpaid plans less than two years ago, and now has to do it all over again.

But in the coming months, Telstra plan to reassure consumers that their upfront postpaid plans are competitive. For instance, we expect to see price match offers at some point, in an effort to lure customers in.

At the same time, being competitive and giving price match offers doesn’t mean Telstra will take a loss. With their upfront postpaid plans, customers will likely forget about their subscriptions because they are automatic and there are no bills. This is much like your Netflix subscription, where you just keep streaming without ever stopping to think about the cost, because you don’t have to actually check the bill and pay it manually. With such a set up, your likelihood of remaining a Telstra customer for the long term increases.