Telstra Teams up With Damon Motorcycles for eSIM Connected Motorbike 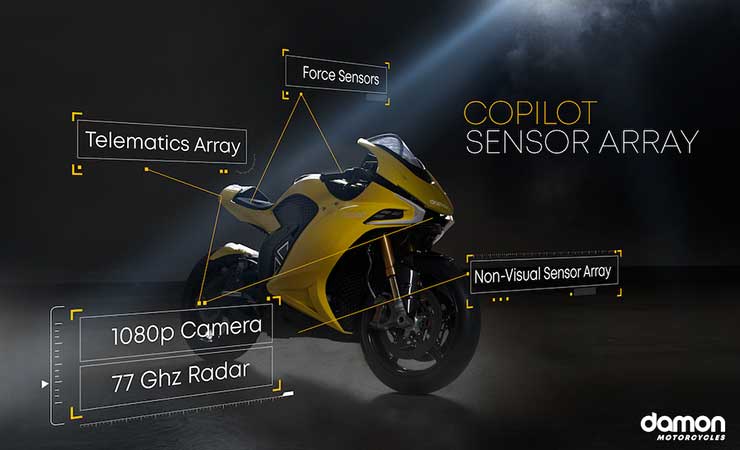 Electric motorbike gets smart, thanks to eSIM technology

The Consumer Electronic Show (CES) 2020 was packed with some amazing technology newbies. One newsworthy tech was Damon Motorcycles’ Hypersport electric bike, which we really should refer to as a smart bike. The Hypersport won the CES 2020 award for best innovation.

The Hypersport can detect hazards around you and warn you about them. It can transform its handle bars, pedals, windshield and seats to fit the rider. It has a lot more hazard detection and avoidance perks, and it stays connected to its owner at all times, thanks to its eSIM technology and Telstra, which connects it to 4G mobile networks.

The Hypersport is an example of just how much eSIM technology means to the future of connectivity, as devices large and small grow dependent on wireless networks.

The eSIM works pretty much like a SIM card, but it’s embedded inside the device itself. This means the device can connect to any mobile network without the need to physically switch SIMs, because the eSIM is already built in. This also means the device won’t be locked to just one network – it can use any.

eSIM technology has been around for a while – Telstra has supported it in Australia since 2017. But they mostly end up in handheld devices and wearables. For example, Telstra’s eSIM support for Microsoft Windows 10 devices, and the iPhone 11.

Everything you need to know about eSIMs. Source

At CES 2020, Damon Motorcycles claimed the Hypersport is the world’s “smartest, safest, and most powerful electric motorcycle”. The bike maxes out at 200mph and has a range of 200 miles city riding on full charge, which takes less than 3 hours.

But the Hypersport’s selling point is how smart it is – its rider adaptation, its hazard detection and avoidance, and its connectivity to its owner. These detection perks are powered by Blackberry’s QNX technology, and connectivity is all due to its eSIM technology and partnership with Telstra.

eSIM technology connects the Hypersport to a 4G mobile network, and data will be included with the bike. How does this help anyone? Well, it boosts the bikes smartness even more. The eSIM connectivity means the bike will always be connected to its owner or rider, sending alerts to your smartphone if anything ever happens to it – for instance, if someone bumps into your bike, scratches it, or steals it, you’ll immediately get notified.

We’re already in a connected world, but we’re going to get even more connected. Where eSIMs were once typically a wearable technology, the Damon Hypersport shows us how it can apply to larger machines, like automobiles and industrial equipment.

This leads us to the Internet of Things (IoT).

IoT technology aims to connect us to our devices and our devices to eachother and even others devices. Think about it – your car being smart enough to advice you to take another route to avoid traffic, thanks to its connection to a network powered by your city to broadcast traffic information over the Internet. Or maybe your thermostat shutting off after you forgot to do so, or your lights doing the same, helping you conserve energy.

These smart decisions being performed by appliances, devices, and machinery become possible with network connectivity. Your smart home, smart cities,  etc., are all examples of the IoT.

To enable and maintain this network connectivity, however, mobile networks are ideal because they have to be wireless. The eSIM does this perfectly, being able to fit into virtually any small or large device and machinery, indoor or outdoor, from your smartphone to a tractor trailer and even larger industrial machines.

With the Damon Hypersport exhibiting just how that could work, the eSIM looks even more promising than ever.

Telstra’s partnership with Damon Motorcycles enables the electric bike’s 4G connectivity via eSIM. The embedded SIM makes the bike even smarter, keeping it connected to its rider at all times. This shows us just how significant eSIM technology is to future gadgets and machinery as the IoT becomes a more widespread technology. From smart homes to smart cities, the eSIM is applicable – the technology brings connectivity to anything, regardless of size and location.