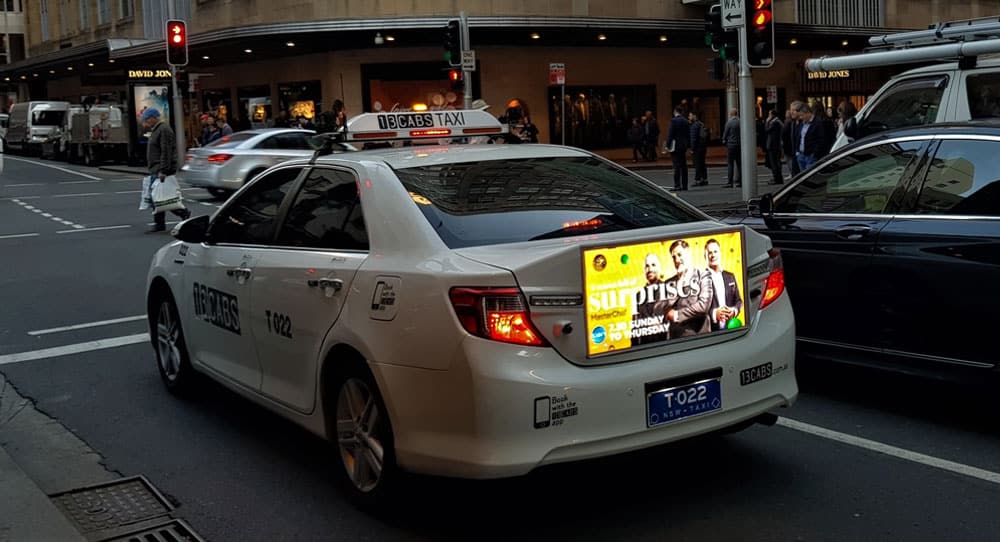 A partnership between Telstra and the domestic startup, Cab Digital Media, has given Australians the world’s first real-time advertising solution– TaxiLive, an automobile advertising concept. The advertising platform was launched in March 2018 and consists of a GPS enabled 32-inch custom designed digital screen located at the vehicle’s rear. It’s connected to the Telstra network and remotely controlled via Telstra’s M2M Control Centre platform. Advertising messages will be targeted based on the vehicle’s location, the time of day, and/or the weather – it is essentially a mobile, digital billboard on taxis.

The implications of such an idea are vast. Having a digital advertising platform that has the ability to display promotional messages will certainly be a favorite in marketing circles. The benefits go beyond that, however, as individual commuters could find an advantage in such a platform’s ability to determine traffic conditions given its target mechanisms.

However, whenever new advertising ideas surface, there exists the fear of over-exposure. Consumers already pay less and less attention to advertising messages, with 69% of consumers lacking any trust at all for such messages, according to one survey.

These notions make the launch of TaxiLive one to watch. An in depth discussion of its origins, overall concept, and more, follows.

Najeeb Aftab, co-founder and head of sales and partnerships of Cab Digital Media, credits the origins of TaxiLive to a traffic-jammed day on the Sydney Harbour Bridge. He describes a day, three years ago, when Shafiq Khan and Sajid Khan, both veterans of the taxi industry, experienced congestion on the bridge due to an accident.

According to Aftab, Shafiq Khan and Sajid Khan, now the Chief Technical Officer of Cab Digital, envisioned a way through which motorists could be warned of accidents on particular roadways, and advised to wake alternate routes. Aftab describes TaxiLive as a product of that thought, born as a result of that immediate experience.

TaxiLive’s first year consisted of a search for a supplier. This process presented unforeseen complications, enough to cast doubt on the vision of the company itself. There was a realization that in order to jump start the business, more time and resources were required — both of which were lacking. It was during these discouraging times that Telstra came into the picture.

Aftab credits Telstra for giving life to TaxiLive. Telstra’s willingness to share their expertise regarding mobile network-based platforms, along with their help in co-developing TaxiLive, turned the vision into a reality.

The transformation of the initial idea into today’s TaxiLive

As mentioned, the initial idea behind TaxiLive was to create a solution to traffic issues such as accidents and other traffic and/or weather updates. However, the real value of the idea soon became apparent. The system proposed was found to be quite advantageous in the advertising market, specifically targeting customers by their location, time of the day and even weather.

Cab Digital plans to share advertising income with taxi owners and operators, based on their performance, and will pay them for installing the screens. The company will offer drivers incentives to keep their vehicles clean, maintain good reviews, and spend time on the road. These factors will make TaxiLive more attractive as the image improves.

Although digital advertising on vehicles is not entirely a new idea, TaxiLive is unique in the space. Where London and New York taxis are fitted with boxes on their rooftop dislaying advertisements, TaxiLive installs a fully customized boot on the cab to attract the attention of passing motorists. Advertisements displayed on rooftops are typically visible to pedestrians on sidewalks; advertisments displayed on the rear of the vehicle, however, can’t be missed by motorists behind that particular vehicle.

What’s next for Cab Digital Media?

TaxiLive is a great example of how technology and the IoT (Internet of Things) continue to solve problems with digitized solutions, creating smarter cities and communities. Cab Digital is excited about introducing this particular solution, and doing so by entering the Sydney market as a first mover.

In the future, Cab Digital Media aims to partner with roadside authorities to share the GPS data generated from each TaxiLive unit to contribute to future transport, infrastructure and congestion reduction initiatives. Several plans focus on finding ways to analyze data to solve problems such as reducing taxi waste in over-populated and ensuring taxi availability in under-serviced areas. This will be especially helpful in areas such as hospitals, schools, and locations with higher proportions of elderly and disabled people.

Further, according to rumors, Telstra is working closely with JCDecaux on a $500 million contract that includes the provision of bus stations, billboards, free Wi-Fi, as well as 1,800 sites across the company’s network, to include WiFi capabilities to TaxiLive digital advertising screens.

Final Word — Should over-exposure be of any concern?

TaxiLive presents a great idea, one that will certainly attract marketers. However, there should be some concern whenever new advertising platforms are introduced. What makes TaxiLive different, though, is its ability to be helpful to consumers through its traffic problem solving capabilities. Perhaps this can change the perception of TaxiLive, making it more than an advertising platform that simply bombards consumers with messages. With the backing of the ever dominant Telstra, TaxiLive is likely to be a success.