Which Phone is Best? Easy guide to Android, Apple iOS and Windows 8

Android and iOS have different features. We explain how they’re different, here.

Android vs iOS vs Windows Phone 8

This article is designed to provide you with the pros and cons of each of the 3 major Operating Systems. Your final choice is always going to be a deeply personal one. Our goal is to make it a little easier for you to choose the right one for you.

As you will know if you have read our other articles, we believe buying your phone outright and adding a SIM to it is by far the cheapest way to go about running your Android or iOS phone.

And if you’d like to know more about why we recommend a SIM Only deal for your Android or Apple phone, check out our article on how to save 30% on your phone bills.

A quick summary of the differences between the major Operating Systems

Before we get in to the detail, here’s a quick summary.

The image below is what you’ll see most often if you choose ( in order ) Android / iOS / Windows Phone 8. 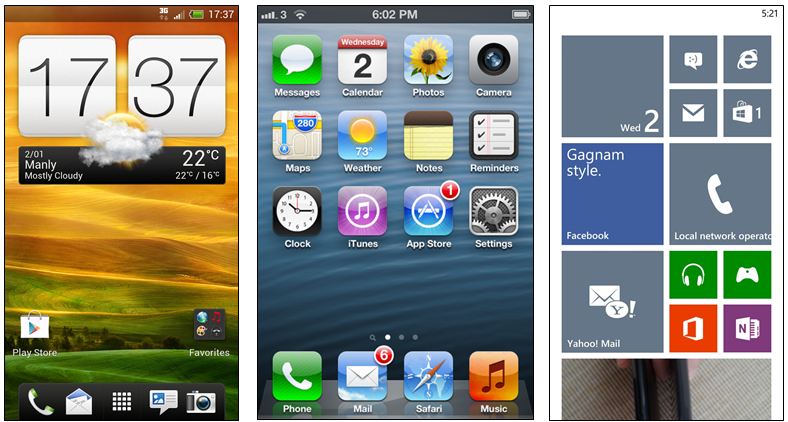 The homepages of the different handset options you have.

1. The Android Homepage – This one has the HTC Sense User Interface Overlay
2. The iOS Homepage – Classic Icon Griid
3. The WIndows Phone 8 Homepage – Tiles are updated with behind the scenes info

The 3 most populat phone Operating Systems have been compared, below, on their key attributes :

Of course, the other key aspect of a mobile phone Operating system is the apps available on it. This is covered briefly, below. However, it’s so important, we’ve considered app stores independently, too, in this article : Android vs IOS vs Windows Phone 8 App Stores.

Android is the world’s most popular mobile operating system platform and it’s my personal favorite. 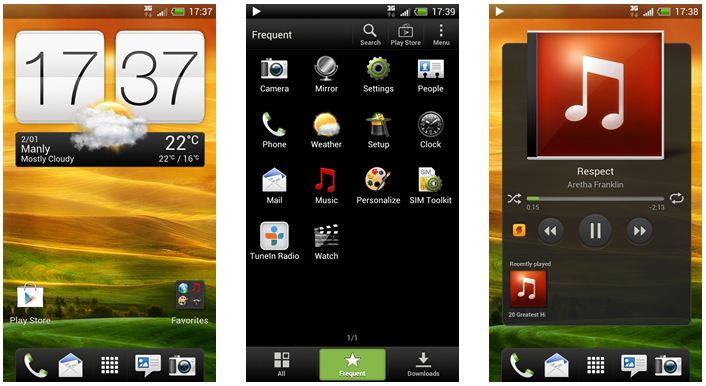 Here’s how Android looks and feels.

1. Personalised HTC Android with Weather Widget
2. HTC have a ‘Sense’ User Interface – inconsistent with other Androids
3. A Music Widget – music straight from homepage – no ‘app’ opened

The cons of Android are the other side of the flexibility / configurability coin.

Android products might appeal to the more technically capable, people prepared to invest in considering their product, who like a particular device form factor and / or who already uses a lot of Google’s online product suite.

iOS is the Apple Operating System. 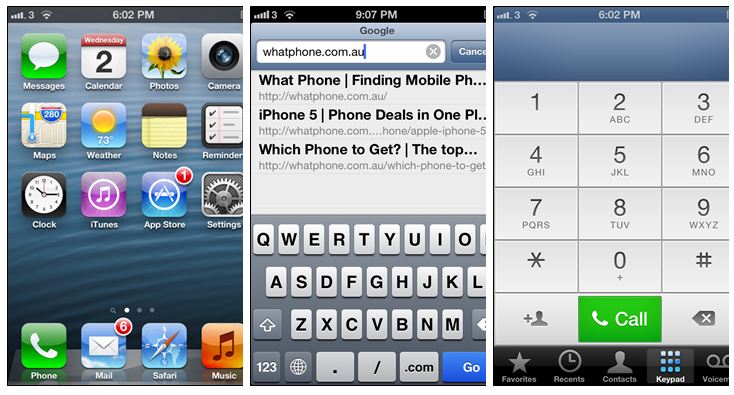 Here’s how iOS looks and feels.

1. The iOS Homepage has icons, no widgets and limited personalisation
2. iOS is more reliable. Simple tasks are done well – here, browsing
3. iOS is simple. You’ll be able to pick it up and use it immediately.

Apple products can appeal to people new to smart mobile phones, who love the Apple brand and have experience of it and who know how useful apps can be.

The Windows Phone 8 mobile Operating System falls somewhere between Android and Apple. It’s not nearly as popular, especially now. However, the platform is gaining momentum. It has some features you won’t find in either Android or iOS. Windows 8 is a credible product and, in the opinion of Whatphone, you could do a lot worse than consider it.

Range of devices is neither a Pro or a Con at this stage for Windows 8 devices. There are only a small number of products in the Australian market but it’s growing all the time.

The Windows Phone 8 range is already larger than Apple’s portfolio. It should also be mentioned that each of these products is styled in a unique way with a variety of full body colours. There is more flexibility in pricing options too. Not all Windows Phone 8 devices are at the top end of the pricing bracket.

Additionally, some Windows 8 products have other innovative features, this time related to the hardware they provide. A good example is wireless charging. 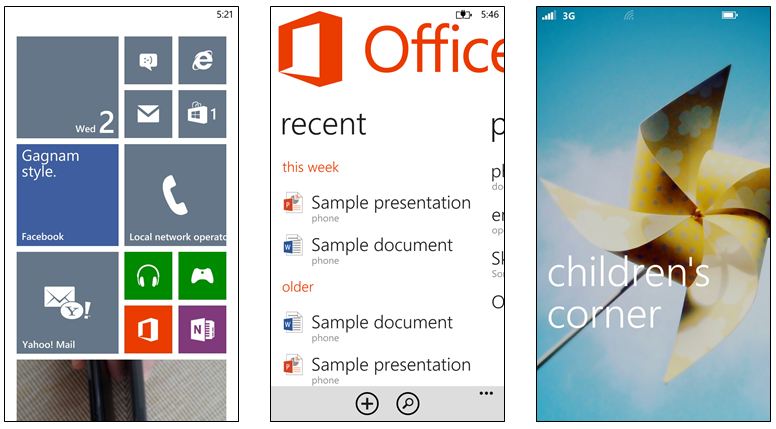 Windows Phone 8 might appeal to business people, those who put family first and everyone who wants to keep it simple.

Summing up the handheld OS comparison

What used to be Android vs iOS is now Android vs iOS vs Windows Phone 8. As with all these things, OS is a very personal choice. However, there are clear differences between them. Apple’s the safe bet. Android is for people who like to play with their phone settings to get it exactly the way they want. Windows Phone 8 falls somewhere in between.

Some parting thoughts designed to make you feel a bit more reassured about this : This is probably not a decision to worry about. There is no bad choice here. As you can see from the above, each one has its strengths and weaknesses. One of the funny things about operating systems is that, the first time you use it, you complain it’s hard. Then you get so used to whatever you have that you can’t stand to leave it. Rest assured, in a few months post buying your phone, you’ll feel that way about whichever one you choose.