Yomojo is an Australian MVNO,  Prepaid SIM Provider (that’s a small phone company which resells another phone company’s network) that provides prepaid plans. They’ve been around for a few years now, offering a broad range of competitive plans which, following an early 2018 update, now includes a ‘Kids Plan‘ option.

Yomojo used to be Yatango but they re-branded after a financial restructure a couple of years ago.

If I want to move to Yomojo and keep my phone number, can I do that?

Yes you can. We have more information about this here.

Keeping your phone number is a simple process. When you checkout on the Yomojo site, they’ll ask you if you want to keep the phone number you have or move to a new one.

What is Yomojo’s ‘Family’ focus about?

Yomojo is the only Australian phone company specifically targeting families as the core group of people it’s trying to service.  There are 2 key features to the benefits families will get from Yomojo.

We have more information on both of these features in the article below.

We also have a dedicated page to Family Plans – which Yomojo features prominently on. And we have a separate article about shared data plans.

What alternatives are there to Yomojo ?

There are a number of alternatives available for you on the Optus 4G network. Options include

If you dislike the coverage characteristics of Optus’s network service (i.e. the network that each of these rivals to Yomojo uses) you can also try other smaller phone companies which use other networks.

Yomojo Won The WhatPhone ‘Best for Family Plans’ Award  – why is that?

There are real dangers for children online and yet, they are being given phones at younger and younger ages. Family plans and kids plans help with the problems families need to solve these days – managing mobile data allowances across multiple accounts. Yomojo won this award because they are targeting this group, specifically.

Yomojo’s clever software ensures young people cannot see some of the darker areas of the internet. Additionally, their online dashboard and app provides self service facilities across your account so you can see who in the family has what amount of data left.

Unfortunately, Yomojo does not yet offer a facility to split a single, large data allowance between users or to ‘gift’ data as Belong Mobile’s plans allow.

The Yomojo basic unlimited texts and calling plan starts at one of the lowest price points per month that we’ve seen, with additional fees added on top depending on your mobile data usage requirements. Yomojo has been around for a while now and has matured into a competent if still not a widely known brand. Yomojo added a Self Service app to their Self Service facilities back in 2016. The company tightened its range in early 2018, removing postpaid options and PAYG plans from their range. Their plans are now more mainstream, so easier to compare alongside alternatives.

Out of bundle data charging:

You’ve got to be careful on Yomojo plans. We advise that you use their self service app to track your data usage. If you exceed your data allocation and still have service credit on your account, you will be charged more than $50 per GB for the data you buy. On the Yomojo site, you will see a link to ‘reserve credit rates’ and this plan feature is outlined in there (as well as on the CIS – Customer Information Statement). This $50 / GB is an outdated and now uncommon way of charging customers for extra data they need. Usually, when you exceed your plan’s data allocation, you’ll be charged $10 per GB. To be fair, Yomojo does offer the option of adding a GB of data to your plan yourself – for which you will pay only $11 for the first GB and $10 for the second. The problem is that you have to know you need it before you buy it – which is why we’re recommending you use your Self Service app to track it. The $10 / GB scheme usually works without you having to remember.

We have shown Yomojo’s plans above, on this page. We have also highlighted the best of competitor’s plans. If you’d like to compare the full range we offer, you can see the full range of plans on our Prepaid or SIM Only plan pages. However, there is one phone company which is typically compared to Yomojo – Amaysim. We’ve done that analysis for you, below.

Here are the key findings for both Amaysim and Yomojo services & coverage. Picking between the two companies is not easy. They use the same network, they have very similar inclusions in their plans, at very similar price points.  Ultimately, whether you choose Amaysim or Yomojo will come down to your specific requirements. Here’s what we think you should bear in mind: 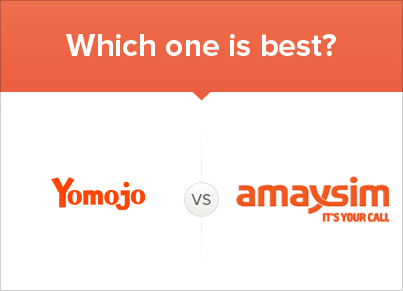 Amaysim are the 4th biggest phone company in Australia with over 1m customers. They consistently have one of the highest customer satisfaction ratings in the industry and have prepaid (28 day expiry) plan range – just select the option you want in their checkout. With Amaysim, you’ll get:

You can find out more about this company in our Amaysim review.

It’s not hard to see why Yomojo has invested so heavily in their Family focus. Amaysim, their largest direct competitor, is a better known brand with a reputation for good customer service. Rates and inclusions in plans change, promotions come and go, so compare the two to see who has the best deal at the moment.

But also think about Yomojo’s Family Inclusions. If you have multiple SIMs in your family, those discounts and the way Yomojo helps you manage your spend across those SIMs are some things other telcos might very well like to emulate.