Who are Belong Mobile?

Belong Mobile are a Telstra Mobile Network reseller. They’re actually a part of the Telstra company. Their job is to sweep up the growing number of people who are leaving Telstra, Optus and Vodafone for better value plans.

Are Belong’s plans prepaid or postpaid?

Belong’s plans are postpaid SIM Only. You can compare them with our full range of SIM Only plans or prepaid plans.

If you’re not sure of the difference, read our article SIM Only vs prepaid vs month to month.

How does the voice aspect of Belong’s service work? (How do I get voice in my plan?)

Belong’s plans come with data as their core component, in recognition of the fact that an increasing number of people don’t make phone calls anymore (see our article below for more details on that.)

They have 2 phone plans (SIM Only plans) plans with differing quantities of included data.

Customers can add a $5 per month charge to their own account, on the Small and Medium plans, which will give them unlimited international calls to selected countries.

International voice call packs can be added and removed, each month, using their Self Service App, if your needs change as time goes on.

If I pay the $5 per month for International Calls with Belong Mobile – where will I be able to call for free?

The answer to this question is not easy to find out on the Belong Mobile site so we have cut and pasted the answer here:

Will Belong Mobile have a Self Service App which lets me manage my service with them?

Yes, Belong have a Self Service app available for users from the launch of their service.

The app allows you to buy more data (Belong do not automatically add data when you reach your limit) and move up / down plans (from the start of the following month, 24 hours notice required.)

You can also ‘gift data’ to someone else with a Belong account.

Our own survey reveals that people who use the self service app to manage their plan are more satisfied with their phone company than those who do not. I’ve used Belong’s self service facilities for a long time and I can tell you theirs is one of the best apps out there (although it can be slow to use).

Belong use the Telstra Mobile Network. Is that the full Telstra Network? If not, what coverage will they have?

What data speeds can I expect from Belong Mobile?

The short answer to this is that you can expect the same data speeds you’ll get on other networks – mostly.

What’s not included in their voice packs?

When they launched, Belong offered an International calls ‘bolt on’ – which is still available for their small and regular plans.

(i.e. if I take my phone with a Belong SIM in it overseas – say to Bali or France – will I be able to make calls ?)

Belong do not currently offer any roaming facilities.

In my view, the best feature of Belong’s phone plans is ‘Data Bank‘.

What Australians want from their phone company most is fairness and, in my view, the way Belong treat data is the fairest way available. It would be nice if every telco did it.

Belong’s plans are exceptionally good value, use the Telstra Mobile Network and, importantly, include a ‘fair’ way of dealing with data.

In response to it’s share price decline (see below for the reasons that has happened ), Telstra released a new Mobile Phone Plan brand – Belong Mobile. Belong’s plans are exceptionally good value, use the Telstra Mobile Network, include a ‘fair’ way of dealing with data and recognize that the way we’re using our phones has changed. Their data inclusions are some of the best available at the price point.

Let’s start by looking at the average Australian mobile phone data requirements, using the results from our late 2018 WhatPhone survey. 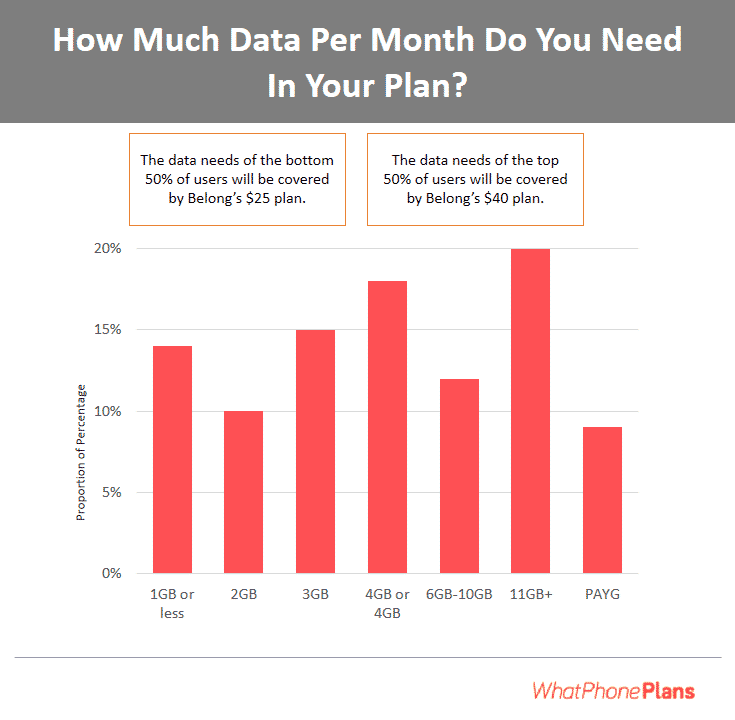 Reviewing Belong Mobile’s plans show that they have data allocations to cover a broad range of needs. Source : WhatPhone Survey

You can see from this chart (above) that people’s data usage varies enormously. The type of phone you have, how new it is, whether it’s 4G or not, whether it’s an iPhone and how big the screen all influence the data requirements people have as much as their personal preferences do.

Belong’s plans cover everyone on the chart offering the right amount of data with a very small plan range.

See below for a comparison between Belong and other’s mobile plans.

Struggling to figure out what you need data wise ? Read our article : How can I work out how much data I need in a plan? 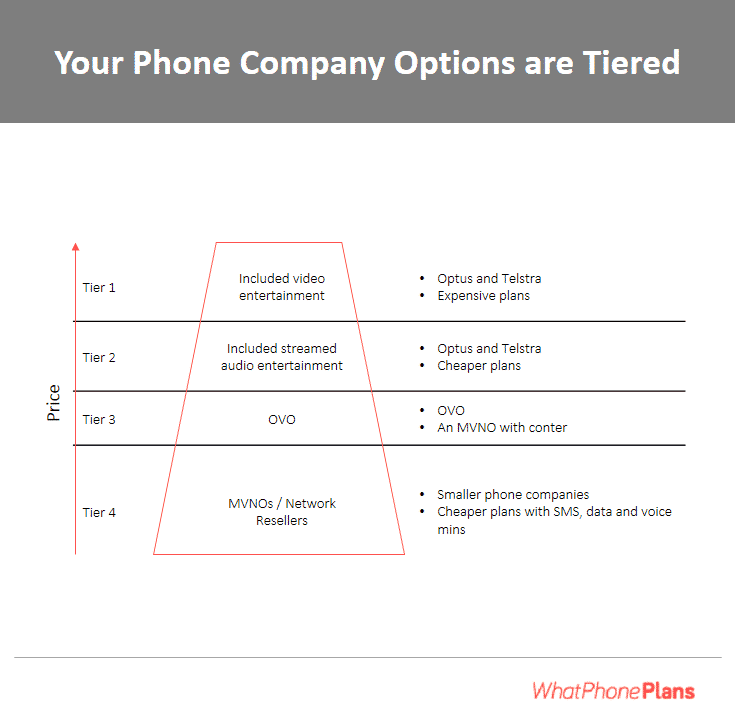 Belong’s plans are great. Our guess is that Belong’s new plans will affect the entire industry. Literally every other phone company is going to have to raise their data allowances in response to this.

Yesterday, it was a tough day to be Telstra. Today, it’s tough to be everyone else. Belong Mobile are the biggest change to Telstra’s set up we’ve seen. Their approach is no nonsense – they quite simply offer more data than anyone else and they do it on the Telstra network.

Belong’s version of Data Rollover is a long overdue feature in Australia. We are likely to see more of these plan components which offer an increased level of fairness when it comes to data and data management. Our view is that includes a focus on the management of data using phone company Self Service apps. 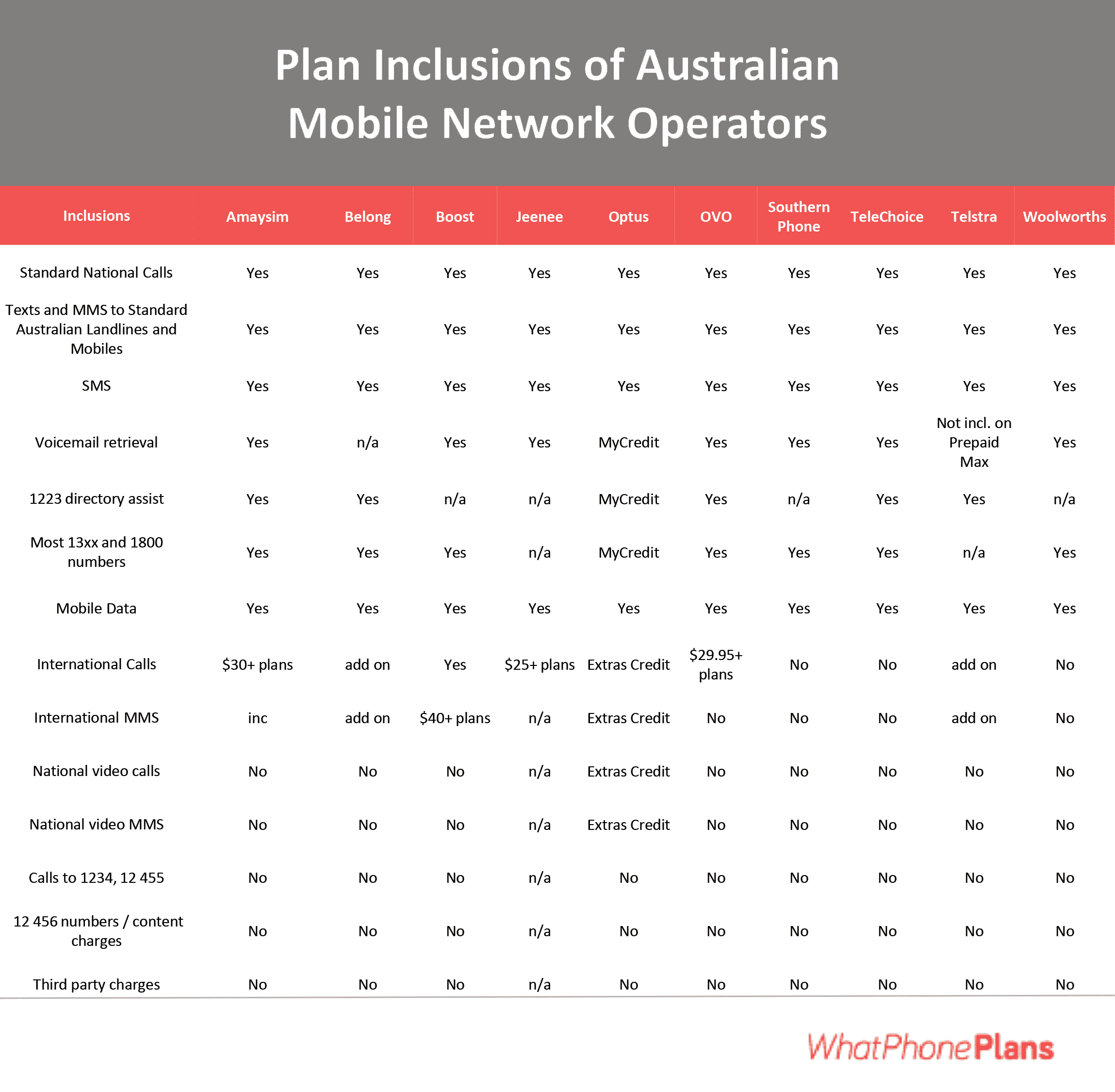 You can compare Belong Mobile’s phone plan inclusions with the best of the rest in this simple chart.