How Do I Know if My Phone is 5G Capable?

5G is gradually taking a foothold in different parts of the world, including the UK, China, and Australia. The three major mobile networks in Australia are progressively rolling out 5G infrastructure in selected parts of the country. Although NBN plans can go as fast as 80-90 Mbps, 5G is expected to eventually hit up to 20GBps.

The advantage of 5G does not just stop at speed. More importantly, 5G will reduce latency, which is the time it takes for a data packet to travel between two points. While the average latency for 4G is about 50 milliseconds, 5G has the potential to whittle this down to 1millesecond. The rule of thumb is that the lower the latency, the better the user experience.

Low latency facilitates the unlocking of massive IoT developments – the potential for Big Data companies and heavy industry to invent, innovate, and operate processes on a truly global scale and in real-time. Network carriers that fail to surpass this challenge could eventually become extinct.

There aren’t many 5G-enabled phones in the market yet

There aren’t many phones in the market today that support 5G technology, despite the continuous mass-scale rollout of 5G infrastructure. It will take a long time before we can genuinely exploit the potentials of the new mobile technology that is the subject of many debates. That being said, most major phone manufacturers like Samsung and Huawei already have 5G-enabled flagship phones.

How to determine if a phone is 5G-enabled

We’ve put together a few tips on how to know if your smartphone is 5G capable.

Most 5G enabled phones come with a 5G inscription on their backs. src

One of the easiest ways to know if your phone is 5G capable is to look for a 5G logo at the back of the phone. It’s important to note that the more recently released flagships for 2020 may no longer carry the 5G logo on their backs. In that case, you can verify the model of the phone and identify the specs online to know if it is 5G capable.

You can also find out if your smartphone is 5G enabled by downloading the Speed Test app by Ookla on Google Play or Apple Store. After the download, disconnect the WiFi and enable mobile data. If the phone is 5G compatible, you’ll record rapid speeds.

Note that 5G is hardware and not software. Therefore, it cannot be installed through an OTA. However, Motorola does have the Motorola Moto Mods, a 5G accessory that is affixed to the back of the phone to access the 5G frequency. 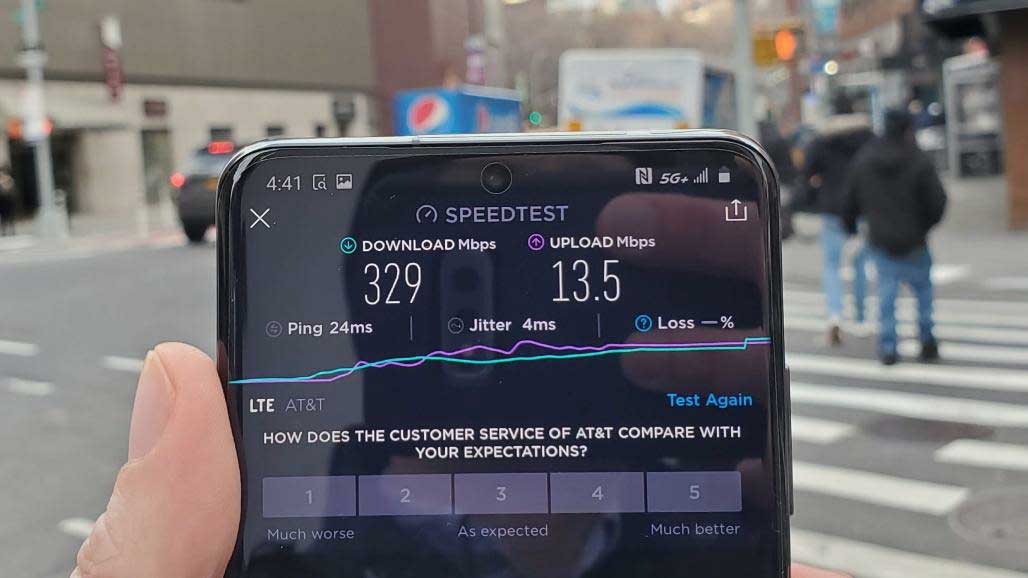 Another factor is that 5G phones are at the highest end of the smartphone market. Most 5G variants of flagship phones are significantly costlier than the standard models. A 5G Samsung S10 is more expensive than the standard version. If you are paying more than a thousand dollars, there’s a chance you’re paying for 5G capabilities.

Gadget enthusiasts do need to be wary of carriers who try to deceive people with a “5G E” logo, which isn’t 5G but an improved version of 4GLTE. Also ensure you live in a location with 5G infrastructure because you can’t test a 5G phone in an area with no 5G connectivity.

Most phones with 5G capability run on Gigabit WiFi but also support the longer-range but slower speed 2.4GHz band. A 5G phone should be able to switch between 4G and 5G.

If you’re still finding it difficult to know if your phone is 5G compatible, look at the wireless connectivity column and search for “WiFi 5” “WiFi 5G”  or “802.11ac.”

Mobile networks in Australia are already beginning to offer affordable 5G phone plans to users as they seek to consolidate their position in a market that is full of potentials.

The competition between 5G and NBN remains to be seen. The rise of 5G mobile network may spell the end for fixed-cable internet. However, chances are 5G won’t be replacing the NBN anytime soon but will work alongside it.