It’s the EOFY (End Of Financial Year) again and time for some accounting paperwork for most of us.

Whether you’re a business or an individual (or indeed both) the start of winter is a useful, and regular time of year to take a moment out. Most users don’t know that their mobile data usage increases over time, as phone screens increase in size and we rely on our smartphones. (Amongst other things.) It will help your finances to spend the 10 minutes it takes to compare the mobile data inclusions you used to need in a phone plan to what you need now.

Our own research  shows that the 2 most commonly purchased price points on WhatPhone are almost always close to the $10 and $30 region. To be exact, 85% of shoppers that come to this site purchase a plan costing $30 or less. 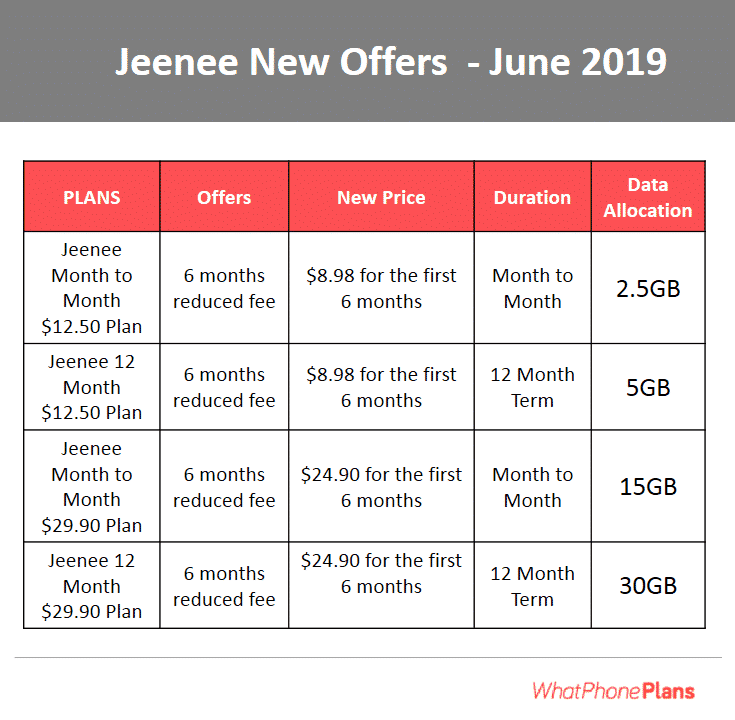 Your current data needs will almost certainly be met with Jeenee’s carefully targeted plans. All plans include unlimited voice and SMS in Australia to Australian numbers.

Why Jeenee are worth a look this EOFY

Moving phone companies is a hassle. Research shows that there needs to be an attention-grabbing deal available before people are encouraged to undertake the pain of moving. Jeenee are offering that with their plans.

Some people like ‘Bells and Whistles‘ in a plan. Optus offer EPL (English Premier League) entertainment options. Telstra have the AFL (Australian Football League), NRL (National Rugby League) and a growing range of sports that other groups of people find interesting. Sometimes the cost of these inclusions is ‘free’ (included in the price of the plan); sometimes it’s not, and you’ll have to pay a little extra.

Jeenee’s plans talk to the bulk of users which have more ‘classic’ requirements from a phone plan. The majority of what people want in a phone plan is still simply voice, SMS and mobile data. Jeenee’s offers target these users and provide deals that are sufficiently strong to encourage people to change their telco.

Get what you need, not what they want to sell you

There’s a great deal of discussion in the news at the moment about 5G in the United Kingdom, Australia and the United States.

However, the reality for most people is that it will be a long time until 5G coverage and services are sophisticated enough to warrant their attention. In the meantime, the EOFY is a time to consider what you used to need in a phone plan, what you need now, and to cut the cost of your phone bill by considering the options available to you.

Jeenee’s plans target and satisfy the most common needs at the most common price points. If you already have enough paperwork to do this year, start comparing with Jeenee.

The ‘Bells and Whistles’ are great, and they’re certainly attractive — hence the reason why major telcos offer such inclusions. However, plans with such heavy inclusions are pricey, and so you’re probably paying for the ‘Bells and Whistles’ inclusions somehow, even when they’re advertised as free. Chances are that you may hardly ever take full advantage of such inclusions, and that you simply talk, text, and browse. This would mean that while reviewing your finances this EOFY, there’s a huge chunk of fat that could be trimmed by considering a lighter, cheaper phone plan.

The best thing about Jeenee: 6 months of reduced fees

Jeenee understands how competitive the Australian telco market has become. With over 40 MVNOs (Mobile Virtual Network Operators) flooding the market, consumers are spoilt for choice when shopping for phone plans. This means a number of different companies offering a number of cheap, competitive deals which tend to get even cheaper as time goes by.

Jeenee’s attempt at competitive deals are sure to bring about some great competition. This is especially the case with its initial 6 months of reduced fees, which slashes up to $5 from its plans. This is actually a huge deal when compared to other providers. For example:

Jeenee Mobile offers some very competitive phone plans which should come in especially handy this EOFY. While reviewing your finances so far, perhaps you realise your phone plan expenses can be a lot less than they are at the moment. Chances are that you really don’t need what your telco has been selling you all this time, and that all you really need are the basics. If that’s the case, Jeenee offer some great options, and their prices are even more attractive for the first 6 months.

Jeenee Mobile uses the Optus network, meaning you’ll experience the same 97 percent coverage throughout Australia as original Optus subscribers. The only difference is that you’ll likely be spending less for it. If the basics are your preference where phone use is concerned, taking a look at Jeenee’s plans is definitely a good idea.