Here are the key findings from recent reports which discuss the habits of Australian mobile phone consumers, there are more details in the article which follows below.

According to recent research in Australia, conducted by Roy Morgan, 6.2 million people have a prepaid mobile phone plan from either one of the three major providers, or one provided by the many MVNO‘s operating in Australia.

When people need to top up and recharge their prepaid mobile plans, supermarket is still the primary place for which they choose to do this. Supermarket recharges are ahead of recharging online at the service provider’s website, or by calling their phone number.

Of prepaid mobile phone plan customers, 26% last completed a recharge at the supermarket. Of those who recharged at the providers online website page, this accounted for 18%. Consumers who called the recharge phone line were 13% at last count and 11% walked into a retail store to recharge. 8% recharged at the service companies store while 6% used a smartphone app and 3% used SMS to recharge.

44% of prepaid mobile phone plan customers responded to the survey by saying that they had gone into a bricks and mortar retail store for their last phone recharge.

Of this percentage, 37% said that they had also used the internet to recharge at least once, along with a smartphone app or SMS. 5% have an automatic recharge setup on their account so that each time their balance drops to a preset level, their account is recharged.

“Providers need to understand their prepaid customers and ensure they are able to recharge in whatever way suits them best. Technology Traditionalists and Technophobes often want to be able to go into a store or speak to someone on the phone while the Digital Life crowd tend toward over-the-counter recharging at supermarkets and other retailers.

Technology Early Adopters are naturally inclined to get more credit by the internet, SMS or auto-recharge—but Older Tech Explorers are also more likely than average to use these channels.

“Next week, we’ll be examining just how often people with different providers recharge, and seeing how that correlates with these customers’ channel preferences.” 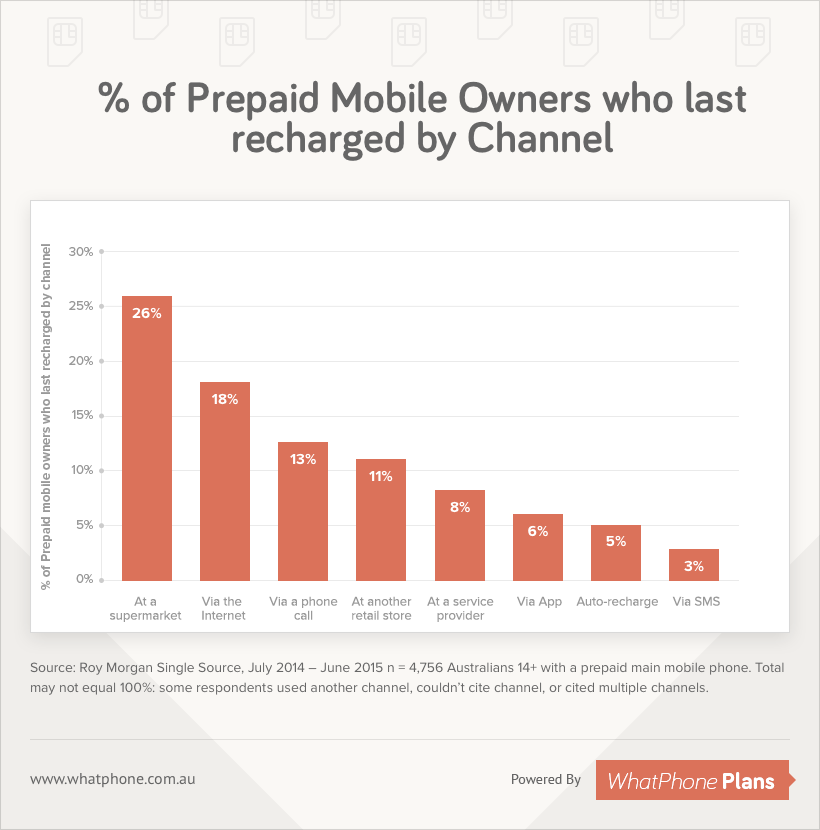 On average Australians tend to recharge their phones credit almost once every seven weeks, according to the research released by Roy Morgan, in their latest telecommunications and survey data.

Consumers which recharge their prepaid plan accounts once a month (or every four weeks) are directly in relation to the most common prepaid plans offered by Australian providers.

12% of Australians recharge more frequently of which 9% recharge their plan every 2 – 3 weeks. An additional 3% top up their prepaid plans at least once a week, putting them into the category of frequent power users of large amounts of mobile data.

9% of Australians recharge less often, with studies showing that on average they recharge once every two months and a further 13% of low consumption users are reported to recharge every three to four months. Generally these are people who only have a mobile phone for emergencies and tend to rely on using landline phone for communication. 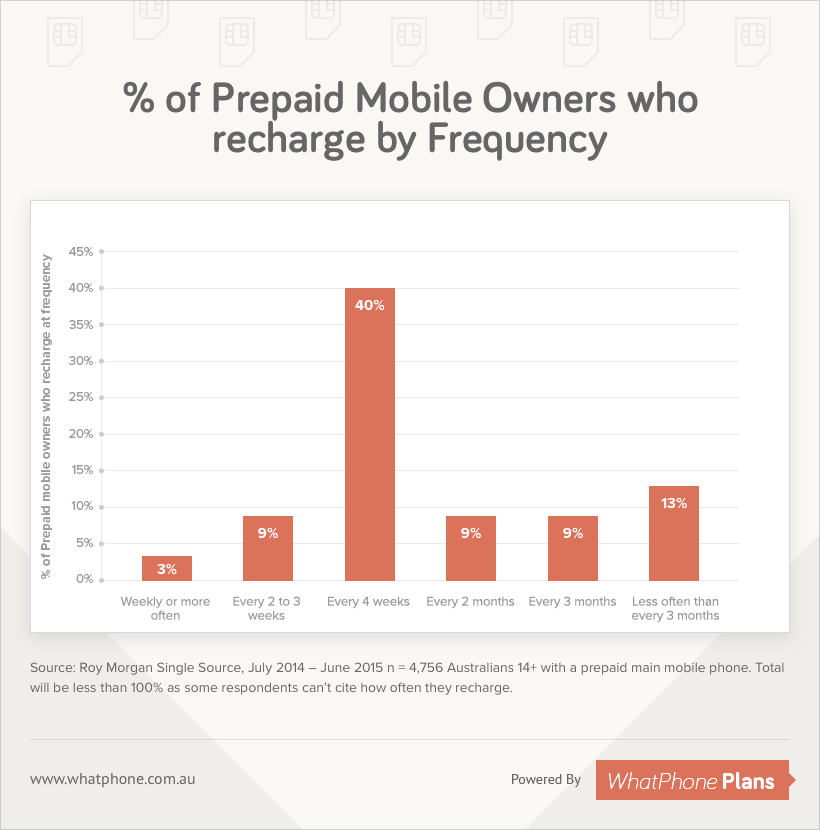 When you take a snapshot of all prepaid users and their average recharge time, you end up looking at an average recharge frequency of 48 days, or if counting in weeks this would be just under seven weeks.

But, you also need to factor in that depending on the service provider, there are some marked differences in the average number of mobile prepaid plan recharges.

For example customers which are on the Virgin Mobile network, on average have the longest gap between recharges, which results in one recharge in every 63 days or every nine weeks.

MVNO providers such as Amaysim, report that their customers top up every four to five weeks, which is similar to users on the TPG and Optus network.

Boost Mobile which is an MVNO reselling access to the Telstra 4G network, stated in the report that their customers are by far the most frequent recharges, with an average recharge time period of once every 28 days. This is probably due to the fact that Amaysim in comparison to the other providers offers fair value plans with generous data allowances.

“Last week, we looked at the top recharging channels used by prepaid mobile customers and found many differences in these preferences between providers.

“Data allowance is an increasingly important factor in when people recharge. Over half of prepaid mobile users who have a data allowance recharge every four weeks on the dot, often coinciding with the data expiry. Running out of data is also a common reason why prepaid customers find themselves topping up every week or fortnight or so.

In conclusion and our thoughts

Prepaid gives you a level of control which you simply just don’t get from other payment methods. You can effectively flex your monthly spend according to your needs, reducing it when you want by lowering the recharge frequency and raising it when required in a controlled way, which leaves you the consumer with the power of choice.

Prepaid services require a small amount of user attention, the same as when you consciously fill your car with petrol, rather than the postpaid alternative where is is always filled for you.

As a result, you generally spend more. We would argue that it’s this conscious topping up which makes for lower bills and that postpaid customers could learn a lot from prepaid customers in how they approach it.