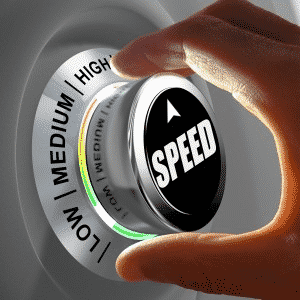 What Does it Mean When Your Network Speeds will be Limited to 1.5 Mbps?

Whether your plan is limited or unlimited, there can come a time where the usual allocation of data runs out. Depending on the size of your plan and how often you use it, this could be a regular occurrence or only happen rarely.

Typically, most plans offer an extra GB of data for a set cost when your plan limit is exceeded – most often around $10. However, another strategy (especially on unlimited plans) is to slow down the data speeds. The most common reduced speed is 1.5Mbps.

The term ‘Mbps’ is a measure of internet speed, an abbreviation of ‘megabits per second’. When a phone company tells a subscriber that their network speed will be limited to 1.5 Mbps, what this means is the maximum speed in which their network connection will function at any given time is 1.5 Mbps. It could even go lower.

This survey shows that many Australians do not know exactly what limits in data speeds entail.

Typically, when a phone company limits your data speed to 1.5 Mbps, one of two situations have occurred:

All major telecommunication brands in Australia now offer ‘unlimited’ data plans. Despite the name, these ‘unlimited’ plans do often have a data limit – however, the data limit refers to data at full speed. As long as the subscriber operates within this data limit, they will have access to the fastest available internet speeds. Once they hit this data limit, the speed of their internet connection is reduced to 1.5Mbps.

While some telcos cap their speeds once subscribers hit a certain limit, others (such as Optus) have their unlimited plans capped from the very beginning.

What Can Internet Speeds at 1.5 Mbps Do?

At 1.5 Mbps, basic internet browsing and social media sites are accessible, however, the pages are slower while loading.

Streaming services such as Netflix and YouTube are also accessible, but users will almost certainly experience buffering.

Music streaming websites can be generally be used at these data speeds, although features requiring more data such as high definition album art could take significantly longer to load.

Most mobile internet users will not find 1.5 Mbps fast enough to comfortably use. On average, the data speeds of 4G internet connections across Australia is somewhere around 30 Mbps, meaning that a phone only receiving 1.5 Mbps will be dramatically slower. It is a significant drop in the speeds that most people are now used to, which is likely to cause frustration.

Realistically, at these speeds subscribers will be unable to access any form of high definition (HD) content on the internet. Although network providers insist that these speeds can be used to access HD content, the frustrations experienced by real-life use cases paint a different picture. Video streaming services such as Netflix and YouTube are extremely slow and sometimes unwatchable when accessed at 1.5 Mbps data speeds.  Streamers such as Foxtel require a minimum connection speed of 3 Mbps for good quality playback.

Music streaming may not pose as many problems, however. Streaming sites including Apple Music and Spotify are able to optimize their bit rate in relation to the available network speeds subscribers have access to. Social media sites will also be accessible, but patience is required. At 1.5 Mbps, the average Facebook page will take approximately 5.02 seconds to fully load – far too long for most users.

Since ‘Unlimited Data Plans’ are Capped at 1.5 Mbps, Are They Really Unlimited?

Telstra, for example, offers an Endless Data BYO Mobile Plan that includes unlimited data for subscribers. However, only 40GB of this data is accessible at the network’s fastest internet speeds. Once the subscriber has passed the 40 GB limit, data speeds will be capped.

Should I Consider an Unlimited Plan?

Even with all the catches associated with unlimited data plans, they still can be a good investment. Most people can stay comfortably within their allotted data, and still take comfort in knowing that instead of receiving extra charges for going over the amount they will only have to deal with slower speeds for a time.

Depending on how much data used, unlimited data plans can aid in escaping exorbitant excess data charges, should uses surpass their data limit. Unlimited plans can be a good choice for some people – but those who regularly exceed their data limits will need to have large stores of patience to deal with the slower speeds.