Satellite phone plans are the next thing

Wired and mobile network technologies have evolved year after year. Satellite communications, on the other hand, have been a little quiet.

While satellite phone plans have been around for a long time, they just haven’t caught on to the public. Part of it has to do with how expensive they are. Another part is how bulky and unattractive the handsets are. And yet another part is how slow they work – how long it might take for someone in Sydney to connect when placing a call to their next door neighbor, because the data has to travel all the way to space and back.

But current satellite technologies look to change that. In the next few years, over 46,000 satellites will be launched into space, with the bulk of them belonging to SpaceX, Elon Musk’s parent company of Starlink, a satellite communications company.

The next wave of satellites will be smaller, faster, and fly closer to earth. These all add up to a recipe for modern space networks that can rival those on earth. In this article, we’ll take a dive into Starlink and get a glimpse into the future of satellite phone plans.

Elon Musk is the founder of Space Exploration Technologies Corp., or SpaceX for short. The company’s mission is to reduce transportation to and from space and, at some point, colonise Mars.

Starlink is the satellite communications arm of the SpaceX, aiming to provide network services to governments, airlines, mining companies, and others that operate in areas where traditional networks are sparse or nonexistent.

Starlink will also be able to wholesale its satellite network to telcos, who can then provide satellite phone plans to consumers in rural areas that don’t have reliable high speed networks.

One of the challenges with satellite networks is their high latency – the amount of time it takes for data to travel from Point A to Point B, and back if need be. This high latency is a result of how far into orbit traditional satellites float – around 36,000km from Earth. This distance means data has to travel such a long distance, resulting in some pretty slow, laggy service.

Low Earth Orbit (LEO) satellites, on the other hand, are launched into orbit and remain around 500km to 2,000km above Earth. This shorter distance translates into the possibility of lower latency.

In fact, last year, London based company OneWeb recorded an average latency of around 32 milliseconds with a LEO satellite. Compare that to the 600 milliseconds of traditional satellite communications networks. 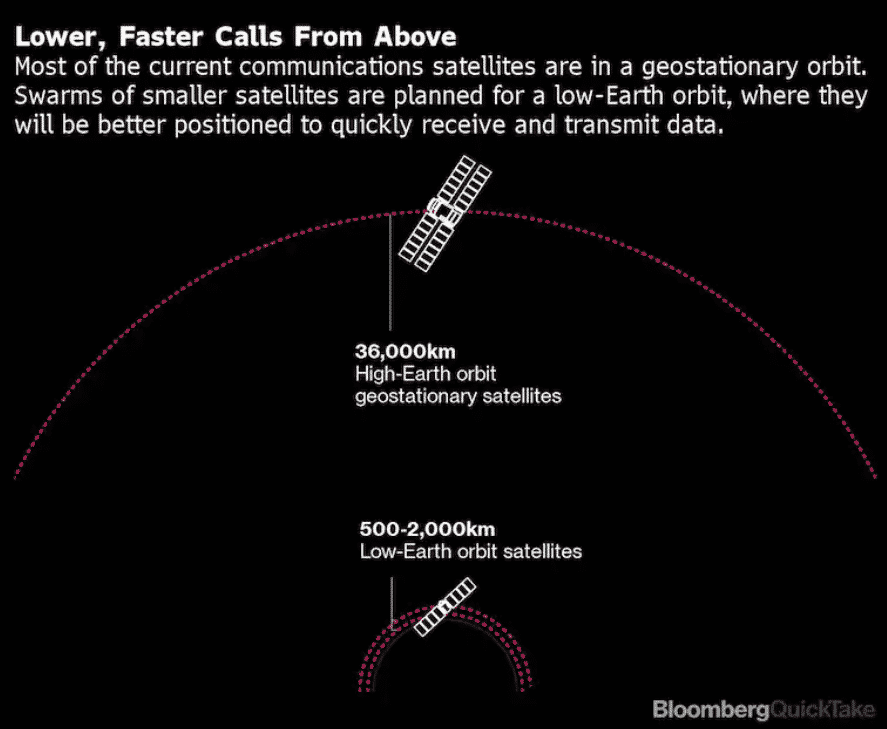 Starlink targets even lower latency with thousands of satellites

SpaceX has a lot more funds than OneWeb, and their ambitions match those funds. Elon Musk plans to launch around 42,000 LEO satellites into orbit in the coming years. Last year, Starlink already had 480 satellites in orbit. This year, they’ve launched 120 so far, and plan to launch another 120 before the year runs out.

These thousands of satellites may sound like overkill, but they are necessary to creating any kind of competitive edge for Starlink, as they would reduce the latency problem significantly. Musk says Starlink’s latency will initially be around 20 milliseconds, and will be cut in half when fully launched.

The number of satellites is significant because LEO satellites have to move a lot faster than traditional satellites in order to remain in space at such low orbits, given the Earth’s increased gravitational force. And when one satellite moves so fast out of your area, it takes its network signal with it. To replace that signal, another satellite would have to follow in its stead, taking over fast enough to avoid your signal dropping.

The exact numbers vary, but LEO satellites move at around 27,000kph. Compare that to traditional satellites that move at around 11,000kph. These super fast LEO speeds mean that as one satellite zooms away, taking its signal with it, the next satellite can take its place in around 2 minutes, keeping your signal alive and well.

What could Starlink mean for traditional telcos like Telstra, Optus, and TPG Telecom?

Starlink and other upcoming satellite networks can disrupt the telco industry as we know it, if all goes as planned. These satellite services will be global – while Starlink might be headquartered in the United States, its satellites will orbit the entire Earth, meaning its services will be available everywhere in the world.

While this might sound like a threat to traditional telcos like Telstra, Optus, and TPG Telecom (Vodafone), it really isn’t. Satellite networks like Starlink are targeting governments, mining companies, airlines, and other major entities that might operate in areas where there is little or no traditional mobile or wired networks available.

As for consumers, upcoming satellite networks from companies like Starlink are targeting the traditional telcos as resellers. Much like Telstra, for example, wholesales its network to MVNOs like Belong who then resell phone plans to consumers, so would Starlink wholesale its satellite network to major telcos like Telstra who would then resell to customers in rural areas where high speed networks are sparse or nonexistent.

Satellite networks are a boon for such rural consumers because they would be orbiting the earth, making them readily available anywhere in the world. High speed networks are hardly reliable in rural Australia because telcos don’t build infrastructure there as much as they do in urban areas. That’s because rural areas are sparsely populated, and so investing in such expensive infrastructure there would be counterproductive given the lack of enough customers to make the bottom line worthwhile.

Final words – Some concerns about Starlink

Data travels faster through space vacuums than through cables, so LEO satellite networks like Starlink will have a speed advantage over traditional wired broadband. That’s great news, but it isn’t all positives.

Starlink’s solution to the high latency problem is launching tens of thousands of satellites into orbit. This could literally clutter space, especially considering LEO satellites, by their nature, are close to Earth.

The high number of satellites also increases the possibility of satellites crashing into each other. While Starlink has the grandest plans so far, other companies have plans to launch satellites of their own. Could they really communicate with each other effectively to avoid satellite collisions when traveling at such high speeds?

Despite these concerns, Starlink and other LEO satellite networks are revolutionizing the communications space. Your next plan just might be a satellite phone plan, accessing the web from an extraterrestrial network.