What Makes the Internet of Things Possible

The Internet of Things has been around for a while

The Internet of Things (IoT) might sound like a brand new technology, but it really isn’t. Chances are you’ve used it before, and probably have for a few years. Smartwatches that control (or are controlled by) other devices are one of the most basic examples of the IoT, and they even have their own mobile plans.

The list has grown over the years to industrial machinery, farming equipment, smart cities, and beyond. As the technology slowly becomes widespread, so does its applications. And with the aid of technologies like 5G and AI coming into the picture, you can expect even more applications.

But what makes the IoT possible? Well, defining the technology can get a bit complex, and you need to understand exactly what it is in order to get a good grip on how it works. In this article, we’ll attempt to give you as basic an insight into what makes the Internet of Things possible, without all the confusing tech jargon.

Essentially, the IoT simply refers to interrelated devices that communicate with the aid of the Internet. They’re equipped with sensors of some kind that detect relevant changes in their environment and communicate those changes to the clouds, and from the clouds to an interface that issues a command.

Think about your smart thermometer at home. It likely comes with an app for your smartphone where you can issue commands to adjust the temperature, or set it up to adjust the temperature automatically when it’s too hot or too cold (you define what that means). Its sensors determine whether the temperature falls outside your desired parameters, after which it can either communicate this to the cloud and, in turn, to your app where you decide what command to give, or it adjusts itself based on a predetermined setting you entered. 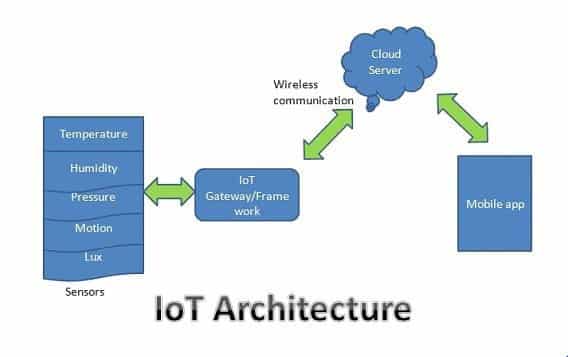 Basic diagram of an IoT system in a smart home. src

The same smart home scenario can be applied to outdoor lights that conserve energy by turning themselves on at sundown, and off at sunrise. How about sprinklers in the yard that can detect when your grass needs watering? The examples are endless, and in the case of the smart home, the benefits go beyond convenience – these IoT devices are energy-efficient and can save a lot of money.

4 components that make the Internet of Things possible?

The ideal Internet of Things system needs four ingredients to function – the Internet, sensors, the clouds, and an interface.

The main ingredient in an IoT system is the Internet. The devices can’t communicate without a network, and so there’s no IoT without the Internet.

Its also essential that the network in question be wireless. However, this technically isn’t a requirement because a wired Internet network can aid communication. However, such a wired scenario defeats the purpose and limits IoT applications by depending on a wired infrastructure.

With a wireless network, devices can communicate from miles apart without being physically tethered together. Think about smart cities where different garbage cans can communicate to a central location in a city that they are full and need to be emptied (or not full, so they can be bypassed). Using wires to connect all garbage cans in that city to that central location will be virtually impossible, not to mention ridiculously expensive.

An IoT system needs some sort of sensor. The sensor(s) could be fitted a device, machinery, an animal, or even a human – it could literally be fitted on anything or nothing at all. The sensor(s) detects changes in the environment and communicates those changes to determine whether to adjust.

Our example about the smart thermometer demonstrates the scenario precisely. Other examples of basic IoT sensors are motion detectors, heart rate sensors, and so on. But lets look at something even more complex.

Using cameras as sensors, Telstra trained a Rasberry Pi to detect whether a chair was empty or occupied. The telco has also used cameras to detect river heights to track the flow of water.

Also consider Amazon Go, the automated checkout supermarket where multiple cameras are used as sensors to track goods removed or placed on the shelves to allow customers shop and checkout without ever paying at a register or self-checkout.

The clouds aren’t necessary for the IoT, but they’re essential to an ideal IoT system. This is where information is stored wirelessly, without physical storage. The device communicates the information detected by the sensor(s) to the clouds for processing and/or storage in real time or otherwise.

The cloud can essentially power the IoT system so that the device itself doesn’t need much hardware for local data processing and storage. This improves efficiency, removes size constraints (the device can be as small as possible), and ensures the device can be controlled remotely.

In the smart thermometer example, the interface is an app on your smartphone. You can enter settings for the thermometer to adjust itself based on certain parameters, or command it to adjust when it reports a certain temperature.

The Internet of Things is a complex technology in theory if you cover every aspect of it. But in practice, it’s just a system where sensors detect changes in the environment, report those changes for processing and/or storage (perhaps to the clouds), and adjust themselves based on predetermined settings or commands issued from an interface.

This explanation of what components make the IoT possible can apply to a range of devices and machinery in a range of industries, and even to living things like animals and humans fitted with sensors. And as technologies improve, sensors are taking on all forms, with cameras being the latest.