Which Is Better – 5G Mobile Broadband Or The NBN?

Can we really compare 5G mobile broadband to the NBN at this stage?

With 5G promising a ton of benefits, the telco landscape is getting a bit shaky. While fixed-line networks were once the way to go for high speed connections for homes and businesses, 5G now compares favourably to what those wired networks offered – if not surpassing them. So there’s a popular question now being asked – between 5G mobile broadband and the NBN, which is better?

The National Broadband Network is Australia’s answer to the wired option. The NBN is also rolling out, just as 5G is rolling out. However, the NBN has made larger and wider strides so far, as their rollout kicked off earlier than 5G. But telcos seems to be getting fed off with NBN wholesale prices eating into their profits, and 5G mobile broadband  is looking like a really nice way to circumvent their suffering. 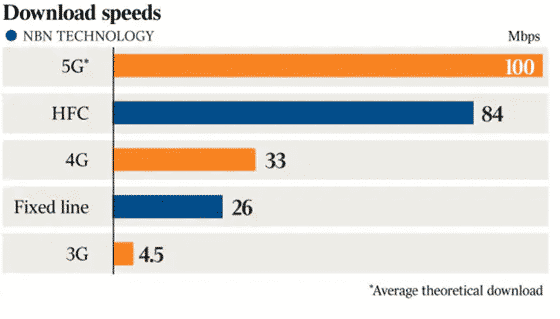 But on the other hand, the 5G rollout is far from complete, and only Telstra and Optus actually have sites turned on right now. Even with those sites turned on, their coverage are only in select areas, and so millions of Australians don’t have access.

Answering the question of which is better – 5G mobile broadband or the NBN – is more difficult than easy given their different rollout stages. But we’ll take a swing at it anyway.

The NBN is losing fans quickly

The Australian government pretty much owns the NBN – they wholesale it to telcos who then sell it to you. These telcos sell to you in speed tiers – the higher the tier, the faster the speeds, the more expensive the plan.

But so far, customers don’t think the NBN lives up to the promises. One customer complained of having no internet for 6 weeks after installing his NBN service, and the problem was never resolved after eight visits by technicians and numerous visits and complaints to the NBN and Telstra (his NBN service provider). He eventually switched back to his old cable internet setup.

Complaints about the NBN continue to increase. Image Source

If we retell every NBN story out there that’s similar to that customer’s, this will turn into an eBook rather than a simple post. Just do a quick Google search to get the idea – a lot of customers aren’t happy with their NBN service.

Consumers aren’t the only ones frowning at the NBN, though – telcos are too. Apparently, the NBN wholesale prices are just way too expensive for service providers to turn a profit. In addition, those wholesale prices keep going up, and there’s even a new tax in the works. TPG and Telstra are amongst the latest to voice complaints over these fixed-line broadband tax increases.

These increasing NBN wholesale prices and taxes will eventually be passed on to the consumer, which will probably result in even more complaints. With bad service and higher prices being the case, the NBN might be a bit shaky if any worthy competitor enters the market.

5G mobile broadband could be an alternative

You’ve probably heard about the promised benefits of 5G – up to 100 times faster than current LTE speeds, very low latency, and higher bandwidth. These sound like the NBN’s promises before their rollout began, so why should we think 5G will be any different?

Well, first of all, 5G isn’t the NBN. It’s not a fixed-line network, and it’s not native to Australia. Instead, its a wireless network that’s deployed by telcos themselves, and will likely reach the speeds advertised – eventually. If this becomes true, then 5G will in fact be that worth competitor to the NBN.

Think about it – even current 4G networks achieve some pretty high speeds, sometimes better than what the NBN can offer. A newer wireless network technology must exceed the previous generation. Just as 4G overtook 3G, so will 5G overtake 4G – but in an even larger capacity.

But the problem now is that 5G is in its early stages. Right now, Australia’s 5G story is only being told by Telstra and Optus. Vodafone is preparing their 5G launch, but we’re yet to experience it. In fact, we tested out 5G here in Australia and weren’t really impressed, but that probably has a lot to do with the limited coverage areas.

The verdict – so which is the best option between 5G mobile broadband and the NBN?

Well, 5G mobile broadband promises a lot and will likely deliver most of what it promises, but the technology is just too early to fully analyze. The NBN has rolled out to a much farther extent, but has failed to reach expectations.

While it’s decide the best option at this stage, here’s a few things to consider while making your decision, using Optus as an example: