How do I set myself up with Amaysim Prepaid ?

It’s dead simple to set your Amaysim prepaid service up. The easiest way to get your SIM is to order it online. If you live in a city area, you can expect to get it very quickly, possibly even the same day, thanks to Amaysim’s 3 hour delivery windows.

When you have the physical SIM in your hand, go online, and ‘activate’ your SIM by entering a few details in to the website. If you’re porting your number ( bringing your phone number from another phone company, you’ll have to wait another few hours ) and then you’re done. Just stick your new SIM in your phone and you’re away.

One of the great things about taking the service as a prepaid service is that you have to provide fewer details to the phone company about yourself. Not only does that make the process quicker for you, it also feels a bit better. There’s no reason for companies to know all about you.

What’s the difference between prepaid and postpaid ?

The only difference between prepaid and postpaid plans from Amaysim is when you pay for the service. With a prepaid service, you spend money before you make calls or use data on their network. You always know exactly what you’re spending, as a result. With postpaid plans, you pay after you’ve used the service, usually at the end of the month. Any ‘extras’ ( like out of bundle International calls or extra data ) are charged to you automatically with a postpaid service.

Can any phone plan from Amaysim be prepaid or postpaid ?

Yes. Amaysim are the only phone company we are aware of who sell their plans as both prepaid and postpaid. You decide which you want when you activate your service online.

Does Amaysim’s Prepaid Service use per kB or per MB charging ?

Do I really need all this data ?

Average data usage is already around 6GB per month in Australia ( according to our own research in late 2017 ) so there will be some users who need each type of plan that Amaysim offers. The key factors you should bear in mind when you’re deciding how much data you need are what your historical use has been and what the trend is. This is one of the most important considerations you’re likely to have, so give it the time it needs.

Are there any other options on the Optus 4G network ?

Use the Optus 4G network like Virgin Mobile or Bendigo. While the network access is the same, Amaysim’s level of service is actually far more sophisticated than some. Simple things like the delivery time frame for the SIMs you order online being measured in hours rather than days, Amaysim’s onshore Australian call center ( Virgin’s is overseas ) and an app to measure your data usage ( Bendigo don’t have one ) should all make you lean towards Amaysim. In our view.

How can I recharge my prepaid service ?

There are a variety of ways in which you can recharge your prepaid service. Amaysim have more than 10,000 retail outlets which stock their recharge vouchers. We usually recommend that you download and use the Amaysim app for all of your self service needs, including recharging your prepaid service. That’s often the most sensible way to both manage your usage ( it’ll tell you how much data you’ve used for example and recharge your service. )

Auto recharge is a facility you can set up with most phone companies including Amaysim. Auto-recharge allows you to automatically debit your credit or bank card when your prepaid service needs a recharge. Auto-recharge is the default setting for your prepaid service when you choose that option with Amaysim. You can choose not to auto-recharge your service but unless you consciously do that, you will be automatically charged every 30 or 90 days, according to the plan you’re on.

This is an incredible time to be buying a SIM plan in Australia. There are options for you on any network you would care to try. Amaysim are an MVNO ( also known as a smaller phone company or network reseller ) which use the Optus 4G network. They’ve only been going a few years but it’s no exaggeration to say that they are one of the biggest phone companies in Australia now. They have nearly a million customers. That’s almost as many as Virgin Mobile have.

It used to be the case that Virgin Mobile were the best on the Optus 4G network. There are a number of independent data sources which say that’s no longer the case. Many would tell you that Amaysim are. Here’s why we think Amaysim’s Prepaid recharges are the best :

Comparing Amaysim to the main competition :

Yes, Amaysim offer prepaid plans. Any of Amaysim’s plans can be bought as either prepaid or postpaid plans.

Any of Amaysim’s plans can be bought as either prepaid or postpaid plans. The process for getting hold of an Amaysim plan is extremely easy :

2. Await SIM Delivery :
Amaysim’s delivery processes are slick. If you live in a major metro area of Australia, you could get the SIM you order in as little as 3 hours. If you’re outside, you might have to wait until the next day.

3. Activate – on Amaysim.com.au :
When the SIM is delivered to you, go back to the Amaysim website to activate it. Activation takes care of what the phone companies call provisioning. It lets them associate you with the SIM you’ve bought. If you want to keep your phone number, you tell them that at the point of activation and they’ll bring it across for you.

4. Choose prepaid :
At the point of activation, you will be asked if you want to activate the service as prepaid or postpaid. It’s your choice. We explain the benefits of choosing a prepaid service from Amaysim, below.

5. Apply Amaysim Recharges from that point :
If you choose prepaid, you will buy recharges for your Amaysim service every 30 days. You can ( buy and ) apply a recharge voucher online, using their app or in many retail stores around Australia.

Who uses an Amaysim Recharge ?

Now you know how to get and activate your Amaysim prepaid if you want one, you can take the next step. You need to figure out if the Amaysim prepaid service is right for you. Prepaid plans tend to appeal to young people and those with a good deal of financial prudence.

Amaysim’s prepaid service is likely to appeal to you if you’re someone :

How can I perform an Amaysim Recharge ?

Auto-recharge takes away the conscious choice to recharge your service. Amaysim set their prepaid plans us to auto-recharge by default. You can turn this off in their online self service portal if you would like to.

Recharging is easy. You can recharge your Amaysim service online, through their self service website, using their app or by sending an SMS to Amaysim. There are a couple of things to remember.

Amaysim are the only phone company we are aware of which offers their plans in either a prepaid or a postpaid service. 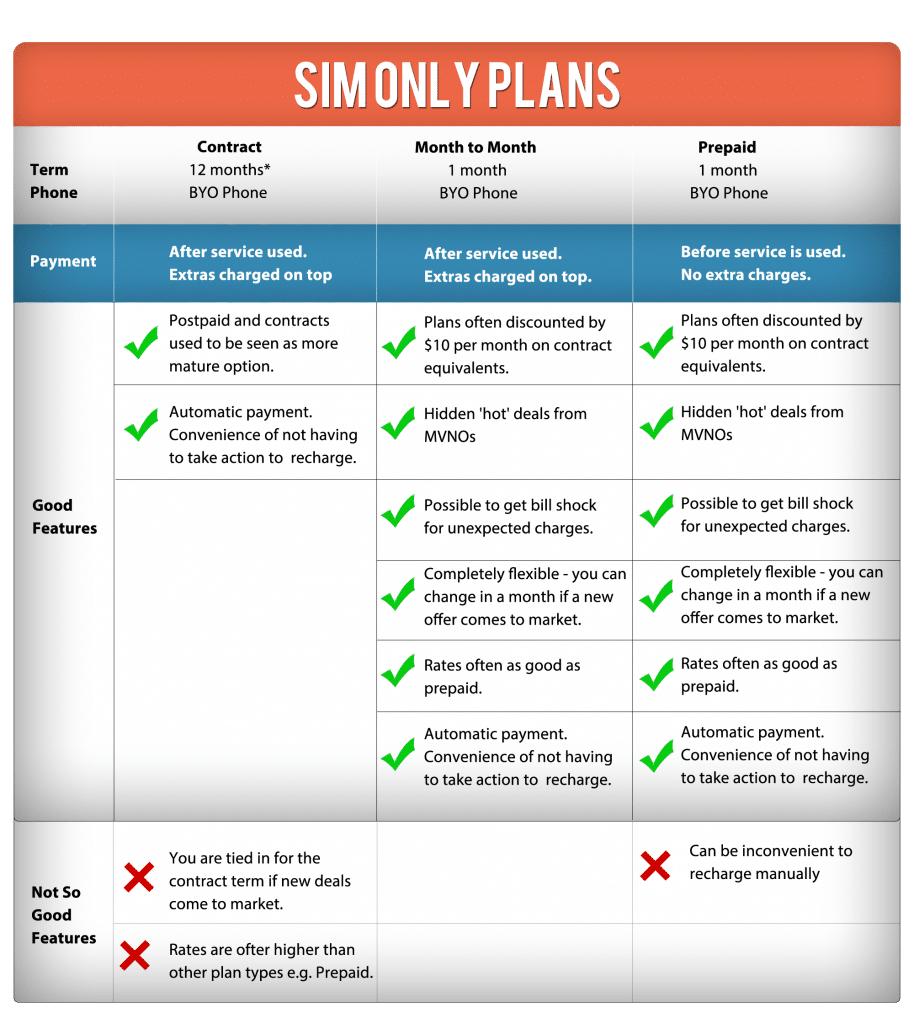 Prepaid is an enormously under-rated way of getting a phone SIM. Not only do you avoid the need for a credit check ( which makes these plans ideal for anyone under 18 ) but you’ll get the same great rates from Amaysim if you activate their plan as a prepaid service, as if you take a postpaid service. They’re the only company that do this and it’s crazy good.

Here’s what we love about deciding to go prepaid with these services.

There really aren’t that many downsides to having a prepaid service. Just make sure you can recharge where you are so that, if you do run out of credit, you can top yourself up.

Amaysim’s plan range is deliberately simple. There are three types of plan. Remember, you can buy any of these plans as a prepaid service.

Why is Amaysim prepaid better than other services on the Optus network ?

The short answer to this is that Amaysim are experienced phone company operators. Simply put, Amaysim have made the right investments to improve the experience of being a customer with them for a prepaid service. One of the things that sets Amaysim’s prepaid services apart from others is the sophistication of their offering. The management team behind Amaysim established their company up in Europe and tried many of the same tactics that they’re using here.

Apart from Amaysim, who else should you be considering ?

We advise people to consider Amaysim’s competitors from two points of view.

No wonder then Amaysim and their prepaid recharges are a critical component of the nearly 1 million customers to have chosen the company since they launched only a few years ago.

In some ways, Amaysim are just one of the pack. They are just one of the increasing range of 4G SIM Only Plan Providers. Optus was first to let the resellers ( including Prepaid service resellers ) who access their network, sell 4G services. Virgin Mobile, the wholly owned subsidiary of Optus was next. Boost Mobile the wholly owned subsidiary of Telstra came along after that. Amaysim came a couple of months later. It’s not hard to see that the phone companies play favorites with their own resellers when it comes to new plan facilities like faster data, is it ?

Vodafone has recently allowed a new partner, TPG, to resell 4G data services on their network . We anticipate a slew of other network resellers working on the Vodafone network to follow. 2016 will be the year that every network gets 4G.

So, Amaysim is like an ever expanding array of 4G phone providers. However, in some other, equally important ways, they are not like everyone else. They’re one of the only phone companies to have a plan range which is easy to navigate. And within that plan range, you can choose whether you want any plan as a prepaid or a postpaid variant. It’s staggering a simple mechanism for customers to navigate and amazingly effective and giving customers what they want. In our view, it’s something that every phone company should do.

In addition, Amaysim offer market leading value and the best customer service in the industry. No wonder then Amaysim and their prepaid recharges are a critical component of the nearly 1 million customers to have chosen the company since they launched only a few years ago.

Extra Resources – Articles of use to Prepaid Users

And, remember, before you buy, read the CIS (that’s the Critical Information Summary–a clearly written definition of what is and is not included in the plans from these phone companies) before you buy. You need to be confident in the plan you choose yourself. You’ll find the CIS on the Vodafone website.

Compare all of our prepaid plans

If you need another network, you might like to check our Best Prepaid Plans Page and compare all the plans ( including every one mentioned on this page. ) A list of best value plans using the Telstra, Optus and Vodafone networks.