Embedded vs eSIMs vs Soft SIMs – What’s The Difference ?

In this article we explain how eSIMs are different to Soft SIMs and which technology is of use in which situation.

Introducing the differences : eSIMs vs Soft SIMs vs Reprogrammable SIMs

Technology often starts with a number of similar and competing rivals. Take the home video player for example. Betamax fought with VHS for a few years before VHS became the standard.

The same is happening now, in the telecommunications industry when it comes to SIMs and the rising tide of their next generation. There is a lot of talk in the industry about Embedded SIMs vs Soft SIMs vs Remotely Provisioned ‘Soft SIMs’.

A number of ‘factions’ are competing to further their interests. As usual. Each group has different needs and propose different technology to achieve them. The current status of each and the feedback we’ve heard about their motivation leads to a compelling, seemingly likely outcome.

Let’s consider who’s involved and what they want.

Commonalities between Embedded and Soft SIMs

The purpose of a SIM isn’t being changed by any of this technological evolution. SIMs will always be and have always been a way for people to have a secure method of accessing a phone company network.

However, as we all move to a world of billions of Machines communicating with billions of machine and the Internet Of Things, the practicalities of maintaining secure access to wireless networks for each device devices becomes problematic. There are two polarized solutions proposed and one option which appears to be an acceptable compromise for most parties involved.

The two polarized next gen SIM solutions are :

The medium ground appears to be a practical reality. Reprogrammable SIMs are in existence and in use already.

The GSMA is moving towards a single agreed standard which will cover the requirements of all three of these solutions. It may take a long time to get there. It appears that, with the Apple SIM and equivalent reprogrammable SIMs, the thin end of the wedge has been defined.

More on these new SIM types

As we’ve said, a soft SIM is an entirely software based replacement for the classic SIM card. It’s an alternative to the eSIM. There are no plans that we are aware of to roll out soft SIMs at this time. In theory, it will do the same thing as any other SIM, it will allow users to connect to their network of choice, by selecting the carrier which they wish to use and entering in their details. No longer will users needs to replace the current physical SIM card in their device and wait to be ported to their next service provider. Switching providers will be automatic and instant, all done from within the device with only a few taps of your finger. 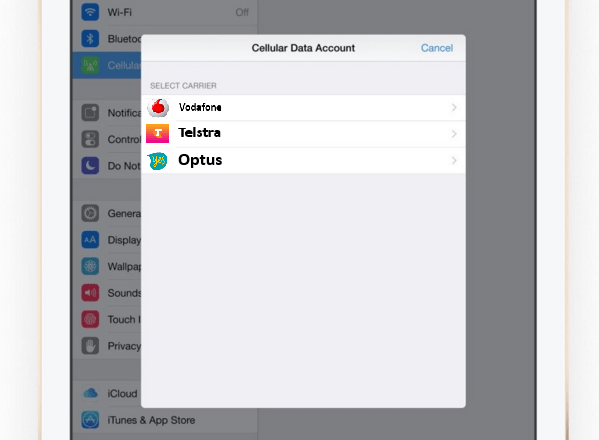 How these new SIMs will affect users

Consumers are the biggest winners from any of these changes in SIM technology. Being able to connect to a different network operator at the drop of a hat in real time, is great news for Australian consumers which are calling out for more choice and freedom in the mobile plans which they use.

While in recent years in Australia consumers have been lucky to receive much more choice thanks to the introduction of MVNOs entering the telecom industry, allowing them to switch providers if they find a better deal, still, for the most part, the telcos hold all of the cards. Apple understands this which is why they are so heavily investing in this type of future-thinking technology. A happy consumer is more likely to be loyal to a brand, which puts them in a good position in the future should they also enter the Australian telecommunications market as an MVNO themselves.

How these new SIMs will affect phone manufacturers

Apple, Samsung and Google have for a long time wanted to reduce their reliance on the telecom operators, for when it comes to both distribution of their devices and the plans which are associated with their devices. In recent years, all three companies have slowly started to move more in the direction of selling their own manufactured devices online, as in the case of Google and their Nexus smartphone. It’s pretty obvious that they are doing this as they want more control and a much larger share of the telecom industry.

While this sounds like good news for consumers, we could end up in the future with a situation where the smartphone manufacturer controls the device which we use, the MVNO we use and the network which we connect to. Apple is a large company which is constantly making consumers lives easier with the advancement of new technologies which they introduce via their innovative products. However, we could all end up with a situation where we are locked into their eco-system ultimately and that includes the telco cellular coverage aspect of the customer experience.

Telcos for the most part will be the biggest losers from the large scale roll-out of soft SIM technologies. Removing all the power from them and putting it back in the hands of consumers will no doubt have a large effect on the telecommunication companies earnings, which will not make them happy at all.

Consumers who are not fans of the large smartphone manufacturers Apple and Samsung might find themselves in a future situation where they will have to purchase these companies products to take advantage of soft SIM technologies, if it becomes an industry standard and if smaller mobile phone manufacturers don’t offer the same range of functionality features.

What could the world look like in a few years when everyone has one of these new SIMs?

The traditional physical SIM card will continue to exist along with the soft SIM, but as with all traditional technologies, newer advancements will always offer better features, choice and functionality. Australian consumers will be much better off, allowing in real time to select the current best SIM only or prepaid deal for them, based on their real-time usage. Postpaid mobile phone contracts will no doubt go the way of the dodo, as there will be no need to be locked into long-term two-year contracts.

Being able to buy the latest smartphones outright and direct from the manufacturer, with the ability to switch network providers in real time using soft SIM technology, users will be able to take advantage of promotions and special deals on the fly.

This situation is not unique. Telco is an industry beset with technology and acronyms. Similarly, 4G and LTE are used interchangeably when they are different things.

A lack of agreed standards always disadvantages any industry. Trains with different gauges in different Australian states were more expensive to produce ( less mass production was possible and freight had to be unloaded at the state line and repacked to have it continue on its journey.) This was obviously more expensive as a transport cost – an expense which would have eventually been passed on to users.

When it comes to standards for Embedded and Soft SIMs, there are so many credible players with invested interests in the status quo, it’s turned in to a ‘Game of phones.’ ( With apologies to Virgin Mobile who coined that phrase for a game 2 years ago. ) It seems that Samsung, Apple and ( potentially ) a consortium of other OEMs have established reprogrammable SIMs as a way to start the avalanche of movement towards much more flexible, potentially ultimately entirely soft SIMs.

The reprogrammable SIMs they’re trialing now are probably worse for the phone companies than they realise. They can hold two SIM profiles at once. This removes coverage as a differentiator. Shortly, people will be able to use a cheap Vodafone connection when they are in town and a more expensive Telstra connection when they’re out in the bush. Apple have thrown all the cards in the air again. Let’s see where they land.