Which is Better – 4G Mobile Broadband or the NBN ?

5G has been in the talk of the technology world for the past few years. The hype has been everywhere, promising lightening fast speeds, low latency, high bandwidth – all the makings of a sci-fi movie. 5G has been promised as the ultimate internet solution, blowing out current wireless and wired connections, including the National Broadband Network (NBN).

But what about 4G? Your current LTE network isn’t really that bad, is it?

You stream ultra high definition videos with hardly any issues, you game over the Internet, you do all the things your smartphone can handle network-wise without any issues. So what’s so bad about 4G?

The fact is that 4G is pretty great, and can serve as a solid alternative to the NBN, if not a better overall option. In other words, while 5G promises you the world in the near future, 4G can give you that right now.

In this article, we compare 4G mobile broadband to the NBN, and we think you shouldn’t abandon your 4G network just yet.

The NBN is the Australian government’s answer to bringing fast internet to every home. The network is wired, and was introduced to bridge the digital divide and put Australia at the forefront of innovation. The government promised all sorts of high, blistering speeds, just as we’ve seen 5G proponents do. But at the end of it all, the NBN has been a mediocre network with speeds that are really nothing to brag about, and customers are not pleased. 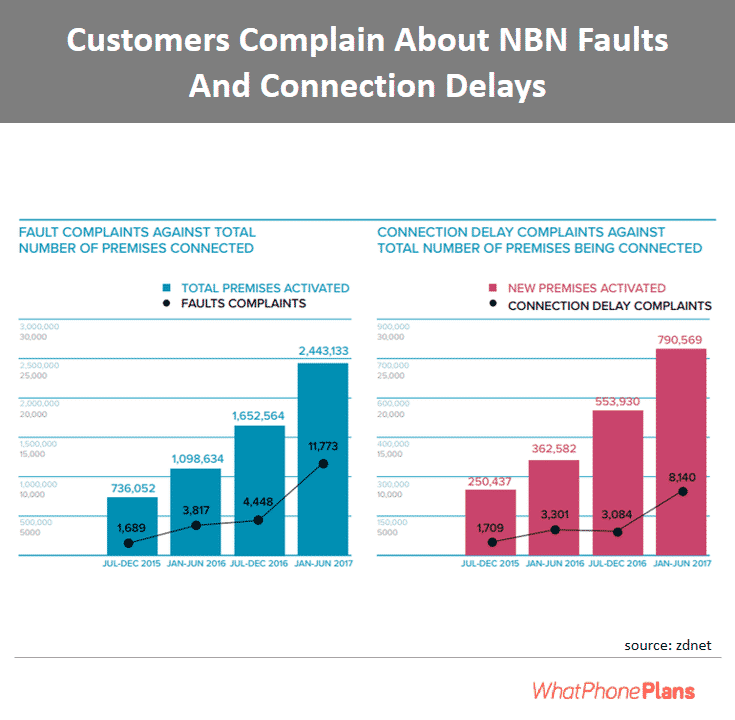 Customers complain about the NBN faults and connection delays. Source.

Add to that the fact that telcos are fed up with the government’s wholesale system. See, the NBN itself isn’t selling you anything – instead, it sells to telcos who then sell to you. This wholesale system gives the government some sort of monopoly over the wired network, and they pretty much control price and speed tiers.

Recently, telcos have complained about this, claiming there isn’t enough room for profit. As a result, speculations about 5G being a solid alternative to the NBN have been echoing over the past couple of years, in the sense of a 5G home broadband setup.

The idea goes like this: 5G promises blazing fast speeds that should dwarf the NBN, and its a wireless network which means there won’t be a bunch of huge installation fees. In fact, Optus is currently basing its 5G strategy on this fixed home wireless broadband idea.

But if that’s all the basis of the argument is, then 4G presents the same benefits over the NBN that 5G does, and 4G is already available.

Benefits of 4G mobile broadband over the NBN

4G mobile broadband presents the same advantages over the NBN as 5G does on the following two fronts:

We’ve seen a significant drop in the price of mobile data in recent years. Also, with a wide range of major telcos and MVNOs selling 4G data plans, there is also a variety of data packages available for everyone.

NBN plans are sold based on speed tiers and data caps. There are four speed tiers ranging from around $50 to $90. 4G, on the other hand, gives you a broader price range – you can even find data plans for as low as $15.

While telcos want you to get excited about 5G and its promised high speeds, you should also expect the technology to come at higher costs than current 4G plans. For instance, Telstra is currently offering their 5G network at no additional cost, but have informed customers that this will only last until June of this year, when 5G access will require an additional $15.

Thus, comparing the three networks – 4G, NBN, and 5G – a 4G mobile network will give a wider price range that will generally be the cheapest.

While 4G presents cost advantages over the NBN, the network doesn’t win in every aspect – but the NBN advantages are not enough

Yes, 4G mobile broadband has a wide price range that’s quite cheap compared to the NBN, but the NBN wins in data caps and actually spells out the speeds you should expect.

But even with these highlighted NBN advantages, nothing about the service is really certain. Customers have complained about ridiculously slow speeds, and have been ditching the NBN for 4G mobile broadband solutions.

A recent survey of NBN customers showed that 22 percent of them claim their previous cable networks were faster than their current NBN, and 34 percent of them would like to switch back to their pre-NBN connections or get a mobile broadband plan.

So what’s the verdict? I’m sure you already guessed it – you’re better off with a 4G mobile broadband, despite the highlighted NBN advantages. It all boils down to speeds and costs, and 4G wins in those categories if you go with the right telco and plan.