Australia is one of the front-runners in the race for 5G domination, but it’ll still take a long time from now before majority of the country’s landmass has 5G coverage. src

The adoption of 5G is underway across Australia and there’s no stopping it now. Soon, the majority of Australians will have access to 5G’s blazing data speeds and instantaneous data transmission. But in the meanwhile, the rollout is unfolding gradually within only a handful of cities. Read on to find out if your city or a close location is among the first few selected.

The selection of cities for the initial phase of the rollout has been a result of an interplay between politics, economics, and demographics. While many cities have lined up to exploit the first-mover advantages of the new network, others are more inclined to become late adopters.

There’s currently no news of when 5G will become available in most major cities. However, the following section highlights the areas where the top three telcos have chosen to set up 5G network coverage this year. 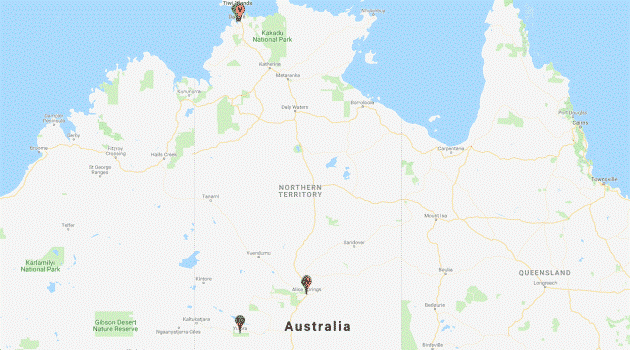 A map of 5G towers in the Northern Territory. src

Telstra launched its 5G network in May 2019 and is expecting to give some 4 million Aussies access to its 5G network this year. The telco was also the first to introduce a 5G-enabled smartphone – the Samsung Galaxy S10 5G – in Australia and has since gone on to line up a wide variety of 5G phones.

Telstra has been one of the most aggressive in Australia’s 5G foray, continuously rolling out more 5G base stations and launching more 5G-enabled phones by the day. However, one area the company has lagged in – which others like Optus have taken advantage of – is the 5G Home Broadband category. Rather than release a 5G Home Broadband device and plan, the company offers the HTC 5G Hub – which can power internet connections in up to 20 devices simultaneously – as an add on to its mobile broadband plans.

The first 5G base stations of the carrier were set up in Adelaide, Canberra, Brisbane, Hobart, Launceston, Toowoomba, the Gold Coast, and Perth. As of April 2020, the company’s 5G network is available in over 32 cities and regional centers across Australia, including Central Coast, Maitland, Grafton, and Kempsey.

Optus’ official target is to set up 5G network sites across some 1,200 locations by March, 2020. It first offered access to its 5G network through a 5G home broadband plan. The telco has also launched a wide collection of 5G-enabled phones. However, it has refrained from offering elaborate 5G mobile plans like the other big telcos.

For now, your best chance of enjoying Optus’ 5G network coverage is through its 5G Home Broadband plan. The company’s broadband plan comes in a 24-month contract that costs $70 per month with no installation fee. You can opt to pay a $200 start-up fee to get a lower monthly rate. The plan gives you unlimited data, a Nokia 5G Modem, and a guaranteed minimum data speed of 50Mbps.

Optus has managed to set up 5G mobile network sites across every state in the country besides Tasmania, from NSW to VIC, SA, QLD, and ACT. Most of these sites are concentrated in densely populated areas within the cities.

Vodafone was the first company to implement a test run of its 5G network, but it’s also been the last among Aussie’s top telcos to launch its 5G network. Vodafone unveiled its first 5G site in Sydney in March this year, nearly a year after Telstra’s 5G launch. Nonetheless, the company has grand plans to expand its 5G network coverage across the country this year.

Vodafone promises that the relatively late arrival of its 5G network across various cities will be worth the wait. It says it will be one of the first to offer a 5G global roaming plan. Preliminary details of this roaming plan show that it’ll be available for a $5 fee monthly fee across selected countries.

On the local scene, the telco giant is planning to establish at least 650 more 5G network sites and, ultimately, a whole lot more before the year runs out. These sites will bring Vodafone’s 5G network coverage to neighborhoods in Sydney, Melbourne, Brisbane, Canberra, and Perth by mid-2020.

Urban areas will get 5G first, but as the roll out continues, the wireless technology will eventually be available throughout Australia. In the meantime, all three of Australia’s major telcos fave turned on 5G in select areas. So far, Telstra is ahead and Optus is second as far as 5G coverage.