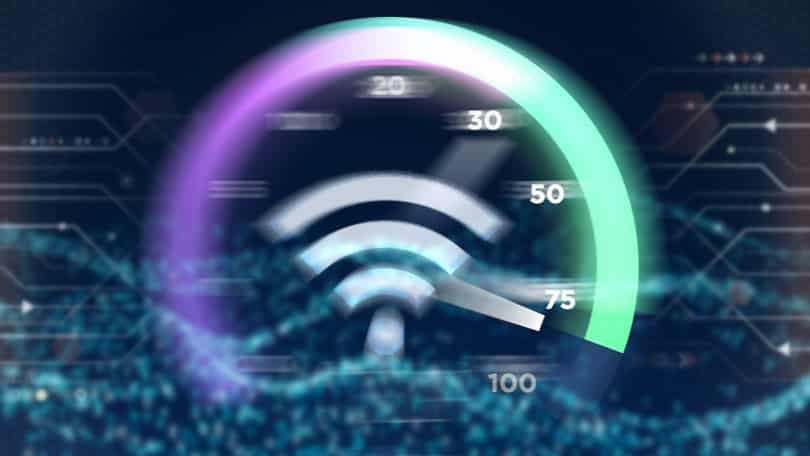 The Australian Communications and Media Authority (ACMA) has fined seven telcos for violating its consumer protection rules. Apparently, these telcos misled customers by being unclear or lacking in information regarding the speeds of their NBN (National Broadband Network) plans.

Aussie Broadband, Activ8me, Flip TV, Hello Broadband, Mate Communicate, My Net Fone, and Telechoice, were all fined around $12,600 each, leaving the ACMA with a total haul of $88,200. The ACMA believes this fine is substantial enough to serve as a deterrent, pointing out that the particular telcos in questions aren’t big companies. 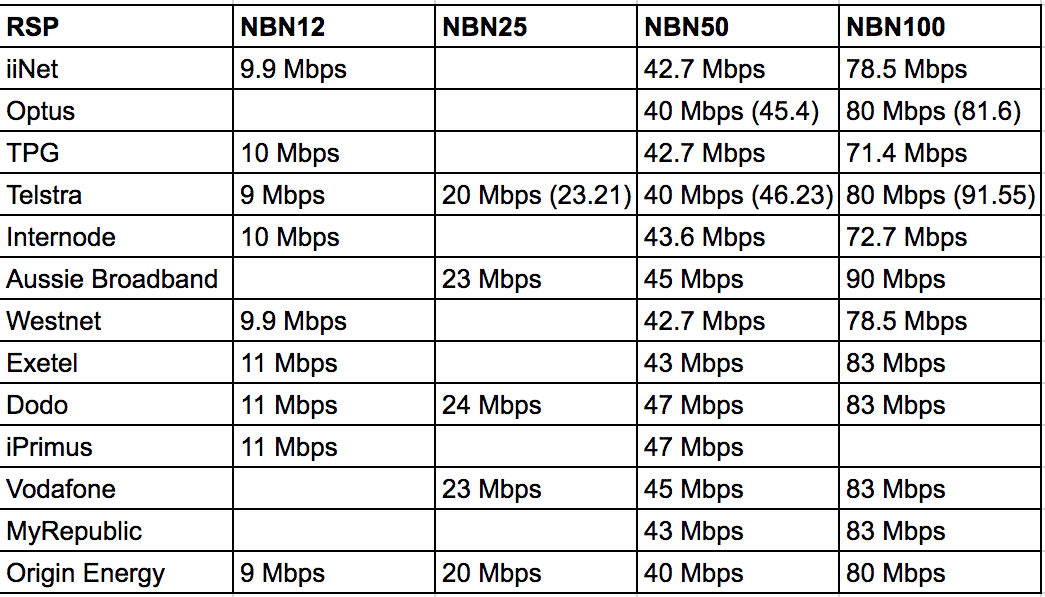 NBN tiers do not show actual speeds, but rather maximum speeds. Source.

The new rules in question went into effect in September of last year. It requires clear and meaningful information about telcos’ NBN plans, and only asks for a one-page KFS (Key Facts Sheet) to fulfill this requirement. The requirement seems quite simple, somewhat similar to the CIS (Critical Information Summaries) that mobile service providers must provide for each plan.

In regards to NBN service, telcos’ KFS must contain complete, clear, and honest information about their NBN plans, and this includes the details about how slow their speeds might be during off-peak hours. Aussie Broadband, for instance, was said to have provided misleading information when it advertised its plans nicknamed as “Family” and “Everyday”, but then only referred to speed tiers in its KFS, all while failing to let customers know that its advertised off-peak speeds were, in fact, maximum speeds.

Because the ACMA’s rules have already been out for about a year, the regulatory body expected that telcos would have been compliant with the requirements by now. This is understandable, especially when you consider that the rules only require a one-page KFS — simple, clear information about advertised NBN plans.

Are the fines strong enough?

The ACMA fined the seven telcos $12,600 each, for a total of $88,200. This may seem like a tiny amount for service providers that rack up millions in annual revenue. However, Fiona Cameron, member of the AMCA, points out that the seven telcos in question aren’t that big, and so the fined amount is significant enough to serve as a deterrent.

Apparently, Cameron has a point in this regard, as the telcos in question are now in compliance with the AMCA’s rules.

Are the new rules necessary?

The NBN itself can be quite confusing, thanks to its tiered system. NBN speeds depend on what tier you’re on. Also, the speeds and service depends on the provider, even though they all offer plans via NBN infrastructure. The different providers then muddy the water even more when they advertise their services without specific information about whether advertised speeds are off peak, peak, maximum, or minimum. 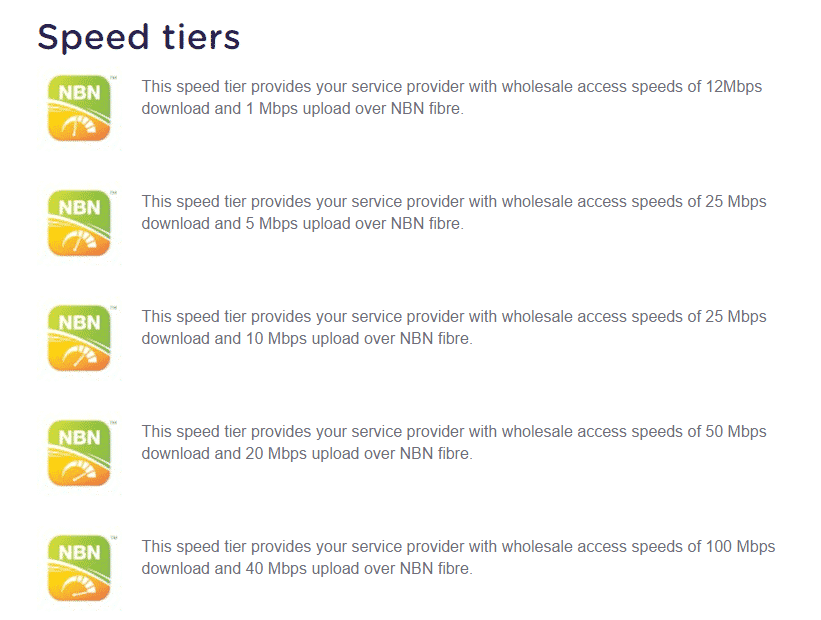 NBN speed tiers determine your maximum speed, without considering any factors that might interfere with such speed. Source.

As a result, clarifications are needed for consumers to be able to make informed decisions as to what provider and plan to purchase. Of course, telcos would be all too happy to sell plans with less information, and that’s where the ACMA steps in on behalf of the consumer.

Prior to the ACMA, there were similar rules put in place by the ACCC (Australian Communication and Consumer Commission), which also saw similar violations. For example, the ACCC fined MyRepublic $25,000 last year for running misleading ads about its NBN speeds between December of 2017 and April of 2018.

Apparently, MyRepublic boasted of “up to NBN 100 speed tier” and “NBN 50 speed tier” where, in reality, this wasn’t always the case for the customer. Despite using the term “up to”, the ACCC described MyRepublic’s claims as painting a picture of an NBN service that’s either at the advertised speeds or close to it, at all times or at least almost every time. This, of course, wasn’t the case, as NBN speed tiers cite the highest possible speeds, not accounting for factors that reduce such speeds such as congestion during peak hours or busy periods. MyRepublic sidestepped that fact and advertised the tiers without clarification as if they were attainable all or most of the time.

The ACMA’s recent fines of the seven telcos is therefore necessary, because although the rules are new as the ACMA is concerned, they aren’t really that new considering similar rules existed prior to the ACMA’s. Consumers have a vested interest in the service they purchase, and should be well informed by service providers prior to such purchases.

After being fined, the seven telcos decided to comply with the rules. Perhaps in the eyes of consumers the fines may not seem huge for telcos, but they seem to have done the job in this case. What’s even more of a deterrent is the bad publicity these telcos are getting as a result of the ACMA’s fines.

Misleading advertisements do real damage to consumers, and so these rules and deterrents are necessary. Quite recently, the TIO (Telecommunications Industry Ombudsman) stated that telemarketers pressure consumers into purchasing NBN plans with scare tactics. Most consumers that do fall for such tricks really don’t want or need the plans, or they can’t afford them, and yet they enter contracts based on those misleading tactics. In 2018 alone, both businesses and consumers filed a total of 1,729 complaints regarding these misleading tactics used to sell NBN plans.

With the ACMA enforcing its rules promptly, perhaps consumers can be given a fair shake at buying only what they actually want, need, and/or can afford. Choice is important, and requiring these telcos to provide detailed information to the consumer prior to purchase is pertinent to consumer choice.