Why This New Data Plan is The Best Deal of 2017

This is an article about a single tablet data plan, the OVO $59.95 plan. If you’d like to see the full range of tablet / mobile broadband plans we have those on our Data Plans page.

Or you can see all SIM Only Plans.

Or all Prepaid Plans.

We don’t usually write full articles about price plans. The dollar / inclusions details in the plans of each operator change all the time. That can means our content is out of date (by the time it’s found) and that can lead to people making the wrong decision on the SIM Only Plan or Prepaid Plans to buy. That’s the opposite of what this website is here to do.

However, since the launch of OVO Mobile’s new price plans at the start of August, we’ve seen a huge numbers of sales of this particular plan. Taking a look at what’s underneath this phenomenon offers interesting insight in to the impact that the new OVO range has had on the market in the few days since it launched. 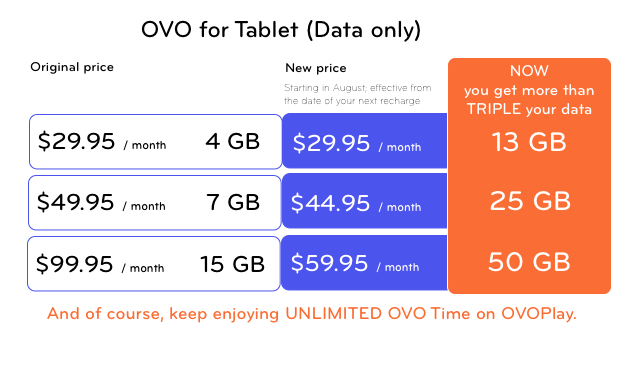 OVO’s $59.95 mobile broadband bundle vs Optus’ $70 mobile broadband bundle:
Optus are the only telco who have taken the bold step of offering this sort of plan before OVO. Comparing Optus and OVO, OVO wins hands down. For a start, Optus charge $10 more (their 50 GB bundle is charged at $70, compared to $59.95 for OVO.) In fact, Optus limit the speed of their mobile broadband SIM, where OVO don’t, so in some ways, although they use the same network, OVO’s plan is better.

The key point to remember here, when putting Optus and OVO side by side on the plan, is that you will get exactly the same coverage with either OVO or Optus.

OVO’s $59.95 mobile broadband bundle vs Optus’ $70 mobile broadband bundle:
The closest service Telstra offers to OVO’s $59.95 plan is $55 for 10 GB of data on a postpaid month to month agreement. It’s not surprising to see Telstra struggle to keep up in this area. Despite the 5 outages they’ve suffered this year and independent evidence suggesting that Telstra’s network is no longer the unqualified best Telstra still insist on trying to charge a premium for the phone services they offer. Data now represents the majority of value that users derive from a phone plan. If Telstra start offering 50 GB for $59.95 on data only plans, they would be undermining their more standard, higher volume voice and data plans – which also start at $50 ! This creates a bit of a Catch 22 for Australia’s biggest telco. They will be hoping that not too many people notice OVO’s new plan.

OVO vs Optus Fixed Broadband:
Optus Fixed broadband pricing starts at $80 as I write this article. It provides unlimited data through an ADSL connection for $80.

In addition to the above, this plan has a more standard benefit. It’s a prepaid data plan. Prepaid as a payment mechanism is a much maligned and often misunderstood product in telco. For a super-fast mobile data connection likely to be shared between people, it’s perfect. With any prepaid servive, you know that the most you’re going to spend is $59.95 until you choose to recharge further down the line.

What’s bad about this plan:

When we heard about their new range and started adapting the content on the site, we knew that OVO’s new plans were going to be a big deal. They’ve changed the face of telco in three ways at once and one of the most impressive is with this data plan.

As most people know to their chagrin, it’s not easy to find a phone or tablet data plan which is different in the market. The problem is not usually that telcos have too many USPs to talk about. With OVO, it is. They have free streaming video content relating to Australian Drag Racing, Audi Customer Racing and Australian Gymnastics included as an extra in their plan. They offer a best price guarantee to their customers. They are selling data at $1 per GB – 10% of the competition’s voice plan additional data inclusions.

This is a big day for Australian telco in many ways and these disruptions are likely to keep going. From what we’ve seen, it appears that OVO really ‘get’ (customer needs around) data. They have per kB charging instead of the per MB equivalent some use. They zero rate (provide free of charge) their own content so you don’t have to worry about burning through it watching their videos. These things are the opposite of what the other phone companies do.

OVO are not perfect:
We’re not a massive fan of OVO’s checkout process for example. (Although buying online through OVO is much, much easier than messing around with Optus’ unnecessarily complex website.) It’s difficult to operate a 50GB plan you’re likely to share when you don’t have a self service app.

Additionally, this is not an entirely new concept. They had in car sets two years ago in the UK. The Internet is critical to so many people these days, finding that the same facility was required in Australia is not a surprise.

50 GB is a shockingly large bundle but then the use of data is doubling every year and has for a long time. 50GB probably feels like a lot to you but a few years ago you would never have dreamed that you would be using the 3GB that you currently would, did you ? It’s use cases like the in car transport we mention above which start to set this data plan apart.

Whether you buy the plan for a new need or to replace a fixed broadband connection you have will depend on how much data you need. At the moment, there is a way to go before OVO match the fixed line pricing of the competition as you’ll see from our table above.

We suggest you keep your eyes peeled, if they keep disrupting like this, they might be matching Telstra’s fixed broadband pricing next week.